Debunkery - The Loophole Leap of Logic

Saw another ridiculous meme on Facebook last week… actually, there were several; most were versions of this: 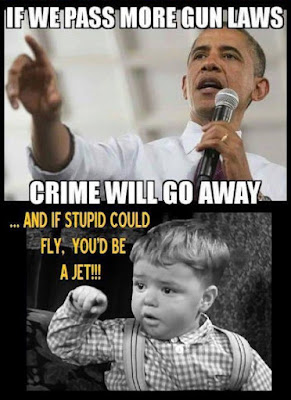 Easiest debunking ever, for the simple reason that no one ever said, “If we pass more gun laws, crime will go away.”  Obama didn’t say it, gun opponents don't say it, no one with a functioning brain would ever say it, but here it is on a conservative meme.

See, it’s the oldest debating trick in the book… reduce your opponent’s position into something preposterous and then attack it as if it’s what your opponent believes.

You know what made Jon Stewart such an effective advocate?  He didn’t just tell you about some stupid shit people said, he’d show you them saying it.  And THEN he’d pull it apart like an Oreo Cookie, and roast the gooey center inside.

I look forward to the day when there can be a serious discussion about guns in this country.  But that time is not now… and probably not ever.  Because even the baby step of requiring background checks is being met with such ferocious opposition full of bluster and hyperbole, and precious little substance.

Can someone tell me what it is that’s so special about gun shows? Why do they get a pass on doing background checks and legitimate gun shops don’t?  It can certainly be done. 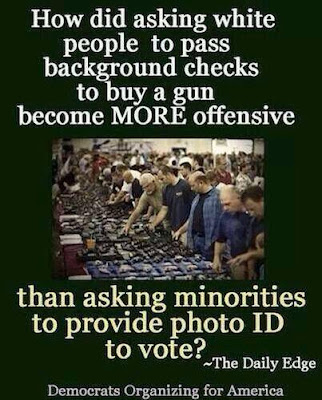 And for that matter, what possible reason could there be for just about every single Republican in the Senate vote against requiring background checks include the terrorist watch list and no-fly list?  I haven’t heard a single legitimate reason behind that.  Not one… probably because there aren’t any.  But it still got voted down, didn’t it?

Thus is the power of the NRA.

Did you see any of the footage of Congressmen and women getting up on the floor of the House and railing against gun show background checks?  My God, they sure made a sight, one after another, condemning the President for abusing authority, undermining freedom and coming to take their guns away!

CSPAN should have had a graphics package under each speaker’s name, showing how much the NRA had contributed to their last campaigns.  Then we could see exactly who they were performing for.

Oh, and by the way… all this “Obama the Dictator, abusing his power” bullshit? 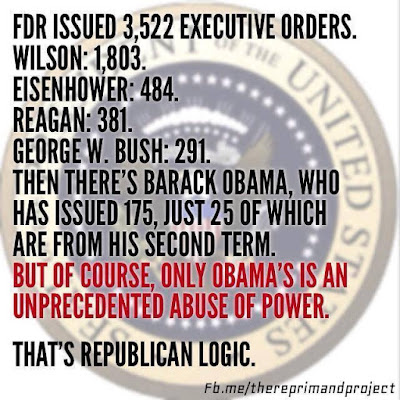 If you really think this president is some kind of self-governing despot who’s running around mad with power, you’re too stupid to have me take your opinion seriously.  The facts overwhelmingly show that you’re wrong.  Not that it ever stopped Fox “News” or any of the ninnies they whip into a frenzy. 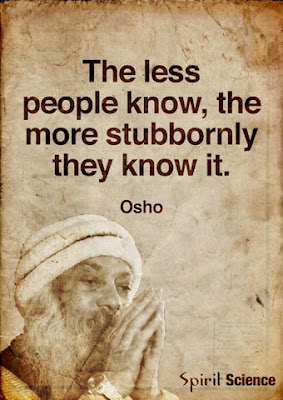 It’s the same logic that allows Republicans to continue beating the Benghazi drum for years while completely ignoring the 11 Embassy attacks under GW Bush. 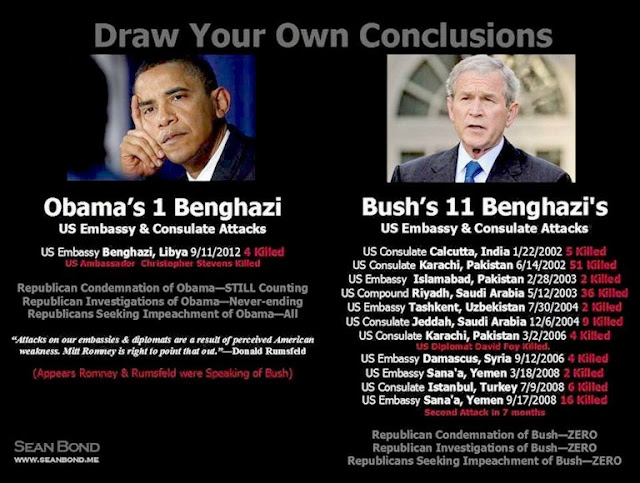 I’ve said my piece on assault weapons before, and on the general gun-mania in the wake of the Sandy Hook shooting, so I don’t really have much to add.  The President enacted a mild piece of executive action that might make it a little harder for criminals, terrorists and whack jobs to get their hands on rapid fire killing machines.  It won’t fix everything, not by a long shot.  And it will probably be reversed by the next GOP president.

I’d call it a good first step if I thought there were going to be any more steps.  But there won’t be.  If this country couldn’t be moved to come up with some common sense rules for gun ownership after a room full of 6-year olds was slaughtered, I’m afraid there’s nothing left to shock people out of their gun lust.

There’s only one Constitutional right that anyone cares about anymore, and that’s the 2nd Amendment.  All the others seem to be afterthoughts.

Director’s DVD Commentary: You might have noticed that I used a number of memes myself in this post.  Yes, I did, and I used them because they’re strong, on point and not loaded with logical fallacies.  See, it can be done.  Granted, it helps if you’re trying to make a valid point. 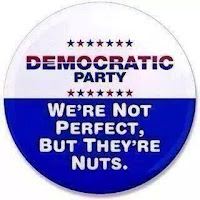