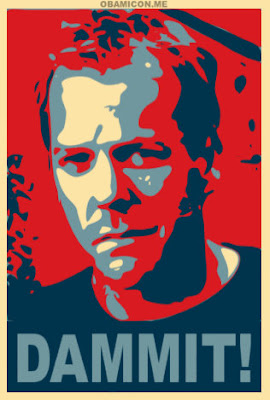 Yep, I’m still pissed about the game.  The Pack won fair and square, 31-25.  They made the big plays to capitalize on our bad plays.
As opposed to what happens when the Ratbirds lose a game, the Steelers, to a man, stepped up and accepted responsibility for the loss.  Ben said it was his fault for the interceptions.  Mendenhall said it was his fault for the fumble.  Polamalu said it was his fault for not making more big plays or stopping the Packers on defense.  Specifically, Troy said this:
“I was a step off here and there and we didn’t make plays.  We were unable to get any turnovers on defense; that was the difference.  They made plays on defense and we didn’t.  They played a great game.  They’re deserving of Super Bowl champs.”
Hines Ward said, “They were the better team tonight.”
That right there is honesty and accountability.  Even in defeat, the Steelers still do their fans proud.  I’ve never seen any Ratbird player come anywhere close to that kind of statement, which is another, reason I loath them the way I do.
So let’s go through some of my game day observations, shall we?
The Omen Part 1
I knew it was a bad sign when the Pens lost to the Capitals yesterday afternoon and didn’t look good doing it.  I probably should have concentrated on the game more, but I was pretty wrapped up in blogging and tweeting and pacing around.  Perhaps a better jersey selection would have helped.  Or more specifically, any jersey selection would have helped.  I haven’t worn a Pens jersey for the previous 4 games and they’ve won, so I’ve been riding that streak.  I’ll be suiting up tomorrow night, for sure.
Highlight of the game was the Capitals defensemen getting hit in the head with a puck.  Immediately, all the Caps fans stood up and began gesturing wildly and yelling for a penalty.
Bag the Carpet
I was really hoping for a quality pre-game experience.  Man, was I ever disappointed.  I kept flipping between Fox and the NFL Network.  Both were bringing the “lame.”  I mean, what’s with all the red carpet crap?  There’s no red carpet in football!  The Super Bowl is a game ticket and a flask, not a red freakin’ carpet!  Like I want to hear a bunch of celebrities promote their next movie then mumble about the game when it’s clear they have no idea what they’re talking about.
I think John Travolta has a career in politics (or maybe coaching), given his rambling answer wherein he spoke for 45 seconds on which team he thought would win, while saying absolutely nothing.
Harrison Ford looked and sounded like he just got up from a nap.  I used to like him until he wore that green scarf.
Owen Wilson sounded like he was stoned to the bejesus, but then when isn’t he?
All day long I’ve been seeing on TV and online where people are saying that Troy Polamalu has been ineffective during the two playoff games.  And I don’t mean the usual message board morons; I mean the “expert” analysts on TV.
Has it not occurred to anyone that playing deep, covering receivers and destroying the passing game does not equal “ineffective?”  Just because there haven’t been any flying tackles in the backfield does NOT mean the man isn’t doing his job.  I think Troy has spoiled us to the point where we can’t appreciate his job-well-done unless he does something super-human.
Cowboying Up
Hey Fox, WTF is up with all the Cowboys bullshit during pregame?  The Cowboys didn’t even make the playoffs, yet there they all are having a circle-jerk over how great it was to be Cowboys.  Hey Jerry, why don’t you talk about the ruined experience for all those fans that weren’t allowed to take their seats in your expensive stadium, because you couldn’t get the temporary seating done in time?
OK, Jerry’s stadium/homage to ego is real big.  Can we please talk about the game now?
The Omen Part 2
For the love of all that’s holy, can we get Steely McBeam the hell off of the sidelines?  I saw him there during the pre-game.  I’ve never seen a mascot less liked by his team’s own fans.  From what I can see, he contaminated the whole place with mediocrity. 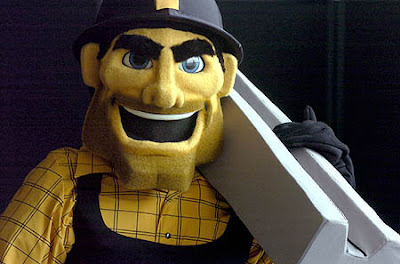 No wait, maybe I shouldn’t post his pic or else this site will also become… nahhh, never mind.  That horse has long been out of the barn.
Dis-Concerting
Enough with the pre-game concerts, too.  Well, OK, it’s not a bad idea to have them there for the crowd, but do we have to broadcast that shit too?  Keith Urban was bad enough, but that Maroon group?  They sounded like a bunch of weenies.  It was NOT football music.
You want a pre-game concert?  Book George Thorogood.  He’ll get out there and rock those people senseless.  He’ll sing about cars and drinking and partying and ask you “Who Do You Love?”  That’s football music.
Black Eyed Peas at halftime?  Screw that.  Football music should be hard pounding rock and roll, not heartless, soul-less electronica.  Bag the Black Eyed Peas and book AC/DC.  Hell, every stadium in America already uses their music in-game.  “You Shook Me,” “Thunderstruck,” “Heatseeker,” and “For Those About to Rock.”  There’s your set right there; no naughty words and guaranteed to rip the fake roof right off the place. 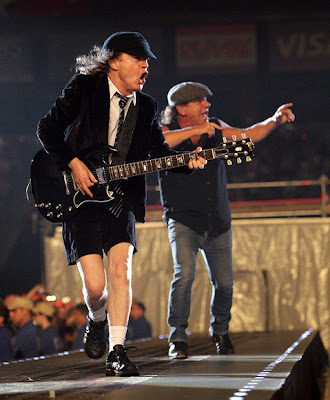 We salute you, mates.
And as an olive branch to the nation’s youth, Fergie can stay on the stage and dance, as long as she stays out of Angus’ way.
Strange Bedfellows
Did we really have to drag politics into Super Bowl Sunday.  Not missing any chances to hype their own talking heads, Fox had commentator/gargoyle Bill O’Reilly interview President Obama.
I would comment on the substance of the interview but I turned to the NFL Network instead.  Can we not escape all the political bullshit for even a day?  Please, give us Super Bowl Sunday for football, then we can go back to making up lies about each other for the next 51 Sundays.
And Now a Commercial Break
The commercials were OK.  Most were spoiled for me because they were featured on the “Best Super Bowl Commercials” show the night before.  Though it wasn’t well received, my favorite was the Audi-Breaking out of Rich Jail spot.  I thought it was wildly clever.  The Kenny G stuff slayed me.  I also liked the Star Wars spot and the CarMax “Mixed Metaphors” bit.  Again, very clever.
Meet the Packers
I hate it when people cry about announcers being biased so it pains me to become one of them.  Now I’m not saying that the Fox crew was doing anything as blatant as rooting for the Packers to win, but they were verbally felating every thing they did.  You know, the Steelers had some injuries too this season, (both offensive tackles, their Pro-Bowl center, Pro-Bowl defensive tackle, played without their QB for 4 games and All-Pro safety for two, and so on), but all we heard was about how Green Bay has overcome their injury-riddled season.
Know what?  Join the fucking club.  Every Super Bowl team overcomes injuries.  It doesn’t make them special.
I know that Fox does the NFC broadcasts and maybe it’s just that the announcers know more about them but it seemed that every point brought to bear was filtered through how it affected the Packers.  It was like everything was from their point of view.  I noticed it.  Did you?
Since I’m crying about announcer bias, I might as well complain about the refs.  First half: 5 calls on the Steelers, 0 on the Packers.  I’m not even saying they were bad calls, but there were none on the Pack.  They at least should have called one when they tackled Mendenhall by the facemask.  At least I think that’s what it was.  Fox never showed a replay.  But it sounded like a stadium-full of people that saw the replay on the scoreboard agree with me.
The refs began making calls on the Pack in the 2nd half, but by then the damage was done.  Penalties sapped the life out of every promising drive the Steelers had and consequently the Pack shot out to a 21-3 lead.
It's Hip to Have Squares
The Packer’s 21 points at least put me in range of hitting one of my pool squares.  I had “1” for the Packers and that paid off for 3 quarters for people that weren’t me.  Unfortunately, I had a Steelers “8”.  One more FG would have done it for me once they ran that 2-point conversion, but no dice.
On the bright side, the Packers winning saved me about $200 I would have otherwise spent on buying Championship swag and 7-Time Champion stuff.  And all of my 6-Time Champion stuff is still valid.  I’ll take my silver linings where I can get them.
All in all, this one isn’t nearly as bad as the Super Bowl XXX loss.  I don’t hate the Packers the way I hated those Cowboys.  (In fact, I don't hate them at all.)  And the game didn’t effectively end on one stupid mistake.  So I can live with this.  I don’t like it, but hell, no one expected we’d get this far at the beginning of the season.  It was a great ride and I’m proud of my boys.
And most importantly, we did better than the Ravens. 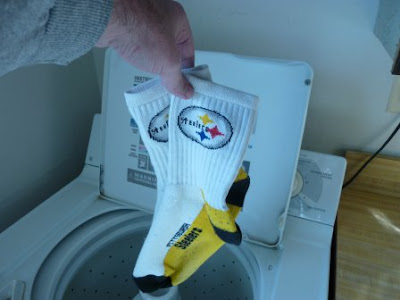