The most recent post on Hyperbole and a Half, aka the Funniest Blog of All Time, gave me the idea for this one.  The “Hyperbole” post was about the author when she was a 6-year old girl and her nightly battles with her demons; in this case a Fire Monster living in her closet.  She resents her 3-year old sister for sleeping so obliviously to the danger at hand so her solution it to tell her sister the scariest story she could think of.

It got me thinking about the years I spent sharing a room with my younger brother.  We cohabitated from the time he was born until the time I was a sophomore in high school.  Until then, I didn’t even remember a time when we didn’t share a room.

First of all, we really didn’t have much in the way of night terrors.  Dad wouldn’t allow them, I suspect.  Mom used to tell us when we were sick, that we could come and get them if we needed them in the night.  But I knew that I would have to be bleeding from my eyes before I’d go in there and wake up my parents at night.

They usually left the door cracked… it was the least disruptive.  And Dad always said, “You can’t see the light if you close your damned eyes and go to sleep!”

Often times, Ed and I were too punchy to just go to sleep.  We didn’t dare to actually get out of bed… that invariably invited a visit to our room from Dad… a visit we definitely didn’t want, thankyouverymuch.

Instead, we’d try to make each other laugh.  It wasn’t anything elaborate… just fart noises and stuff.  But it passed the time until we actually got sleepy.

But while we weren’t necessarily afraid of the boogeyman in the closet, the alligators under the bed were another story.  I NEVER let anything hang out from under the covers and over the edge of the bed.  I figured that alligators were a much more realistic threat because they’d fit very nicely under the bed.  There was no room in our closets for any boogeymen.

In fact, there was only one imaginary being that ever came around and my brother was the only one that ever saw him.  His name was Boo-Man.

According to Ed, Boo-Man wore a hooded mask and cape.  It didn’t take too much investigation to figure out where he got such a notion. 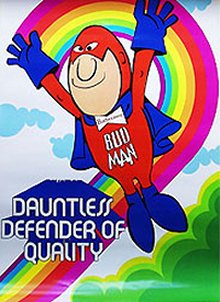 You can imagine a little kid looking at that, seeing the capital UD and mistaking it for OO; hence BUD MAN becomes BOO-MAN.

According to Ed, Boo-Man’s chief occupation was hiding in the bushes and farting on people that came by.  He used to regale my mother with detailed stories of Boo-Man’s adventures… the places he went, the people he farted on, etc.  She must have been very proud.

I tell you, every time Ed’s son Sammy talks about his NNNNNUTS, or drops a fart on his older brother, I realize that it’s inevitable given his lineage.  He is his daddy’s doppelganger.  I wonder if they have any Bud Man costumes for kids any more.

The only night terrors were experienced by my sister at the hands of my brother, during those rare occasions when we all had to share a room, like on trips to Grandma’s house.

Ed and I would be in a double bed and my sister would be on a cot, across the room.  He used to be a master at slithering out of bed, snaking across the floor, then popping up by our sister’s bedside, scaring the shit out of her.

It was a dangerous process because there was always the risk that she’d cry too loud, or worse, go downstairs and tell.  Ed used to roll the dice on that one.  Luckily the parents were usually carousing downstairs with the rest of the extended family, so unless it was a real meltdown, it passed unnoticed.  Although, not by my sister, mind you.

I remember once, when I first moved to Baltimore (in my late 30s), I stayed over her place one Halloween and we played scary movies all night.  I know we watched “Halloween” and I think we also saw “The Exorcist” and “Aliens.”

I remember the next morning telling my sister that she should be thankful that I didn’t creep out of bed, sneak under her bed and start shaking it.  I’d considered it, but couldn’t be sure she didn’t bring any kitchen knives in there with her.

You know, my brother and I really should have offered to chip in on therapy for her.

There was only one thing that ever shook me up at night.  It happened twice.

The first time, I was in Jr High and was old enough to “baby-sit” while my parents went out to dinner or a party or something.  So one night, after we were all in bed, but before the folks came home, I heard noises.

Just like that… in sequence.  It sounded exactly like someone walking up the hallway to our bedrooms.  Our room was right over the garage, so I knew it wasn’t Mom and Dad.

Holy shit, I was petrified.  Ed was sound asleep, but I was stiff as a board, too scared to move, too scared to even breathe.  You know what it’s like… you figure if you don’t move, the Bad Guy might go away.

I must have laid there motionless for a solid hour… it seemed like an eternity… senses on full alert, straining to hear any clue as to if there’s really someone out there or not.

Finally, I heard the greatest sound in the whole world… my parents’ car pulling into the garage.  Whew, my Longest Night Ever was finally over.

We chalked it up to the house settling.  Whatever… all I know is that was the first and last time it did that.

Then a couple years later, after we’d moved up to the old farmhouse in Toledo, the same thing happened.  The folks were out, we were all in bed, all in our own rooms now, and I started hearing all kinds of strange creaks and thumps.

While I wasn’t nearly as terrified as I had been the first time, I was still concerned and more than a little bit alarmed.  It really sounded like someone or some thing was messing around downstairs.  And I thought to myself, “If someone came up here, what do I have in my room that I could use to defend myself?”

I concluded that the most dangerous thing could put my hands on was a steel-toed work boot.  That did not give me much comfort.  To this day, I’ve never heard of someone beating back an intruder using nothing but footwear.

Once again, the folks came home and all was well.  But the very next morning, I went out to find something that I could take back to my room to give me piece of mind.  This is what I came back with: 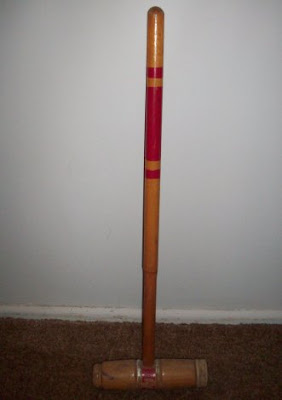 “Don’t come fuckin’ near me or I’ll blast you right in the wickets!”

I know it would look silly, me standing there wielding a red croquet mallet like a samurai sword, but I certainly wouldn’t want to risk getting the business end of that thing smacked upside my head.  So I knew that I’d never again lack a plan for dealing with spooky, creaky night invaders.

And you know what?  In the subsequent 35 years, I’ve never once had that situation arise again.  And do you know where that mallet is?  It’s still right beside my bed.

I’ve taken it with me to every house or apartment I’ve lived in and have always kept in within reach of my bed.

I must admit though, it’s more for the mojo now than a real weapon.  I upgraded back in the 90s: 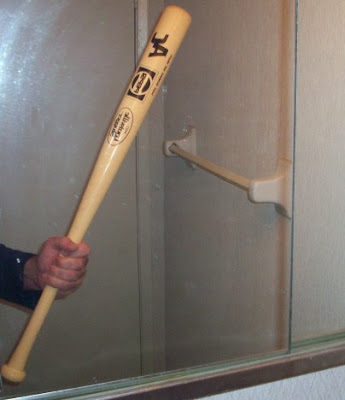 I keep him right beside the mallet.  Anything that comes in my door unexpectedly at night is liable to see me swinging for the fences.

I just have to remember to keep the label facing away.  I’d hate to crack the bat.
Posted by bluzdude at 8:05 PM

Email ThisBlogThis!Share to TwitterShare to FacebookShare to Pinterest
Labels: Best of Darwinfish, Bluz LIfe, Stories and Misadventures, The Family Business