It’s been interesting to watch the institutional panic set in with the Republican Party, as it looks more and more like Donald Trump is a shoe-in to be their presidential nominee.  The reason for the panic, I believe, is that in addition to being unpredictable, they can’t control him.

Because of his wealth and name recognition, he doesn’t really need their money or the party machinery.  That frees him up to do pretty much whatever he pleases.  And everyone who’s tried to attack him has gotten their asses handed to them.

Fox “News” seems to have a love/hate relationship with him, depending on what week it is.  But Trump has already shown that they need him more than he needs them.  He’s getting free coverage from all the networks, of everything he says and everywhere he goes.

I’ve mentioned it before but Dilbert cartoonist, Scott Adams, has been running a series of fascinating blog posts which explain why Trump appears bulletproof; triumphing over gaffes that would end the campaigns of anyone else.  In fact, he predicted back in August, that not only would Trump win the nomination, but he’ll win the general election in a landslide.

You can find a complete listing of all his applicable posts, AKA the Trump Master Persuader Series, by clicking here.  But be careful, you can totally go down the rabbit hole.

The general point is that Trump is highly trained in the art of persuasion. While he may seem like a content-free, gaffe-spewing bumbler, everything he says has a specific purpose.  He speaks in images and identity, not specifics.  He leaves out detail so the listener can supply his own.  He speaks “past the sale,” so subconsciously, people already picture him as president.  And he is the master of the linguistic “kill shot.”

If you’re paying attention to the race, you likely know who the recipient of each of those was, because they were designed to stick.  (Granted, the last two were for one candidate.)

Adams also points out that some of Trump’s most extreme positions, (building the wall and having Mexico pay for it, banning Muslim immigrants, etc.) are not actually intended to be enacted as is.  Rather, they are the opening positions in a long negotiation, coming from a guy who’s an expert in deal-making.  And should Trump win the election, look for him to be pragmatic in getting the best deal that can be had, rather than sticking to the opening bid.

So what do I think?

I’ve enjoyed looking behind the curtain on the campaign, but I think a Trump presidency would be a disaster for the middle class.  The one-percenters will continue to reap record profits, as per custom during modern GOP administrations, but the rest of us will have to hear a lot about “austerity.”  We can’t afford Planned Parenthood or SNAP, but heaven forbid we cut the defense budget. 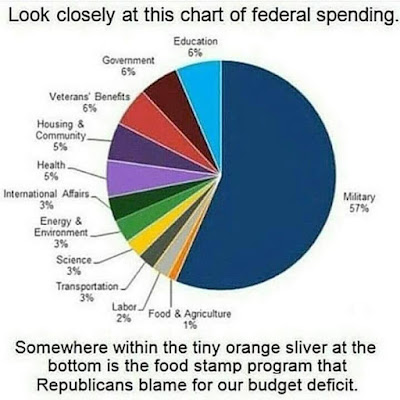 Granted, the same would be true under Cruz or Rubio, but I’d prefer the guy who’s not a religious zealot.

To me, the thing about Trump’s campaign is that I can’t respect the lack of substance.  I’m the kind of guy who wants to know HOW a process is going to work.  I’m not satisfied with a campaign based on 4th-grade level vocabulary.  It’s the very definition of lowest common denominator politics.

Don’t tell me “Many, many people think this is a good idea,” tell me how many, or cite an independent poll.  Don’t tell me “many Mexicans coming over the border are murderers and rapists.”  What are the stats and how were they gathered?  If you can’t quantify it, I don’t believe it.

But politicians don’t want to give that kind of evidence because there usually isn’t any, or if there is, it’s underwhelming.  This is a political campaign and the rules of right, wrong, and common decency do not exist.  The amount of misinformation getting put out there is staggering.  They tell lies they know are lies and when they’re reported as lies, they blame a biased media.  The only thing that matters is corralling votes by playing to people’s prejudices.

And if Trump is bad, his followers are even scarier.  I haven’t seen this kind of nationalistic fervor since the 1930s (via newsreel).  Trump can claim up and down that he’s not racist, but when his policy ideas become rallying cries of avowed racists and white supremacists, the personal attestations to the contrary don’t really matter anymore. 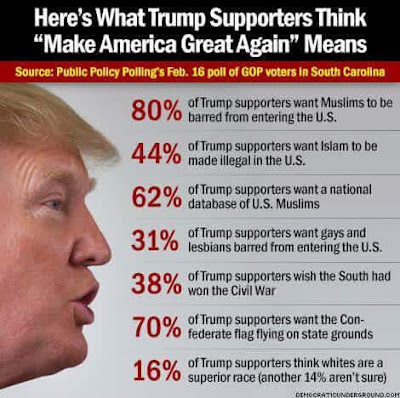 It’s funny how these idiots proclaim America to be so great, so exceptional, and so free, yet their first order of business is to turn America into a Christian version of Iran.  Cognitive dissonance, anyone?

And it’s no wonder there’s such a large market for Trump’s simplistic platitudes.  Most Americans are just not trained in critical thinking and that’s by design.  The powers that be don’t want educated people; they want pliable people who are educated just enough to get a job, but can be influenced to vote against their own best interest.  Trump’s not the first person to take advantage of that. 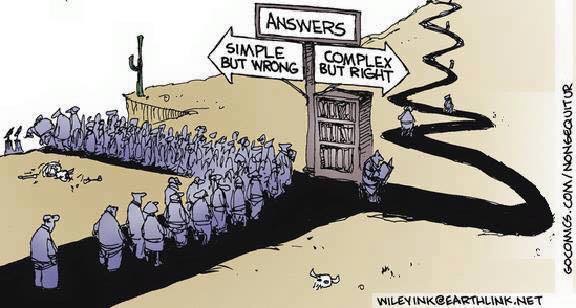 So, tomorrow should be telling, once the Super Tuesday votes have been counted.  If the Trump machine continues to roll, the Republicans will have a decision to make: Do they get on board, or sacrifice the will of their low-information voters to scuttle the whole thing through back-room convention deals?

Personally, there’s nothing I’d like to see more than a crash and burn, but I don’t think that’s likely.  They already ignored the lessons of the last two elections and doubled down on playing to angry white men and religious wing-nuts.

And now their chosen constituency is selecting an unpredictable, self-financed, uncouth steamroller.  I don’t see how they can ignore the will of their people and then expect them to turn out in November.

If only the 1% took up a greater share of the electorate, right?
Posted by bluzdude at 6:17 PM