Planks for the Memories

I don’t know if I’m surprised or not at what’s gone into this year’s Republican national platform.  It’s the most backward, regressive, trying-to-put-the-toothpaste-back-in-the-tube platform they’ve ever constructed.  All I can say is that they must feel really secure in their voter suppression strategies because it appears they’ve learned absolutely nothing from the last two elections.

Remember how they were going to try to be more inclusive?  Right, that’s out the window.  This platform doubles down on well to do angry white straight men and the women who dutifully walk two steps behind them. 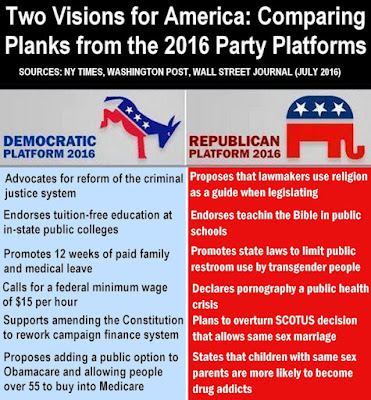 They also reject climate change science and have gone so far as to recommend the burning of “clean coal,” which couldn’t possibly be more oxymoronic.  Just calling the dirtiest fuel source we have “clean” doesn’t make it so.  (If it was, I would have used that logic on my mom when she wanted me to clean my room.)

They attack pornography as a public health “crisis,” as opposed to the tens of thousands of gun-related deaths every year.  And speaking of health crises, (although unrelated to the GOP platform), the Republicans in congress refuse to pass a bill allocating funds to combat the spread of the Zika virus, that does not carry a prohibition of funds for contraception, which just so happens to be the best way to combat the spread of the Zika virus.  Maybe they want to do like they try to do with gays and pray the Zika away.

That’s another thing in the platform: recommending conversion therapy for gays, a process that’s been 100% discredited by all reputable psychologists.  This should be the GOP motto: “It’s not just environmental science we’re ignoring now.”

Obviously ending Obamacare is one of their priorities, because we can’t have all these people with insurance, because… well, sorry, I’m at a loss for the downside. 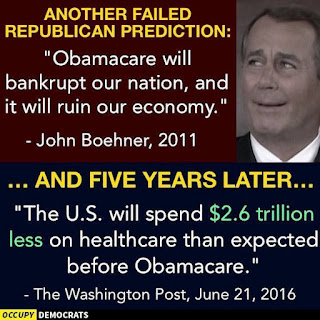 Trump sure picked the right guy for the VP spot. 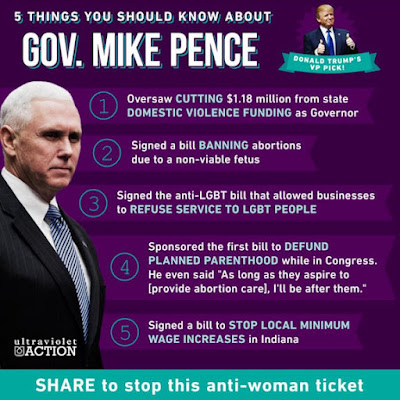 Indiana governor Mike Pence is a True Believer, which is just the thing needed to bolster Trump's recently discovered religious beliefs.  Pence was willing to break his state’s economy over a bill that gave businesses the right to discriminate against gays.  Anyone can talk a good game of repression, Pence has walked the walk.  I bet he uses one of these: 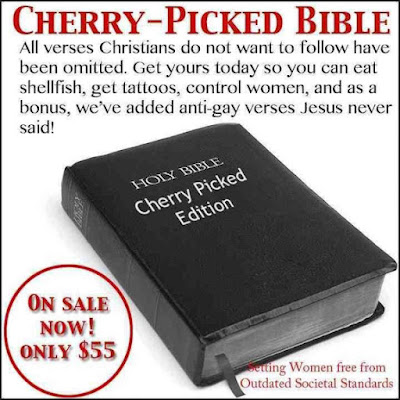 The metaphor I used earlier it true; they’re trying to put the toothpaste back in the tube, trying to un-ring the bell, closing the door after the horse is out of the barn.

Have you ever tried to take rights away from the people who have them?  They think gay people are just going to go, “Well, OK, we tried doing the married thing, but we’d really feel more comfortable if we could go back to being second class citizens.”  Do they think poor people are going to go, “You know, I’d feel much better if I could just use the ER as my GP and skip out on the bills.”

People are not going to give up their hard-earned rights without a fight.  But the GOP doesn’t care about that, not when they’ve locked up the voting process.  It’s no accident that wherever they’re demanding government IDs in order to vote, they’re ALSO closing and limiting hours of DMV locations that service the poorest neighborhoods.  You know, because of “voter fraud.”

The only things that matter are what each party plans to do in Washington.

…roll back civil rights on LGBT folks and stuff them back into the closet where they will be neither seen nor heard.

…pretend environmental science is a hoax because it costs them money to change business practices.  (Ask Florida’s governor about what happens to tourist trade when your environmental policies lead directly to beaches filled with green crud.)

…end the right to an abortion in combination with eliminating the most effective means to prevent unwanted pregnancies.

…ensure that nothing prevents the rich from buying politicians and elections.

…continue finding places to send our troops and places to bomb, to keep the flow of tax dollars to the defense industry.

…kick millions of people off of their insurance plans, in place of some kind of voucher system they haven’t yet been able to explain.

…privatize social security, leaving our retirement in the hands of the same people who collapsed our economy in 2008.

…eliminate the Consumer Financial Protection Bureau, whose only mission is to keep banks from screwing its customers.

…initiate some kind of religious litmus test to apply to those who are legally immigrating, all the while trying to force their own religion into government policy.

…continue to prevent any progress on gun legislation of any kind, regardless of the toll in human lives.

The Democrats want to…

…it doesn’t even matter, because they oppose all the preceding points.

There’s only one thing that we can do to ensure we don’t move our country back into the Dark Ages, and that’s to make every effort to get people registered to vote, NOW, well ahead of time.  Time nullifies GOP voter suppression tactics and we have that at the moment.

If you have elderly parents or college student children, make sure they have the documents necessary to vote.  Some states require original or authorized copies of birth certificates, which can take time to obtain.

If they’ve registered before, you’d best find out if they’re still registered.  Many red states are aggressively purging voter rolls, with little double-checking and even less oversight.

Start the process now.  By the time October and November roll around, it will be too late.

Moving the country forward is the only way to go.  Once you start taking people’s rights away, (even if they’re not “your people”), it’s an awfully short step away from fascism.
Posted by bluzdude at 6:18 PM

Lotta empty barns, Bluz. Wish I were a locksmith. And my burning question: Why more asses than horses?