What a day this has been, here at the old D-Fish Command Center, a day in which justice has been served with some good old-fashioned fire and brimstone.

This morning, as I was poring over my “StatCounter” stats, I noticed that I was getting a lot of Google search hits on my post about the Solid Rock Church and their gargantuan Jesus statue:

Then I came to: “Touchdown Jesus burns down.”  Wow…

So I did my own Google search.  First, I have to say I was thrilled because my piss-ant little blog actually showed up on the first search page.  Then I found the story I was looking for:
“‘TOUCHDOWN JESUS’ STATUE AT SOLID ROCK CHURCH ON I-75 DESTROYED BY LIGHTNING, FIRE.”

Lighting.  From the sky.  How rich is the irony?  A bolt of lightning screams down from the heavens and smites this graven idol right between the eyes.  (Late edit:  OK, technically, according to witnesses, the lightning bolt hit the right hand.) 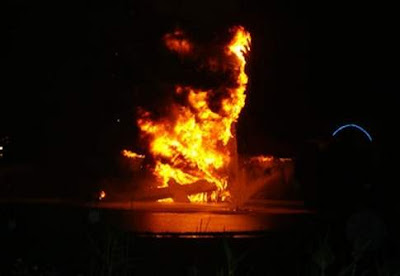 As far as "messages" go, this makes the ‘burning bush’ look like a backyard kiddie sparkler.

MSNBC picked it up and ran it under “News of the Weird,” although it was made up of the AP report.  The Enquirer had this video below on its website:

I emailed the story to my mom right away and she responded thusly: “Yes Sistas and Brothas, there IS a God and SHE hates schlock.”

You know that if something like this would have happened to a giant statue of some other non-Christian religious figure, or even a pop-culture or sports figure, the people in the Solid Rock Church would be hollering about it being the hand of God and Divine Retribution against false idols.

I wonder how they’re going to rationalize this, because it looks to me like a giant Fuck You Sandwich personally delivered to Mr. and Mrs. Bishop.  As I recall from my meager religious training, Jesus didn’t commission any 60-foot statues of himself.  He was a humble Dude that hung out with some fishermen.  He told people to love each other and give their time and money to the poor, not to build palatial estates in His name.  He spoke out against those that were using God’s word to make themselves look better.  You can see how Divine Retribution might be in order here.

Or, maybe He was up there in heaven talking to his old buddies…

“Yo Pete, you see that big-ass statue of Me down there in Ohio?  Is my nose really that big?  And what’s with the karate outfit?  That doesn’t look like Me, that’s Barry Gibb on a bender.  Hey guys, watch this…” 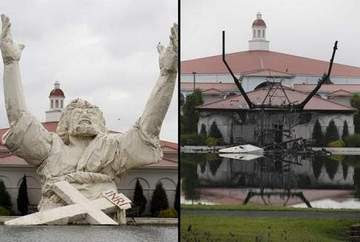 Now the thing looks like an outtake from The Transformers… “Optimus Referee.” 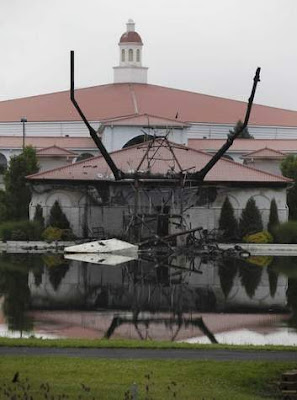 No longer scaring the shit our of little kids in the back seat.

In the AP story, Lawrence Bishop is quoted from 2004 as saying he was “trying to help people with the statue, not impress them.”

Hmmm.  Help people.  OK.  When exactly have you ever been in trouble and went, “Dammit, if only I had a 62-foot Jesus statue… that would fix everything?”

Maybe it might be helpful if you were trying to scare the shit out of some drunk friends, but I’d have to think the $700,000 (it’s insured for) might be better used to do something a little more constructive.

Like burn down the rest of that fucking nest of parasites.  I think Jesus delivered a message of his own last night. 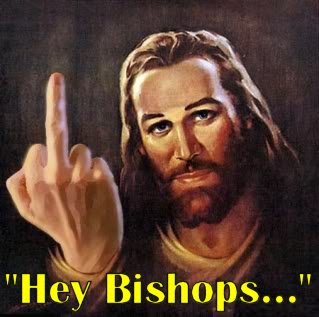 Coda
When I got home, I found that I wasn’t the only one that found this story.  I had 9 different emails, all directing me to this story on a variety of outlets.  They included my buddies Rik and John, with whom I first saw the statue, my brother-in-law Scotty who lives nearby, my sitcom friend Sitcom Kelly, and bloggers Katie from Unapologetically Mundane, Carpetbagger (who claims I have powers, and may be right), Gina from My Very Last Nerve, Jayme from Random Blogette, and regular commenter DG.

Thank you all for thinking of me.  I guess when one thinks if giant, ugly, scary statues, one naturally thinks of me!    Special thanks to Sitcom Kelly, allowing me to steal her comment for use as the title but not without credit.  Pictures are from the Cincinnati Enquirer.  Well, except  the Jesus Finger… I don’t remember where that’s from.
Posted by bluzdude at 7:56 PM