First, let me apologize for the long layoff.  Because I had two posts just days apart, I was going to let the second one count as last Monday’s post, and come back with new material last night.  The flaw in the plan (when I formulated it) was that I forgot I was having an old friend for dinner. 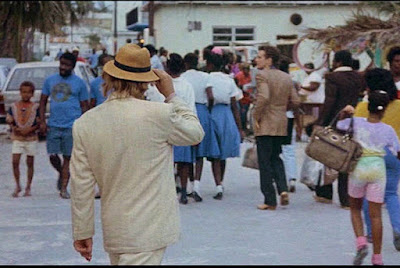 Whoops, maybe I should say “an old friend was passing through town and we were meeting for dinner.” Glad I cleared that up.

I had planned to unload the mélange of political stew that had been simmering in my brain for the last week and a half, but then the dinner changed my mind.  (And there’s always next week.  Trump will still be President-Elect and there will still be unease and discomfort throughout the land.)

I hadn’t seen my friend “Clark” since late in the summer of 1979.  He went away to college and never came back.  Five years later, I also hit the road to seek my destiny (working in record stores for shitty pay).  We never crossed paths again.

I know I’ve mentioned my small group of close friends here many times here over the years, and our little band of neighborhood misfits who hung out in our barn, but Clark was never part of that crowd.  He was a guy in my class who was always friendly enough, but we didn’t really mix with the same people.

But late in our senior year, he was dating a friend of mine, who was a close friend of the girl I took to prom.  We all went out on a double date to a fancy restaurant shortly after, to celebrate our mutual friend’s birthday and seemed to hit it off nicely.  (I mean he and I… the girls kind of drifted away from the group.)

Director’s DVD Commentary: I’m calling him “Clark,” not as a tribute to the Grizwald family patriarch, but because when my mom wanted to know who I was going to hang out with, I showed her his yearbook picture and she said, “That’s not (his name), that’s Clark Kent.”

Anyway, I realized he was a quality dude and a genuinely good guy, so we hung out a couple more times during the summer before he left for college Down South.

One night, we went out to see the original “Alien” movie and got hammered up in the second row.  All I could remember about the movie were a couple of brief impressions: “Wow, that spaceship landing is pretty wild,” and “Hmm. This is probably really scary.”  (When I finally saw the movie on VHS, it was literally like seeing it for the first time.)

Another time I had mentioned something about having a harmonica, and he had me come over to his house to play some music.  He spent 20 minutes looking for some piano sheet music in the key my harmonica was in, but I was like, “Dude, it really won’t matter; I can’t play this thing for shit.”  I think I fumbled through one song before we decided to find something else to do.

We hadn’t really gotten The Barn up and running as a miscreant HQ yet, or else I’d have had him come out.  So like I said, once he left town, our paths diverged.

But now there’s Facebook, so we friended up several years ago.  And then a couple weeks back, he said he’d be traveling from North Carolina up to visit his daughter in Massachusetts, and what do you know, Baltimore is right on the way, about halfway there.  It would be a convenient pit stop and a chance to catch up.

So we met last night at my regular sports bar to just sit, have a few beers, some hamburgers and catch up.  (Not ketchup; not for me, anyway.)

Now tell me, have you ever tried to catch up on 37 years?  It’s not easy.  I mean, how do you summarize that much time, without putting on a 3-hour One Man Show?  If you’ve been with me for very long, you know the circuitous path I’ve taken to get where I am now.

(Luckily, he’s read this blog before so there were some adventures he’d already heard about.)

And it was in telling The Big Story all at once that I realized how weird some of it sounds to me now.  It’s like someone else did all that stuff in another lifetime.

And the thing was, he had so many of the same experiences I did, with college, jobs, relocations, and relationships.  Of course, my realm was merely national; I rarely left the Midwest, Northeast or Mid-Atlantic.  Clark’s path took him all over the globe.  The man lived in Poland, Indonesia, Switzerland, and a number of other places.

It was funny; every time I thought I had a really good Facebook post from an Orioles game in Camden Yards, I’d see one of his posts while he was hiking through the freakin’ Swiss Alps.

But wherever we were, we still had the same kind of shit happen to us.  We both majored in disciplines that probably weren’t the most helpful to us.  We both ended up in jobs far from our majors, and kind of Forrest Gumped ourselves through our professional careers. Both of us had the same or similar problems with wives and girlfriends.  Both of us have had generally lousy luck with online dating.  We’ve both been impacted and influenced by lost friends.  We both played sandlot football against the same group of jagoffs and came to the same conclusions (that they were jagoffs).  (Come to think of it, I really need to tell that story here.  I’ll put it on the list.)  Both of us have considered running for elected office but figured we could just stay home and bash our heads against the wall, and save time.

It was kind of cool, though, looking back on our shared high school experience.  Out of the blue, he brought up an old mutual friend, about whom I once wrote extensively; the auburn-haired beauty from my post about redheads I've known.  They were pretty good friends back then and in fact, she lives near him right now, back in North Carolina.

When I mentioned my first college girlfriend, who also went to high school with the both of us, he was like, “Man, she was smokin’ hot!”

It was funny because he saw the potential long before I did.  I didn’t see it until college when she changed her hair.  To me, she went from kind of mousey to “Ka-Boom!”

It’s interesting to kind of “deconstruct” your high school experience with someone who was there, but not necessarily in your closest circle.  You can get a whole different take on things.

Anyway, we spent more than five hours at the bar, just talking and drinking beer.  And whoever wasn’t telling a story got to eat his dinner.

It’s a good thing we quit when we did.  I’d cut myself off on beer and my throat was starting to get sore from all the yapping.  So we called it a night… I had to go to work in the morning and he had the rest of his drive. 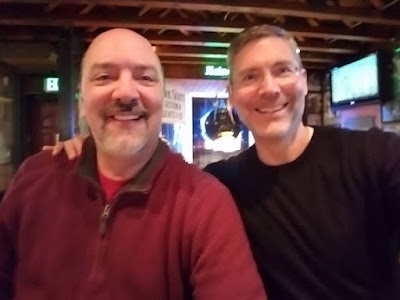 See?  With thicker frames, he really would look like Clark Kent.  Whereas I look like Donkey from Shrek.  Stupid selfies...

So… Fun night.  Thank you, “Clark” for coming up with the great idea to stop by.

They really ought to market Baltimore this way… as a rest stop on the east coast highways.  “Charm City: A great town to stop temporarily before passing through.”

It was a hell of a night. We have had oddly parallel lives, and it was fun to compare our wandering paths.

We did touch on a favorite point of mine. When looking lack, we remember good people and shared experiences - not such the material possessions, that anyway the ex-wives tend to cart off... So let's not wait another 37 years to share some beers and laughs!

Glad you reconnected in person.

Delightful. The Barn would have welcomed and adopted Clark.
"Those were the DAYS, my Friend..." I'm glad they didn't end.

I like running across old friends and acquaintances. It really does seem like you're describing someone else's life when recalling some things from the past. I really did THAT? Charm City is a great idea. Run that by the Chamber of Commerce.