I know I haven’t written much of anything about our new… gulp... President, which is weird because there is so much going on.

But it’s one of those things that’s so bizarre; you don’t even know where to start.  Plus, EVERYONE has been writing and broadcasting about it.  It’s hard to find something new.  I doubt I’ll succeed here myself.

The main thing I learned during this presidential campaign is that people are immune to facts they don’t want to believe.  They vote with their emotions and there is no way to use facts to bludgeon your way through an emotionally made up mind.  (Or corrections, analogies or any other logical instrument.)

That’s a tough pill to swallow because that’s the only weapon I care to wield.  I need things to make sense, I seek to disparage hypocrisy, I call a spade a spade and a lie a lie.

But right now, up is down, down is up, the sky is green and the Commies are our friends.  All it took was someone in power to use that old saw, “Who are you going to believe, me or your lyin’ eyes?” 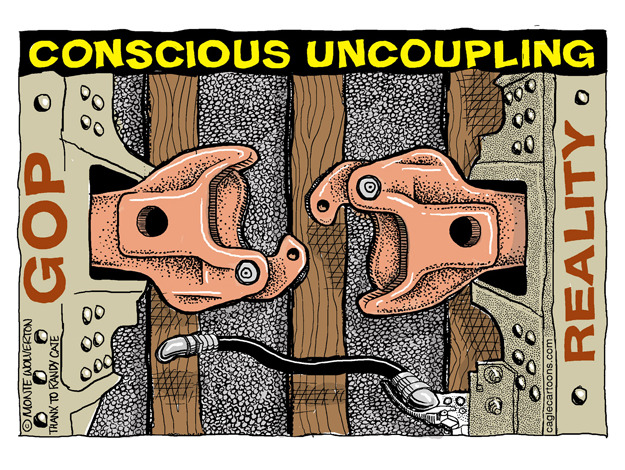 I think I was the rightest I’ve been in a long time, back in November when I said we shouldn’t worry about Trump being a racist Nazi, we should worry about him being a typical pro-business Republican.

And what was the first thing he did?  He packed his cabinet nominations with other filthy-rich billionaires and military generals.  He picked people to run departments that they’d spent the latter parts of their lives trying to undermine or eliminate. I mean, look at some of these guys:

·        Jeff Sessions, nominee for attorney general, enemy of civil rights and women's rights. He was considered too racist to confirm as a federal judge by fellow Republicans in 1986. He’d be responsible for enforcing the country’s civil rights laws.

·        Steve Mnuchin, the nominee for treasury secretary, former Goldman Sachs executive who got rich at the expense of working Americans. He ran a bank called a "foreclosure machine" that kicked people out of their houses, using techniques so coldblooded a federal judge called them “harsh, repugnant, shocking and repulsive.”  Not to mention, his name looks like a typo.

·        Scott Pruitt, nominee for Environmental Protection Agency administrator, climate science denier. As Oklahoma Attorney General, he has repeatedly sued the EPA to attack the Clean Power Plan and Clean Water Rule, even took credit for a letter criticizing the EPA, which was actually written and delivered to him by a big oil company’s top lobbyist.  The EPA would become functionally irrelevant under his watch, which is exactly how he wants it.  Clean air and water would become collateral damage in pursuit of the fossil fuel industry’s profits.

And now that the new Congress is convened, what was their first order of business?  To neuter the independent Ethics Committee.  And just because they backed off shouldn’t keep us from questioning why they thought it was a good idea in the first place.  In what possible way would killing the Ethics Committee serve the American People?  There is none.  People eliminate oversight when they don’t want anyone to know what they’re up to.

Same reason they passed a bill to ban legislators from filming themselves on the Senate floor.  They want to make sure the only things coming out of the chamber is those which serve the Republican Party.

Last I heard, Congress was going to repeal Obamacare but not have it go into effect until after the next election, to insulate themselves from the fallout.  So I have to ask; if the backlash is going to be that powerful that they fear for their re-election, isn’t that a strong message to heed the will of the people and leave the ACA alone?  Whose interests are they serving here?  Who benefits when this insurance disappears from the grasp of people who need it?

And they still have no idea how to replace it.  Sure, they like all the fun parts, like no pre-existing conditions and keeping the kids on a family plan until they’re 26.  But that only works if healthy people also have the insurance, hence the dreaded purchase mandate.  The Republicans are like a pushover daddy who tells the kids they don’t have to eat a well-balanced meal, they can just have candy for dinner.

Then there’s the whole Russian election influencing issue.  First, they claim the Russians did nothing because Putin said so and the entire intelligence apparatus of the United States is wrong about it.  Now they’ve moved onto “Well, maybe they did, but it didn’t have any effect.”

Seriously?  The Russians did exactly what the GOP has been doing for the last eight years.  They created a scandal through a constant drip-drip-drip of email leaks and manufactured fake news stories that made Hillary look like a crooked scandal monkey.

If Republicans didn’t think it would have an effect, why the 11 Benghazi investigations?  Why the cottage industry of fake news stories to push on social media?  They know that keeping “Hillary” and “scandal” in the same sentence for years would take a toll on the public’s psyche.  People who only half pay attention to the news, (and they are legion); that’s all they know.  That’s why Hillary got stuck with the “crooked” label, while Trump, who is actually documented as having done these various atrocities, got away clean.

Did you see where they officially wrapped up the last Benghazi investigation? Why do you think it’s ending now?  Because maybe Hillary Clinton is no longer a political threat, so now they can put the charade to bed?  Bet the house on it.  Funny how there are still no charges.

There is no mountain of hypocrisy too high for these jaggoffs to climb.  Did you see Mitch McConnell’s statement about how the American People don’t want to see any nominations stalled?  Seriously?

After the 10-month shit show of stalling Obama’s Supreme Court nominee, he’s going to decry the Democrats doing the same thing?  Of course he is. 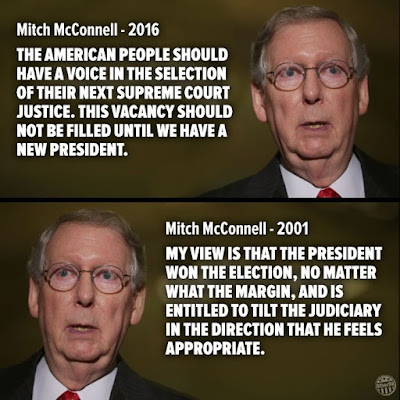 And what’s this talk about a mandate?  For chrissakes, when Obama won two elections by more than five million votes, they said it wasn’t a mandate.  But their guy losing the popular vote by almost three million votes IS?  Please…

I’m not a big backer of “tit-for-tat,” but I’m tired of the Democrats being played for saps, just because they try to do the responsible thing.  And I’m tired of rewarding the Republicans for engaging in filthy, dirty pool, like indefinite nomination stalling, aggressive gerrymandering, voter suppression and zillions in anonymous dark money.

So I say congressional Democrats should do every single thing the Republicans did.  Granted, with minorities in both houses, their power will be limited.  But they should do whatever they can to let the GOP face their own tactics.  Trust me, if Democrats play the “greater good” scenario, Republicans will just consolidate their power and laugh all the way to re-election.

Protests and petitions mean nothing at this point. Preparing for the mid-term election in 2018 is all that matters.

Yep, the only difference is the quality of the sack.

Suit or sack,Who will shout the emperor has no clothes???

I assume everyone, because no one wants to see THAT!