How Does This Serve the American People? (Updated)

OK, enough with the happiness that has descended over my life and continues unabated.  Let’s get back to how this country is swirling right down the tubes.

We know Donald Trump campaigned aggressively about “draining the swamp” and reining in Wall Street influence over the financial policy.  And now we know how hollow those promises were, as he promptly installed a series of billionaire bankers and Goldman Sachs executives into cabinet and senior advisory positions.

Now he just signed an executive order to look into unraveling the Dodd-Frank banking regulations law, which was passed in the wake of the Bush financial crisis and recession, to ensure that bankers can no longer place high-stakes bets with taxpayer money to bail them out.

Such a law seems like a no-brainer, right?  Protect The People from reckless banking schemes?  You have to ask, “Who does it serve to strip Dodd-Frank of its bite?”

Well, it serves the bankers, who would love nothing more than to go back to the way things used to be, when they could do as they pleased, with no oversight or social conscience.

Trump stated, “We expect to be cutting a lot out of Dodd-Frank because, frankly, I have so many people, friends of mine, who have nice businesses who can’t borrow money. They just can’t get any money because the banks just won’t let them borrow because of the rules and regulations in Dodd-Frank”

Seemingly within minutes, former congressman Barney Frank called him out as a liar.  The congressman, who is the “Frank” in “Dodd-Frank” co-authored the bill and said that there is nothing contained in the bill that applies to preventing companies from obtaining loans.  He said, “There are no restrictions on lending in this bill. There are restrictions on the manipulation of derivatives of complex financial instruments like the ones AIG used that got people into serious trouble.”

This seems to be the theme of Trump’s first weeks in office.  Who, exactly, benefits from these executive orders?  Doesn’t seem to be us… 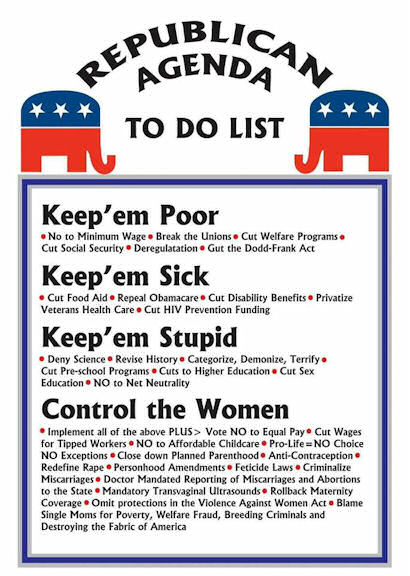 The House Republicans also wrote plans to eliminate the rules designed to keep guns from people with severe mental disabilities.  Jesus, isn’t that exactly who we don’t want running around with guns?  Same with known terrorists… no wait… they already killed plans to check the Terror Watch List before allowing a gun sale, during the last term.

Someone explain to me how the public is served by allowing terrorists and people with severe mental health problems to own the lethal firepower of their choosing because I’m at a loss.

Whenever there’s yet another mass shooting, everyone says, “We have to do a better job at treating those with mental problems.”  Can’t we do that first, before we suit them up with a semi-automatic rifle?  (Of course, that’s only if the shooter is a white guy.  If it’s a brown person, the only answer is to close the borders.)

Congressional Republicans drew up and passed a bill to kill anti-bribery and environmental regulations.  How, exactly, does the American public benefit from making it easier to bribe energy company officials?

And speaking of the energy business, last week the House GOP voted to eliminate regulation that prevents mining companies from dumping coal mine waste into nearby streams.  Who exactly thinks that streams are a good place for mining waste?  Besides coal mine operators?  This is another example of Republicans being indifferent to even the most basic environmental concerns if there’s money to be made. 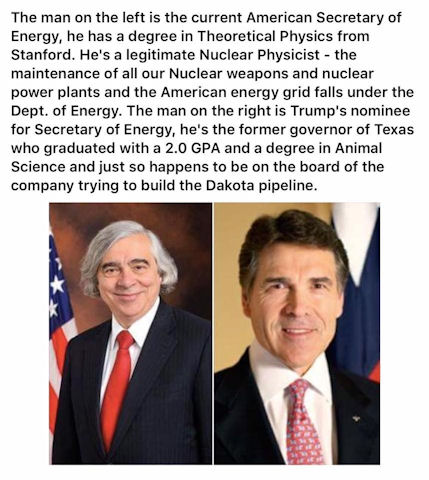 It’s not like we’re talking about killing construction projects because they threaten some fish that no one’s ever heard of.  It’s dumping toxic chemical and mineral waste into running streams.  You do know that water ends up somewhere, right?  How does the American public benefit from poisoning our waterways?

They don’t, obviously.  Only coal companies do… companies who give big to Republican politicians, who they count on to remove any disincentive to mining in the least expensive way possible.  (“Screw the worker safety precautions!  We’ll just get more miners!”)

Was this really what Trump’s voters wanted?  I mean the “rank and file” voters, not the big business voters who supplied all the ad money.  Obviously, it’s exactly what THEY wanted.

He didn’t run on propping up big business, he ran on a populist agenda to help the average American.  Granted, “average Americans” who believed him are guilty of wearing the rosiest of rose-colored glasses.

At no time was Trump ever interested in doing anything for people who aren’t filthy rich.  He just played to everyone’s prejudices and fears in order to get their vote and then turned on a dime once elected. This will be an ongoing point I’ll be making for the next four years: how are the president’s actions benefitting the American people?

I’m pretty sure you’ll see that any correlation between a new Republican-sponsored law or executive action, and a benefit to the average American, will be coincidental at best.  But each and every one will benefit the rich and powerful.

Other than the anti-gay/religious freedom stuff.  That’s earmarked as bones to be thrown to the Pence/Evangelical voters who got Trump the presidency.  Trump gives less than a fuck about gay rights or religious freedom, but Pence does.  Trump will go along with it because it doesn’t really cost the rich anything, plus it keeps the rest of us distracted from his real plans.

Late Update
I saw in Tuesday's newspaper that Trump signed another executive order which delayed the implemenation of an Obama rule that would change how brokers advise their clients.  From the Baltimore Sun:

"Under the rule, proposed by the Obama administration last February, brokers who sell mutual funds, stocks, bonds, annuities and other products must meet strict standards requiring them to put their clients' best interest above all else when giving investment advice."

I ask you, in what way are the American people served by eliminating a rule that makes brokers serve their clients' best interest??  I mean, it's amazing that such a rule is even necessary.  But Republicans want it gone and the only conclusion one can draw is that they are eager to let brokers continue to use their clients as suckers upon whom they can sell whatever goods will bring back the biggest bonus.

Republicans are not on our side; they care only for their rich benefactors and this executive action shows that clearly.

But everyone was worried about Hillary's ties to Wall Street, right?

Nice analysis there, America.  You deserve every screwing this administration heaps upon you.
Posted by bluzdude at 6:27 PM

aaaaaaaaaand this is why I am seriously considering shredding the American passport and moving to Ireland.

And totally not for the ale or anything, right?