It’s been a great week in political What the Fuck!
First, I saw a CNN Poll that said that 41% of Republicans believe that Obama was definitely or probably born in another country.
Sigh.  We’re still there?  I guess it just goes back to that “Opposing fact only hardens beliefs” post I did a couple weeks back.  How is the country supposed to get on with business if almost half the people believe an out and out, provable falsehood?
What the hell are they looking for?  I’ve seen the birth announcement in the local Hawaiian newspaper.  The State of Hawaii has released the common birth document that is made public for all such inquiries.  Hawaii is actually one of our states!  It says so right on the 2009 quarter.
These idiots won’t be satisfied with anything short of a personal declaration from the Lord Jesus himself.  But of course, He was a “foreigner” too, so I imagine no one will listen to Him either.  And if he comes here via Arizona, he’ll probably just get picked up and thrown in jail.  I wonder if they have any Aramaic translators in Arizona?
Ground Zero for Common Decency
Cassie from Sisters from Different Misters sent me a video clip from The Daily Show where Jon Stewart takes the House of Representatives to task for voting down a bill providing health car for sickened 9/11 First Responders.
Think about that.  Is there any possible reason that our country not be treating these heroes with anything they may need, after what they’ve done?
Apparently, there is, and they are the usual suspects:  money and politics.
You know how the Republicans have been shit-canning everything the Dems try to do, on the basis that it adds to the deficit?  Well, this bill is paid for.  So what’s the objection now?  They claim it raises taxes.
That would also make sense, if you were a Republican, except that as usual with them, it’s not true.  What the bill does is close a loophole that allows corporations doing business in America to avoid paying US taxes by maintaining offshore shell offices.
So in short, the Republicans booted this bill to protect their corporate benefactors, at the expense of the people that risked their lives and livelihoods by rushing to dig out a smoking pile of rubble and got seriously sick from it.
Nice.  This is the party that loves America, family values, the Lord, the flag and apple fucking pie (if you pay attention to their PR), and they’re basically waving their private parts at the firemen, policemen and construction workers that they use feature so prominently in their advertising, in the name of protecting the profits of the giant companies that make money here, hand over fist, but duck paying their taxes.
Even more disappointing to me is that the Democrats allowed it to happen, by using a parliamentary maneuver that made it require a 2/3 majority to pass the bill.  In return, they removed the option for the Republicans to add amendments that would be embarrassing to them.  This is where the “politics” comes in.
When the hell are they going to stand up and proclaim, “We’re not taking this shit anymore!  You fuck with this bill and we’re going to run the clip of you voting ‘no’ or attaching superfluous amendments every hour on the hour, come November.”
Watch the Jon Stewart clip… it’s classic.  He builds the case like a freakin’ District Attorney.  And if it doesn’t piss you right the hell off, you may be seriously lacking a soul.
And why, may I ask, has it been left up to the goddamned comedians to bring this stuff to light?  I never saw a single story on this in the paper, online, or on the news.  Something tells me that the politicians on both sides want this story to be buried even deeper than their integrity is. 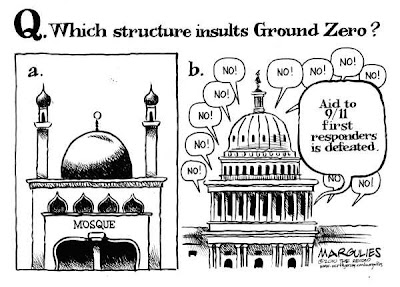 Propping Up the Indefensible
At least the week wasn’t without some good news.  A federal judge overturned the noxious Proposition 8 referendum in California, which barred gay marriage.
I love the fact that the judge did it with hard, cold facts and reason, boiling down the Prop 8 supporters’ argument to “it’s icky and my religion says it’s wrong,” which fortunately for the rest of us, is not the basis for the law of this land.
I spelled out my position on this issue last November, back when the citizens of Maine enacted a similar referendum, in that case, overturning a new law.  If you’re new here, you should click the link and check it out.  But suffice to say; I think gay people have every right to marry and be just as miserable as the rest of us.  Nothing they do in their bedroom or in front of a judge is going to diminish anyone else’s marriage or life.  People should stop worrying about what others are doing with their lives and maybe work on their own lots in life.  Maybe then they can do something about that 50% divorce rate.
When in doubt, mind your own fucking business.  That’s Bluz 3:17.
Type Cast
To end on a lighter note, near the end of the day, yesterday, my cube neighbor at work was telling one of my bosses about how I make her feel inferior, because all she can hear from me is the sound of my very rapid typing.
Later I told her not to feel so bad… what she doesn’t know is that half the clicks come from my feverish working of the backspace button.
Posted by bluzdude at 1:30 PM