As you may recall, I’ve been going to an awful lot of ballgames in the last couple of years.  Last year alone, I went to 26 Orioles games, which was a new personal record for one season.

I go to so many games for a number of reasons… It’s fun, I’m a sports fan, it’s affordable (for a big-league sports event), the facility is nice, it’s convenient, it gets me out of the house, but most of all, I haven’t had anything better to do.

But now, since I met Sweetpea, I do have other things to do, for a change.  But that doesn’t mean I’m giving up the ballgames.  She likes going to games so I can take her with me.  Not to 26 of them, mind you, but a fair number.  And I’ll also have Sitcom Kelly to keep me company on days Sweetpea doesn’t care to go.

Until school lets out in mid-June, it requires special planning to account for her dog, if she’s going to be away for that long.  And to help matters, I conceded that we can get there only one hour before game-time, as opposed to the two hours early that I usually allow.  (If she sat and drank beer at The Bullpen for as long as I usually do, she’d be comatose by the first pitch.)

So it was a beautiful sunny Saturday, last weekend, when we took our first trip to Camden Yards together.  It was a 4:05 game so we planned to arrive between 2:30 and 3:00.  I was eager to share my traditional game-day experiences with her, especially introducing her to my usual bartender and friends down at The Bullpen.

But first, we had our subway ride into town.  I had my monthly pass, of course, so we got her a $4 “day-pass.”  After we got off the train, I had her give hers to me for safe keeping, because chivalry is totally not dead yet.  Plus I didn’t want it getting lost.  I have a little plastic sleeve that I keep mine in, so hers went in there too.

Because the hated Yankees were in town, the place was lousy with New Yorkers and the outside bar areas were mobbed.  There were no seats at the bar at The Bullpen, but we found a place to stand, which was good enough for the moment.  We could nurse a couple of beers and stake out the people who looked like they were getting ready to leave.  (This is why I usually get there so early… there are much better odds of getting a seat at the bar.)

I was bummed because A) I’d left my Bullpen VIP card at home, and B) none of the regular bartenders, nor the bar manager were there.  That meant nobody knew me, so I had to drink regular-priced beer, just like a non-VIP schmo.

A couple of young girls jammed themselves right in front of us, and within minutes, they swooped in and sat in the seats left behind by the couple whose stools we were staking out.  Little shits!  Duly insulted, we left, which was fine because it gave us time to wander around the ballpark.  Sweetpea had been there before, but not often.  And lord knows I’m a veritable fountain of information, now that I’ve taken the Camden Yards tour.

Our tickets were in the left field club section, a place from which I’ve seen quite a lot of games.  I like it because it’s more secluded, has all the club level amenities, yet doesn’t cost any more than the lower left field box seats. 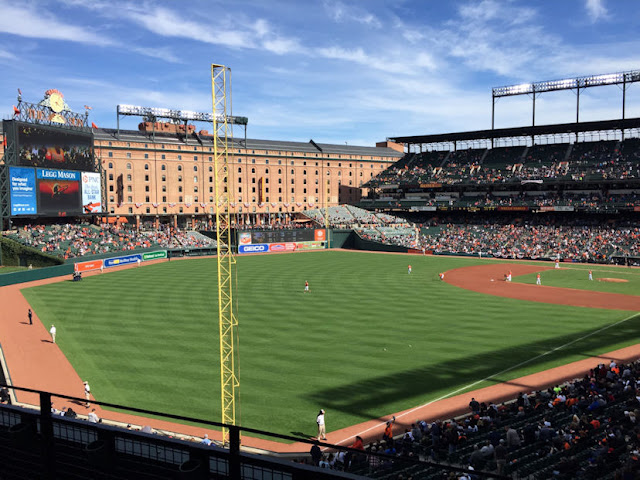 Nevertheless, our section was still defiled by a handful of Yankees fans, who’d made the trip down from NYC.  At least they were entertaining…

Walking around the club level, I had the chance to tell my fabled story of the time I wasn’t sufficiently careful in choosing the restroom I walked into.

Anyway, we saw a good game and enjoyed the afternoon, although if I were dying, this would have been the perfect game to attend because it seemed to go on F O R E V E R!  We were three hours in and had only seen six innings.  We took that as our cue to leave.  It was still a close game, with the Orioles down by one, but I figured we’d be home in time to catch the end on TV.

We heard a huge roar shortly after we left the park, so I figured the O’s had tied it up.  I figured I could check it out once we got on the train and it eventually came up from underground (about halfway home).  Again, I took Sweetpea’s subway pass after she used it, and put it in the holder with mine so I could make sure it didn’t get lost.

Then it took about 25 minutes for a train to show up.  Pissed me off because they’re supposed to run every 10-11 minutes on the weekends.  That’s another thing to do when you’re dying… go sit in a subway station and wait for late trains.

So eventually, a train came and whisked us toward our destination.  And when I checked the box score on my phone, I saw that not only had the Orioles taken the lead right there in the 7th, but they were just closing out the win in the bottom of the 9th.  So NOW they start burning through the innings?  Gah!

The train pulled into our station and we hopped out.  As the train pulled away and we went down the escalator I reached into my pocket to give her the subway pass (which is required to enter AND exit) and guess what wasn’t there.

Fuck.  Me.  The passes were in the same pocket as my phone and when I reached in to pull out my phone, the passes must have slipped out too, and fallen on the seat or floor.  So much for my Knight in Shining Armor routine, steadfastly guarding milady’s day pass…

But worse, my monthly pass was gone and I still have three more weeks of subway rides on it.  Fuuuuck!  Granted, it could have been worse… I’ve been working from home two days a week lately, so that’s an expense of $24 averted.  But still, I’ll have to spend $36 in subway fare this month, that I’ve already bought.

I hope it was found by someone who needed it, anyway.

So the first game with my baby didn’t quite work out as I’d hoped, but I can’t complain.  It was only our opening day and I got to spend a nice afternoon with a pretty girl, watching a baseball game.  We’ll have a lot of other opportunities to work out the kinks.  And I’m pretty sure she’ll be carrying her own subway pass from now on.

In fact, she should carry mine too.

Email ThisBlogThis!Share to TwitterShare to FacebookShare to Pinterest
Labels: Baltimore Orioles, Bluz LIfe, Stories and Misadventures, Things That Piss Me Off