I have to admit, I almost lost it when I saw this in the Baltimore Sun this weekend: 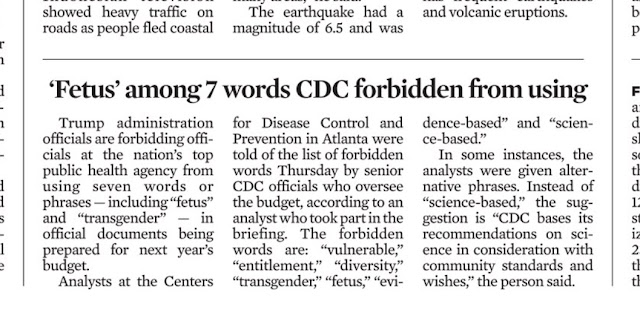 This is the sign that we’ve now arrived at Big Brother and 1984.

Changing language as a way to control people’s hearts and minds; it’s straight out of Orwell.

Mind you, these words aren’t banned from some parochial school library; they’re banned from use at the CDC (The Center for Disease Control), a pinnacle of American scientific achievement.

Aside from wanting to pretend some of these terms don’t exist and wanting to kibosh a couple others, the ones that really rankles are the last two. The preferred language now goes like this:

“The CDC bases its recommendations on science in consideration with community standards and wishes.”

In other words, it’s the opposite of science. What it says is that our leading public health institution will bend to the will of any backwoods outpost full of misinformed soccer moms and religious zealots who think vaccinations cause autism or IUDs cause abortions.

Science comes from testing and evidence and is independent on the popular opinion of the non-expert general public.

This is your science-denying GOP at work. Ain’t America great? Here’s to hoping these clowns come down with some raging new strain of syphilis.

Let the CDC tell them, “Sorry, guys, Mayor Gladys thinks anyone with a venereal disease deserves to have their willy fall off.”

Taxing Situation
Meanwhile, the cancerous tumor masquerading as the current tax bill oozes closer to passage… as if there was ever a doubt. Even the senators who seemed to know what empathy was, back when they were trying to gut the ACA, have shrunk from the pressure of Republican “leadership.” For a Republican to vote against this bill would be political suicide. No more chairmanships, no more legislation passed, no more reelection money, and a whole lot of attack ads from their own party.

Even the ones who are retiring won’t vote against it. McCain may miss the vote, but he said he’d be back to vote for it if they needed him.

And remember, this is only Step One. Next session, these same legislators will start looking to reduce Medicare, Medicaid and Social Security (AKA “entitlements), to appease the deficit hawks and make up for the 1.5 trillion-dollar loss this tax bill will entail.

But they didn’t do that, did they? Their goal was to siphon money to the very richest among us, plain and simple. The rest of us? We get just enough to provide rhetorical cover for them to hide behind.

Likewise, don’t believe Sen. John Cornyn when he says that they “probably could have made it (the tax bill) better if they had participated (in its writing).

Who does he think he’s kidding? This bill was written in secret by lobbyists and Republican staffers. What possible Democratic ideal would they be amenable to including?

There is none. And it’s equally unrealistic to think that their philosophical opponents are going to do a 180 on their traditional views and add to a bill that siphons money from their voter base with a fire hose.

There’s a reason it’s over 1000 pages long. This tax bill is a wish list for every rich Republican business owner and/or ideologue.

Net Losses
Net Neutrality was in the news this week too, as the FCC took the first steps to kill it, as a big, wet, sloppy kiss to the internet and cable industries. This step was taken even after numerous surveys said that 85% of Americans are against the repeal.

Shows you what the Republicans think of us, doesn’t it? But still, they try to con us, claiming they’re “freeing the internet” for more innovation.

Right. The only innovations coming are ways for Verizon and Comcast to transfer money from our pockets to theirs.

At least, to the best of my knowledge, Congress still has to sign off on the repeal. It is possible that enough legislators could be pressured into bucking the party line. And even if they don’t, Congressional action will be needed to create a standard that doesn’t get reversed with every change in administration. There’s still time to make our voices heard.

Not saying they’ll listen though. More likely, they’ll just claim that the dissenting voices are just robo-comments, unleashed by their enemies. Which non-coincidentally, is how they ended up with over 2 million pro-net neutrality comments on the FCC website.

Once again, the Republicans make a big show out of accusing Democrats of things they’ve already done.

Debunkery
Have you seen this smarmy meme on Facebook lately? 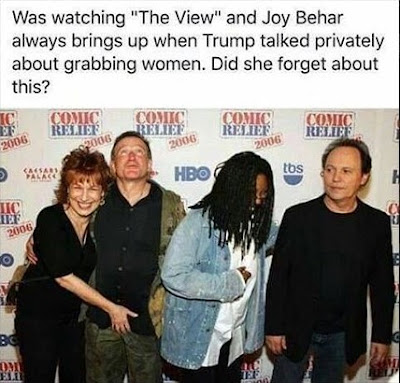 This is the logical fallacy of false equivocation. The creator is implying that powerful men pursuing, touching and harassing women around the workplace carries the same weight as a female comedian grabbing the old “bowl of fruit” belonging to another comedian friend while clowning around for publicity pictures.

It’s not even close.

First of all, look at Robin Williams. Does he look harassed? Nah, he’s having a ball. And who’s to say he hadn’t grabbed her first, or even set it up? All we have here is one still picture, which probably doesn’t tell the whole story.

Second, Robin Williams is the king of that group. He’s the comedian with the highest power level… the biggest star by far. The less powerful do not persecute the more powerful; that’s not how it works. If Robin Williams wanted, he could have made it an issue at the time and killed her career (which obviously hasn’t suffered a smidge.)

According to Snopes.com, Behar even brought this picture up while interviewing Robin Williams. She said, “I forgot that I did that, I molested you at Comic Relief.”

Also, Trump “Privately talked about grabbing women?” He said it to a freaking film crew with the camera running. How the fuck is that private?

So no, there’s no validity to Joy Behar “forgetting” this incident, because it wasn’t really an incident. Nice try though. I’m sure it fooled a bunch of conservative apologists who desperately want to slap that noisy liberal woman down.

It’s Mueller Time
The Republicans seem to be working to provide cover for an eventual firing of Special Prosecutor Robert Mueller, by claiming the investigation is biased. For proof, they cite instances where two investigators had negative things to say about Trump… you know, just like the majority of all Americans, if you believe the polls. Mueller removed these two agents from the case once the messages became public.

If you think about it, the GOP seems to be saying, if you’re not on our side, you’re biased. Right? I mean, is there some kind of test to be applied here?

I say, if you’re running an investigation, you WANT agents with a hard-on for the suspected perp. It still comes down to what you can prove and the evidence is the evidence no matter who digs it up. 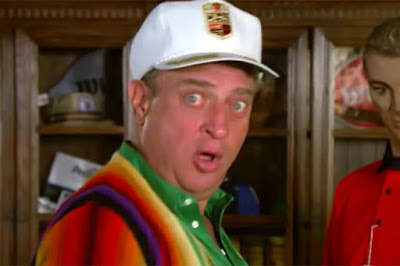 As far as I’m concerned, they get no respect either.

And when it comes to their charges about how the FBI investigated Hillary, I’d like to remind them that there were 11 Republican-led congressional investigations, all of which found two things: Jack and Shit.

Were they all biased for Hillary too?

Or maybe all those investigations were just a prolonged smear attempt, so they don't really count.
Posted by bluzdude at 7:15 PM

These people are totally nuts and need to be stopped. I'm not sure if the voters can wait until November. I am actually surprised that there have been no attempts to physically remove these "men" from office.

It can happen but we'll have to be patient and have long memories. Even if a miracle happens and we take back the House and Senate, 45 will still have veto power and can stop any undoing of his legislation. (With the limited amount of Republican Senators defending their seats next year, I don't think it's possible to sweep in a veto-proof majority.)

But at least we can stop further damage, in the hopes that someone worthy will assume the mantle for the Dems in 2020.