Last week I wrote about the “Nunes Memo,” where the staff of Congressman Nunes went through the FBI surveillance requests on some Trump campaign staff and picked out all the parts they could spin into nefarious intentions, and wrote up a memo about them. President 45 decided to release it, over the national security objections of the whole of the federal law enforcement community.

Now the Democrats have created their own memo that provides information that was omitted from the Nunes memo, that counters the assertions contained therein.

And to the surprise of exactly no one, Trump decided not to authorize the release of that memo, due to national security concerns.

Hmmmm. I bet you that each of those national security concerns coincides with points that debunk charges from the Nunes memo. To release a redacted memo may basically neuter the entire response.  Which is exactly what the Republicans intend. Remember, Trump thinks the Nunes memo exonerates him. We’ll see how much valuable deflection is left after these redactions. I’m not optimistic.

You have to take that with a grain of salt. He thinks that the sun coming up in the east exonerates him. You can’t take that stuff at face value. It’s just one more example of yelling a lie over and over until it becomes accepted as the truth. The Republicans are masters at it, Trump in particular.

Speaking of repeated lies, let’s look at some more bogus Republican memes captured from the wild. 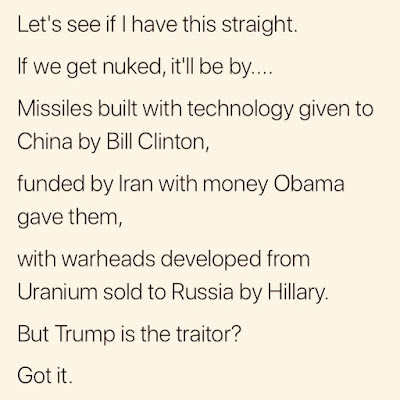 Right off the bat… regardless how who nukes us, these SOBs know who to blame. Of course, that’s a given. When has a modern Republican taken the blame for anything? Just look how Sean Hannity is furiously tap-dancing to credit Trump with the flush stock market and Obama for the recent downturn. They’re shameless.

“Missiles built with technology given to China by Bill Clinton…

China has had nuclear tech since the 60s. They could have blown us up any time they wanted ever since.

“Funded by Iran with money Obama gave them…

So is it the Chinese engineering our demise or is it Iran? Doesn’t matter when you’re smearing with a broad brush. And not to pick nits, we didn’t give Iran any money; we unfroze their assets, giving them access to their own money, in return for standing down on weaponizing nuclear energy and permitting inspections, (which is the opposite of arming them).

“With warheads developed from uranium sold to Russia by Hillary.”

Complete bullshit. This has already been thoroughly debunked. Hillary did not have control of this uranium and her state department was one of nine departments that provided approval. (There are more areas of exoneration here, but I don’t want to dwell. You can click on the Snopes link above, for more details.) The uranium deal, as it applies to some nefarious plot between Russia and Hillary, is a complete fabrication. Not that you can tell by watching Fox “News” though.

“But Trump is the traitor? Got it.”

Finally, something based in fact. Trump is the only one who benefitted from Russian interference in the 2016 election. Trump is the one who defers to Russia and Putin at every turn. Trump is the one desperately scrambling to try to derail the special prosecutor’s investigation into his Russia ties. Two of his staff have already pled guilty to federal offenses as it pertains to having ties to Russia, and more are on the way. 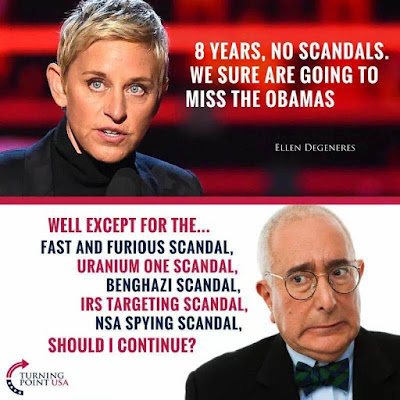 The second half of this should say, “except all the stuff we made up for political purposes.”

Fast and Furious scandal: A police op gone wrong, no doubt. It was the same tactic police forces use all over the country… follow the guns/drugs from the street level dealers up to the bigwigs and take down the whole organization.  Unfortunately, this one went balls-up when they lost track of the guns sent to the cartels.  Oops.

While a total embarrassment for law enforcement, I don’t see how it can be used to smear the presidency. Unless it’s a Democrat, because obviously, nothing that’s gone wrong in the country since January of 2017 has been Trump’s fault. Just ask him…

Uranium One Deal: See above. A complete fabrication promoted for political purposes.

Benghazi scandal: Ditto. It certainly wasn’t a high point, but not once have I ever heard a reason, convincing or otherwise, why this embassy attack was any different than the 11 fatal embassy attacks that took place during the Bush administration. Multiple congressional investigations uncovered not a single crime or anything that could even be charged. But because Hillary was seen as likely to run for president, the GOP smear campaign came out in force, with the objective of getting the word “scandal” and her name in the same sentence, over and over.

IRS Targeting scandal: More BS. IT was shown that the IRS went after liberal organizations too, for not being eligible for tax exemptions. And the ones Republicans always point to were based out of a single office in Cincinnati.

It’s kind of like those FBI texts. Just because a couple of employees might have partisan leanings doesn’t contaminate the entire organization. Nor does it qualify as a presidential scandal.

NSA Spying scandal: I’m not sure what they even mean with this one. The NSA was let loose to spy on Americans by the PATRIOT Act, in the wake of 9/11. There has been no political will on either side to put the genie back in the bottle since then.

Or they might mean the spying on Trump’s campaign people. Which is still BS. There was plenty of evidence pointing to shady behavior involving the Russians. And it turned out to be a valid concern. Look at the guilty pleas.

Also, in some instances, they weren’t surveilling Trump or his people; they were surveilling the Russians. And guess who happens to get caught on tape talking with them? Trump and his people. That’s just a case of the fly walking into the web.

Should I continue? No, you’re just embarrassing yourself.

The Obama administration was free of meaningful scandal, once you eliminate all the fake stuff, smears, political maneuvering and wishful thinking. There was no womanizing, no shady business deals, no tax evasion, no selling influence for profit, no un-presidential tweeting, no insulting or undermining our allies… The current guy steps on his own dick three times a week and twice on Sunday. There is no valid comparison.
This meme tells me the Republicans are now believing their own bullshit.
Posted by bluzdude at 6:50 PM

They have to divert attention and lie in order to blame someone else. There is no, "The Buck Stops Here" sign on Trump's desk. He is only responsible for things that have gone well.

His sign says "The Buck Stops at Obama, Except For the Good Stuff, Which Totally Stops With Me."