I know a lot of people are doing 9/11 posts this weekend.  This is mine.  So sue me for being unoriginal.  Who else posts about football mojo?

I was at work on September 11, 2001, like so many millions of others.  I was working at an office building in downtown Baltimore.  My friend Karen yelled at me to come over to her cube and then told me that a plane just hit one of the Twin Towers.

I assumed it was a small personal aircraft, like a Cessna or something.  So I was like, “Wow, that’s too bad.  I hope there’s not much serious damage.”

I went back to my cube and continued with the day’s affairs, until a few minutes later when she called me over again and said, “A second plane just hit the other tower.”

Now I knew there was something terribly awry.  The first could have been an accident; the 2nd made it a plot.  I stood in her cube and we both listened to the radio.  Eventually, the word came out that it was 2 airliners that hit The Towers, which were now on fire.

“Holy shit!  What the hell is going on here?”

More planes hijacked.  The Pentagon.  A field in Shanksville.

“Christ, how many more balls do these assholes have in the air?”

It was inconceivable that all this could be happening, on this beautiful September day.  This shit just doesn’t happen here.

When word came that the towers collapsed, that was it.  I just sat in my cube, staring at nothing.  I didn’t know anyone in New York City, let alone anyone that worked at the WTC.  But it didn’t matter.  The radio reports were horrifying.  Untold thousands of innocent people just perished in terrible ways.  They were people that, like me, were just sitting at their desks or in airplanes, carrying out their day’s affairs.

There was some concern building about our own safety.  Baltimore is within easy flying distance of all the crash sites.  Ours is an 18-story building; not the tallest around by far, but still a possible target.

I also knew my parents were away from home and would need to be traveling again soon.  I wondered if they were OK and what would happen with them.

Around 3:00, we were given the option to go home and I jumped at it.  I spent the rest of the day glued to the TV.  I don’t think I even ate dinner that night.  I just stared at the film of the destruction, pondering the lives lost and letting the tears stream down my face.

I didn’t live through the Cuban Missile Crisis.  I wasn’t born for Pearl Harbor or D-Day or Hiroshima and Nagasaki.  This was my Big One; the one I’d remember forever, which would forever divide my time on earth between Before and After.

I soon learned that my folks were fine.  During the time when all flights were grounded, Dad rented a car and drove back to Green Bay.  I think they were in Georgia, so it was quite a trek.

I still have so many of the emails from the aftermath.  Most expressed this sentiment: 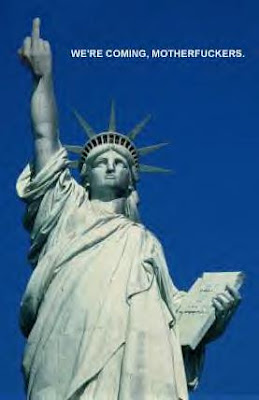 There were newspaper columns, editorial cartoons, pseudo-letters from President Bush to the Taliban or Osama bin Laden, and lots and lots of photoshops.

My favorite out of all of them was this one, which beautifully demonstrated both our communal sadness and steely resolve: 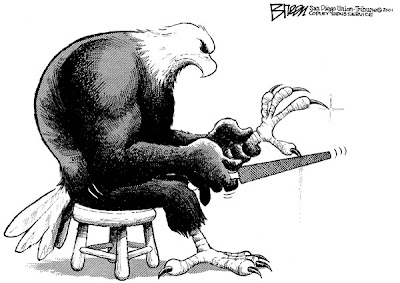 It’s unfortunate that this was the last time our country was united.  I’d say it lasted from September 12th to the day The Shrub took his eye off the ball and invaded Iraq, a country that actually had something we wanted.  It was like, “while we’re over there, we might as well pick us up some oil rights.”  Like it was just one big Middle Eastern grocery store… “While I’m here in Aisle 5, I might as well pick up some cheese doodles in Aisle 6.”

I could have written this post last year, but I didn’t.  I knew I had some additional material to use but I wasn’t prepared to extract it just yet.  That has changed.

I’ve actually been up in The Towers before.

Back when I was married (cold chill runs down back) and living in Albany NY, we took a couple of weekend trips down to NYC.  In 1994, we mainly stayed around Midtown.  We did Time Square, Central Park, and went up in the Empire State Building.

The next year, we spend a day in lower Manhattan, ferrying around the Statue of Liberty, taking the Ellis Island tour, and going up in the World Trade Center.

I was surprisingly moved by the close-up sight of the Statue of Liberty.  I was absolutely floored by the Ellis Island tour.  Two of my grandparents and two great-grandparents came through there and I had no idea how chaotic and frightening it must have been.  After the tour, I found the name of my mom’s grandfather on the long, winding “Immigrant’s Wall.”  My Uncle Joe had it put there back in the '70s.

But the highlight of it all was going up in The Towers.  I had a new videotape camera then used it to shoot our whole trip.  That’s the “material” I had to unearth.  I wanted to find some of the selections and get them into electronic form.

Because I’m still pretty low-tech about my media hookups, I was reduced to playing the video on the TV and shooting the screen with my digital camera (in movie mode).  The quality isn’t the best, but it gets the job done.

First, we went up to the observation deck on the 107th floor of the South Tower.  It was nice and safe and glassed-in.  The funny thing was that whenever I pointed the camera at the antenna on the North Tower, I got a lot of buzzing feedback.

More from the observation deck:

After that, we took an escalator up to the outdoor rooftop of the South Tower.  That was the coolest part to me because that’s where I saw the giant ape jump from one tower to the other in the shitty 1976 remake of King Kong.

They had an inner wall set back about 20’ from the edge of the building, so there was no way to have any “accidents”.  Even so, Future Ex was scared shitless up there.  She wouldn’t come anywhere near the inner wall.  She stayed back by the building doorway, clutching the wall like she was Spiderman.  Seriously.

Anyway, this footage is what I remember about The Towers… looking down at the ground so unbelievably far below.  And that what hurts the most; thinking about how bad it must have been in the building to make people think it was a better idea to jump out.

There are millions of stories from this day.  2996 of them end in tragedy.  Our country has yet to psychologically recover and it’s understandable.

It’s a thin margin between maintaining the freedom that makes this country what it is and protecting it so that this kind of abomination never happens again.  I don’t know if we’re up to it.  I know it will take more than burning books or thinking with one’s balls.  We can’t fix symptoms; we have to fix the roots.

Until that happens, we can never truly relax again.
Posted by bluzdude at 11:46 AM

Email ThisBlogThis!Share to TwitterShare to FacebookShare to Pinterest
Labels: Office Bluz, R.I.P., Things That Piss Me Off