Over Memorial Day weekend, Baltimore took another public punch in the mouth from reports of mobs of 300-500 kids running wild around the Inner Harbor (tourist) area. The kids were disrupting traffic, fighting amongst themselves, jumping on cars, robbing and threatening people and basically enjoying the “safety of the herd.”

The police were able to diffuse the worst of the situations and eventually disperse the crowd. Six people were arrested but there were no injuries (caused by the police).

In the aftermath, city officials, citizens, and the media are squabbling over the incident. It’s all the usual stuff…

“Arrest the lot of them, they’re all thugs and punks.”

“Don’t blame the kids, they don’t have anything else to keep them busy.”

“This is why we need concealed carry.”

And on it goes. Everyone’s talking but there’s no consensus and nothing changes. I expect the same story from 4th of July weekend and Labor Day.

But it did get me thinking, in the broader sense, about what kids today are supposed to do.

There are a lot of things where kids have it better than I did when I was growing up… hundreds of TV stations instead of 4, dazzling video games to play instead of “Pong,” the entirety of civilized knowledge to carry around in one’s pants pocket…

But what about the jobs? When I was 16-17, most of my friends and classmates had jobs. I worked at a grocery store, then a gas station and a record store. I was thankful to avoid the food industry but there were lots of jobs to be found there.

Director’s DVD Commentary: I’m omitting the several months I worked at a glass factory, or what I call, “My Summer in Hell.” I earned a higher wage, but it cost me my job at the grocery store when summer was over. Hence my stint at the world’s chintziest gas station.

Where are the jobs for teens now? There used to be tons of jobs in stores in malls, but those are just gone. Disappeared along with the malls themselves. Amazon put them all out of business. My old record stores? Even in the malls that are left, there aren’t many music stores. I mean, why would there be? Who even buys the physical music media anymore? Any song you want to hear is only a .99 download away (if you can’t figure out how to get it for free).

Remaining retail outlets are rolling out self-checkouts as fast as they can. There go the cashier jobs. When I go to the big box stores, there are still a handful of cashiers alongside the self-scanning stations, but not nearly as many as there used to be. And the more we become accustomed to scanning our own stuff, the fewer cashiers there will be. Pretty soon, it’ll be down to one poor lonely cashier, there solely to ring up the rebels and cranks who refuse to do it themselves.

Even warehouse and stocking jobs are becoming automated. Amazon uses robots all over their warehouses. Grocery stores, at least the bigger ones, are often stocked overnight, which is not conducive to school-aged labor.

And where there ARE jobs available, they have to fight 20-somethings and retirees for them. 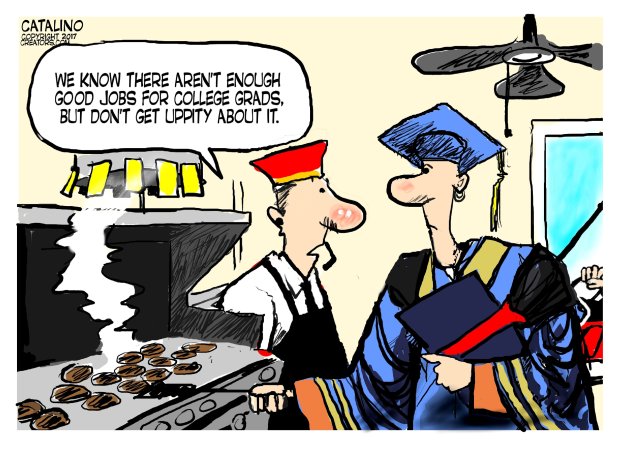 So what’s a kid supposed to do in 2019, get a fake ID and drive for Uber? IF they can get their hands on a car? That’s why we see kids running drugs or working the squeegee on street corners.

I got my first job at 16 and but for a few brief gaps, worked continuously through college and beyond. Those part-time jobs paid for almost the entirety of my college education and gave me money for dates, gas, beer and the occasional record album.

Those jobs taught me about the real world, where I had to be responsible, dedicated and do things correctly. When I didn’t, I’d get written up or fired. It was on me to stay in my employer’s good graces.

I’ve always been proud of my relative* self-sufficient teenage years and I was only able to feel that way because there were jobs available to me.

I say relative* because I lived at home and commuted to college, so I had free room and board. Going to a local and affordable state school was a conscious choice I made to keep costs down. Also, note that this was back when a part-time job could still pay for college. Current tuition rates, in comparison to current wages, make that impossible today.

I don’t want to make alibis for anti-social behavior, but I might feel a little boisterous too if I had no money, no job, and no prospects for changing that equation. City leaders can ruminate on creating places for leisure activities, but that only moves the problem to a different location.

A job teaches responsibility and instills a degree of pride and self-worth. Maybe they can find a way to create some of those instead of kicking around another skateboard park or motocross track that never comes to pass.

This is an interesting topic and raises a number of questions. Most immediately, given that there are millions of teenagers who (for whatever reason) don't have jobs, what percentage of them engage in violent behavior? Given that behavior like this doesn't seem very common, it's apparently a really tiny percentage -- which suggests that lack of jobs isn't the real root of the problem.

Also, how do other countries avoid this problem? There are many advanced countries where many teens don't have jobs, but such outbreaks of violence don't happen. What are those countries doing that we're not?

In any case, disappearance of menial jobs due to automation is taking place through the whole economy, not just sectors where teens used to work. Any reversal of that trend through government action will be artificial and unsustainable. It can only be addressed through ideas like basic income. For most adults, having enough money to avoid the need to work is the ultimate dream. For teenagers, too, there are plenty of other things to do.

It's tempting to attribute the violence to ennui, cynicism about the rigged economy, despair over same, etc., but none of those explanations addresses the fact that only a tiny fraction of teens are violent. For them, I doubt more plentiful jobs would help. Not many employers would hire one of the teens who participated in a riot like this. Businesses aren't social welfare agencies. They don't want the headache of dealing with somebody like that.

The unpleasant fact is that not everything about personality is determined by environment (actually most of it probably isn't), and some people are simply bad people, and those people are presumably teenagers at some point in their lives. If hundreds of people rioted and there were only six arrests (and probably even those won't face any serious punishment), there's no deterrent to the behavior and they will probably just continue to escalate it until more serious crimes later in life bring them into the adult criminal-justice system.

I don't know what the answer is. We really do need to look at what other countries are doing. I suspect that if a riot like this happened in Japan, the police would do a lot more than arrest six people.

I am afraid that no matter what I say here I will sound like an old fuddy duddy. But I am. I agree here 100%. I recall a time when I said to my father that he could afford something that I wanted. He said you're right I can, but you can't can you? Better get a job then. I got a job. I had my first job at 14. picking strawberries. Didn't eat them for 20 yrs after that. But that money bought me stuff, albums, clothes, things I wanted that my parents did just buy because I wanted. (like a nickel bag of pot in 1972) I had many many jobs. It makes for a good work ethic and as you know being self employed now I get some real doozies that apply. My favorite is the idiot (24 yrs old) who called in tired. His 3rd day he called in fucking tired. We let him go so he could get his rest.

No question that a lack of jobs, or other things to do is only a piece of the puzzle. Poverty, lack of decent education, lack of parental supervision, appeal of gang activity... it all feeds into the mix.

Also, they're kids. How many teens have the fortitude to stand up to a bunch of their friends and say, "No, I'm not doing that." It's possible, but would be remarkable, I'd think.

Baltimore is a tough landscape and the police have a tightrope to walk. If they went in there busting heads and dragging kids off, the Inner Harbor would be in flames.

We already had one riot over police brutality and the community does not want another. The cops did their best to collar those who were ringleaders or were driving the "action."

I thought "6" was light too, but that's probably all they could manage without resorting to the heavy-handed tactics that lit the fuse before.

Plus, the Baltimore City Police are trying to get past the "Gun Trace Task Force" debacle, which was a team of specialized cops who rolled drug dealers, stole their money, (or that of any other guy they came across who had some), planted evidence, falsified overtime records and so forth.

I don't know how the job situation will ever be resolved either. It's bigger than a government program or a company like Amazon coming to town. Entire sections of the former job market are disappearing before our eyes, and I don't see enough new opportunities taking their place.

It's all becoming a business owner's pipe dream... all the work done, a fraction of the people on staff, and massive savings from not paying wages, overtime, insurance, payroll taxes, and much less theft.

Unfortunately, it doesn't account for people having enough money to shop for whatever products they're selling.

My dad always said that my taking that job in the glass factory ensured that I would get a college degree, lest I have to return to it.