Civics 101
I never took “civics” in high school; it was called US Government when I took it, but the content under either name should be required viewing before posting racist memes like this: 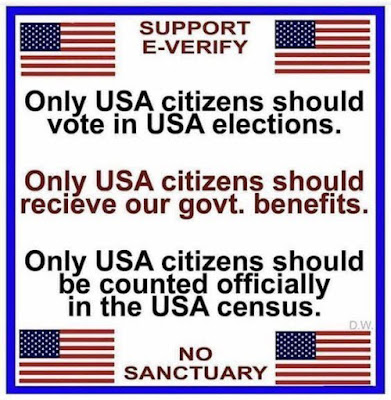 “Only USA citizens should vote in USA elections.” Already true, with any variance being statistically negligible.

“Only USA citizens should be counted officially in the USA census.” The Official USA Constitution requires the count of all people, citizen or not, in the USA census. The Right is supposed to cherish the Constitution as it was written. “Originalism” is a main requirement to get the GOP blessing for a SCOTUS nominee. But as most things with Republicans, they’re all for an idea except when it becomes inconvenient to their topic of the moment.

That’s What HE Said
Speaking of racism masquerading as “border security:” 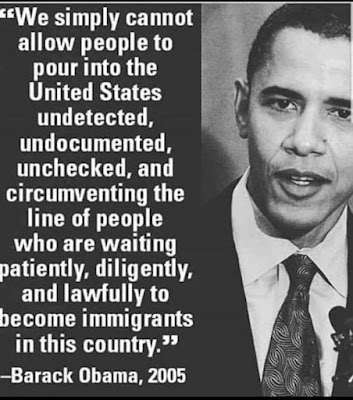 Meme-sters are trying to show Democratic hypocrisy but linking this statement from then-Senator Obama with the current protests about the Trump southern border policies.

There really is no disconnect. Yes, what Obama said is what most Democrats want. We are NOT for letting people flood across the border all willy-nilly. What’s more important are the things we are also not for, like:
·        Forcibly separating children from parents, as a matter of policy. (A policy highlight, in fact.)
·        Holding said children (and adults) in subhuman conditions.
·        Continually moving the goalposts for what it takes to become a citizen or claim asylum.

Until conservatives propose the same things for our northern border, it’s a simple matter of racism. If the current policies were really about not allowing criminals into the country, they wouldn’t keep making it harder and harder for anyone to immigrate legally. They are 100% trying to limit the number of brown people in America.

Same Old, Same Old
I’m getting pretty tired of this one: 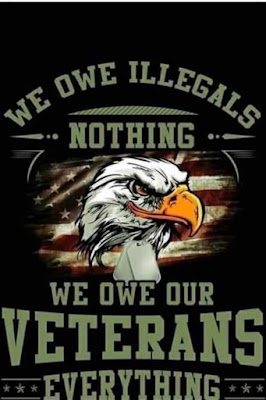 “Illegals” basically get nothing already (except incarcerated). And yes, we DO owe veterans. So where are the Republican plans to help them? Republicans have been in undiluted power for 2 years. And even if they approved a plan for veterans NOW, the Democratic House would support it too, unless they added the requisite “poison pill,” like “Wall” funding, to ensure the Dems don’t support it. That way they have a campaign issue and more memes to circulate: “Hey, The Democrats voted against Veterans!

Also, please explain why this is always presented as a binary situation. It’s always, “issue of the day” vs “why aren’t we helping veterans?”  Believe it or not, we can do multiple things at once.

How come conservatives aren’t making memes like “Why can we can push billions of dollars to corporate agribusiness giants, but not help homeless veterans?”

Republicans love veterans, especially as a club against any other public works, but not so much that they’ll do anything for them.

Deliver Us from Evil
I take this to be an anti-gun control meme: 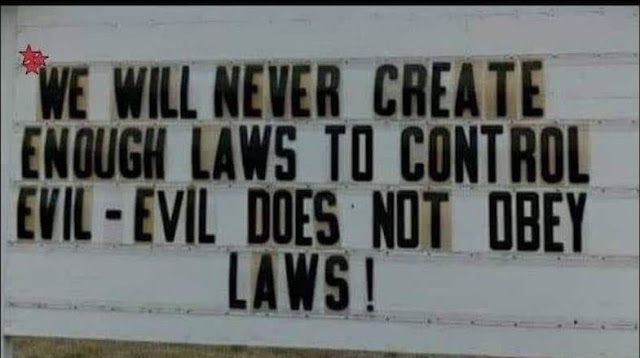 They’re saying there are no laws we can pass to prevent people using guns to kill.  Of course, we already have laws addressing all kinds of evil: murder, rape, kidnapping, torture… should we just scrap those too because evildoers don’t obey laws?

Obviously, gun murderers kill in defiance of the law. But do we have to make it so damned easy? That’s the goal of the recent, reasonable gun proposals: background checks, banning semi-automatic weapons and high-capacity clips. With laws like those on the books, future killers may take a hit to their killing efficiency. Instead of killing 20 at a clip, maybe they kill 5 or 10 because they were stopped when they had to reload. Is that not a worthy, attainable objective?

Of course it is, but the gun nuts seek to misdirect and muddy the moral clarity here.

Chief Running Scared
Yes, the last gasp of gun apologists… defending the homeland against our own government. 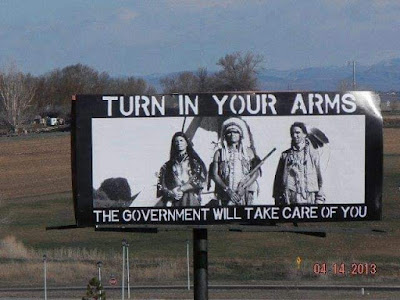 Dear Rednecks,
If the good old US of A wants to, they can squash you and your buddies like bugs, regardless of how many AR-15 Bushmasters you have on hand. This is real life, not “Red Dawn.” A band of plucky rebels is not going to hold down the fort against US Army firepower.

Just ask the Taliban. They had a lot of semi-automatic weapons too. The USA military wiped them out like swatting flies. (You know, back when that was an active operation. And much like bugs, they came back.)

If that’s the best argument you have against banning semi-automatic rifles, you’ve already lost. You and your buddies can get along just fine hunting with standard rifles and bows and arrows. And there will be plenty of handguns available to protect yourself and your loved ones.

But this “budda-budda-budda” fetish of yours has got to go.

Where is That Forest? All I See are Trees!
Because BET is causing so much angst in the white community: 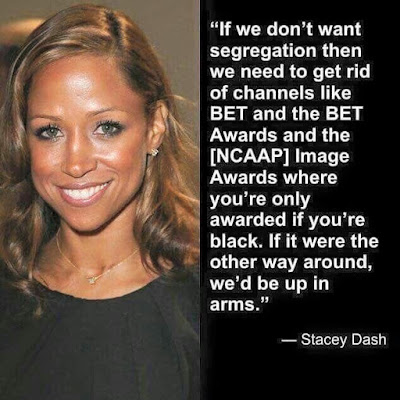 Yes, black people can have the BET Channel and the NAACP because white people have everything else. I suppose in the next meme, they’ll be going after Univision.

Since the dawn of film and television, the media has been predominantly and overwhelmingly white. Even as recently as two years ago, it took a social movement to get the Oscars to start taking African-American films and casts seriously.

We have a market here that has been so marginalized in popular media that they had to start their own channel and awards, and you want to take THAT away too?

All I see here is the “race” version of straight guys wanting Straight Pride parades. It’s a farce.

Bring Out’cher Dead
I haven’t heard of any cemetery fence protests, but OK... 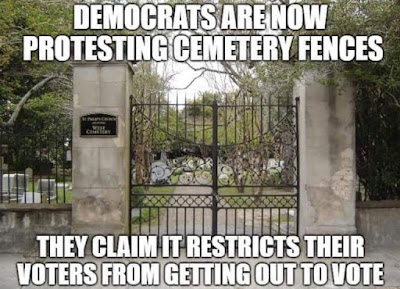 I presume this is a shot at the social media noise regarding names of dead people showing up on voter rolls. That made for a solid-sounding basis for Republicans to insist on requiring voter ID at the polls. (And totally NOT because it suppresses likely Democratic votes.)

But this point is just as misleading as all their other points on the issue. What the meme-makers don’t want you to realize is that while they found names of dead people on voter rolls, they did not show any significant casting of votes under these names. In other words, no harm, no foul.

At most, it’s a matter of poor precinct housekeeping. It is most assuredly NOT a basis to deprive voting rights to a significant segment of voters (who in a wild coincidence, just so happen to oppose your candidates, platform and attitude).
Posted by bluzdude at 6:33 PM

I'll get on my tiny matchbox and say that as a USAF Veteran, I've seen what vets go through to get information, return phone calls, benefits they deserve, recognition, treatment, timely appointments and more and homelessness. There is NO reason a veteran should ever be homeless, living in the woods, in cars, or on the streets without something so basic as a pair of socks on his or her feet, or food to eat. I cringe every time I think about all the businesses, including Walmart that don't even offer discounts for one day a year (Veteran's Day). I'm grateful for those who are committed to helping and recognizing veterans and many of the programs, but I'm afraid that most people simply don't get our plight. Hugs, RO

I agree 100%. I'm looking forward to reading something about how there's a new bill to address the problems at the VA and to ensure US Veterans have what they need to live a regular life, rather than see them merely being used as a club against any other proposed program that might help someone.

They did their part; we need to do ours.

It's too bad, in a way. All the people who've died because Republicans quashed universal health-care coverage and sabotaged the ACA deserve a vote from beyond the grave. They're probably a pretty substantial demographic by now.

Night of the Voting Dead -- a new horror film for wingnuts.

After the Voting Dead stagger out of the graveyard to place their votes, the film comes to a climax where Trump is unseated and the Voting Dead break into the Thriller Dance.