When You Can’t Win the Argument, Change the Subject

Republicans still haven’t seemed to internalize that their Golden Calf has been caught dead-to-rights in impeachable conduct, as specified specifically in the Constitution. As witness after witness testify as to the accuracy of the QPQ with Ukraine, the response from the faithful continues to be alibi and distract.

“Everyone does it. It’s not illegal, it’s foreign policy. It’s a coup. It’s violating the will of the people. It wasn’t even successful. Hey, look at the scandals from Obama/Clinton/anyone else.”

Nancy Pelosi nailed it when she flat-out called it bribery; the exchange of money for the desired action. Trump offered money only if Ukraine took the action he desired. That action was to dig up political dirt on an election rival. That’s bribery and it’s an impeachable offense according to the Constitution.

Remember that it wasn’t just dirt that the Trump Administration was looking for, they also wanted Ukraine to announce that the election hacking from 2016 was done at the behest of rogue factions within their own country, as opposed to Russia. In other words, lie for him, in exchange for military aid.

This is what otherwise sentient people are twisting themselves into knots to defend.

“Everyone does it. It’s not illegal, it’s foreign policy.” No, they don’t, yes it is, and no it’s not. When has a US governmental entity ask for a foreign government to fabricate the wrong-doing of a political rival? See, it’s not a matter of using a foreign aid package as a carrot to induce better behavior like ending the legal persecution of gays. That would be considered “foreign policy.” This is the highest representative of the US government asking another country for something underhanded for personal gain.

Regarding illegality,  “Article II, Section 4, of the Constitution says the president “shall be removed from Office on Impeachment for, and Conviction of, Treason, Bribery, or other high Crimes and Misdemeanors.” There’s no finessing around that one. I’m sure that’s why the Democratic leadership chose this hill to go to war on, as opposed to emoluments or obstruction of justice.

It’s a coup. Nope. It’s an action prescribed by the Constitution to address crimes committed by a sitting president. If Trump goes, Pence steps in. Where’s the change of power? And in the unlikely event that they attempt to impeach Pence, it doesn’t seem plausible that they’d both go at the same time.

That’s what would have to happen, because if Pence were to assume the presidency, especially if his name is bandied about impeachment talks, I’m sure the first thing he’ll do is name a VP. That would be essential to prevent Pelosi from stepping in to replace him. Republicans still have the Senate; Pence wouldn’t nominate anyone they wouldn’t approve.

So, no coup. That’s just more panicky talk; just one more piece of something sticky to throw at the wall. Anyone talking about a coup doesn’t know what the word means.

“It wasn’t even successful.” Talk about a stupid defense. Everyone knows that people still get convicted and go to jail for attempting crimes. Guilt isn’t dependent on the success of the crime. This is the kind of desperate talk we get when people have to blindly defend someone no matter the circumstance. 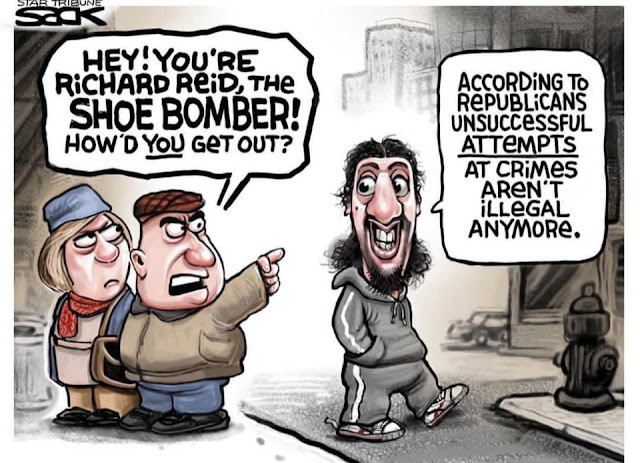 Hey, look at the scandals from Obama/Clinton/anyone else. Finally, we get to the What-About-ism; that someone somewhere has done something as bad or worse.

Yes, who can forget the Tan Suit Scandal, the Coffee-Salute Scandal, or the Marine-Holding-Umbrella-Over-President-in-the-Rain Scandal. Oh, right, let’s not forget Hillary’s child-sex ring run out of the basement of a pizza shot that didn’t even have a basement.

Fox “News” spend hours winding people up over these “scandals,” because over eight years, they had to complain about something, even if they were things their own standard-bearer was photographed doing. 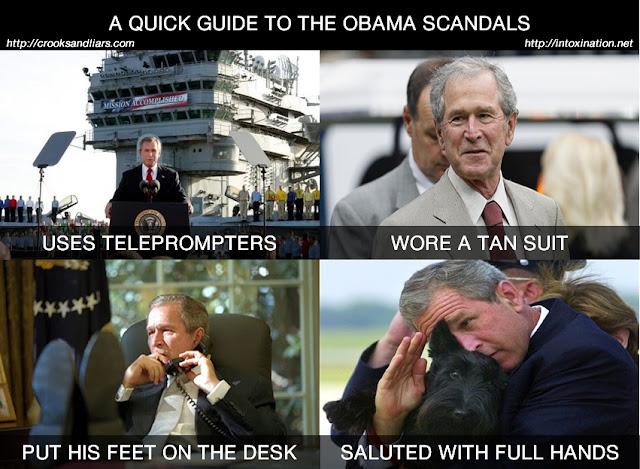 I think Jon Stewart said it best when he said at the Rally for Sanity, “When you amplify everything you hear nothing.”

Yes, I know, conservatives think there were more scandalous things during the Obama Administration, but mostly it’s a case of believing their own bullshit. There were some things they desperately wished were scandals, but turned out to be nothing-burgers.

Fast and Furious: An ATF plan gone wrong. They lost the guns. Fox “News” acted like Obama was running the guns himself. Presidents aren’t usually involved in the minutiae of planning and executing ATF operations. Worst case scenario, he said, “Yeah, track the guns.”

IRS persecuting conservative groups: Lots of wailing about that despite the eventual finding that both conservative and liberal groups were denied tax-free status. Plus, the whole thing arose out of a single office in Cincinnati. There was nothing to show any input from the White House.

Benghazi: Somehow this embassy attack was so much more heinous than the multiple attacks that occurred during the Bush Administration. Republicans conducted investigation after investigation and came up with nada. Besides hushing up the voting down of an aid package that would have bolstered security at that very embassy. They don’t talk so much about that.

Her Emails/Server: Again, there were countless legal and congressional investigations conducted with another big, fat bagel to show for it. And it’s almost comic that the Trump Administration did and still does the same stuff Republicans were raking Hillary for… using personal phones and keeping a personal server. The upshot of all the email investigations was that they couldn’t come up with a single “state secret” that was outed on account of her security lapse. Hell, we know that Trump has given military intel to other countries himself, which what everyone was so afraid of Clinton doing.

Or maybe the whole thing was just a cover to keep her name and the word “scandal” in the headlines during a presidential campaign.

It amuses me how so many Republicans think that the Clintons are some kind of mob family with 30-40 kills to their credit. Funny how there’s never been a single piece of actionable evidence to back that up. I say, if she can do all those things she’s been accused of, not have any evidence appear and not have anyone turn on her, then she’s totally the one who should be dealing with the likes of Putin.
Posted by bluzdude at 6:51 PM

I may be wrong, but I think a newly-appointed Vice President has to be confirmed by the House as well as the Senate. That might be a real problem if Pence replaced trump and then had to choose a new VP.

I just looked it up, which I should have done before posting, and you are right. A new VP must be confirmed by majority vote in both houses.

That would add a twist. It's a long shot anyway. I don't think there's any scenario where the Senate votes to convict. They're all in on keeping power, no matter what Trump does.

Three jobs I would never want - President of the US or any other country for that matter(lol) because there's too much stuff going on, a baker because my desserts always suck, and any type of judge in the Judicial System, because I wouldn't want to have to figure out all the stuff that's going on and rule on it.(lol) Hugs, and Happy Wednesday! RO

Come on! How can a dessert ever suck? It's awesome just by definition.

Everybody has an interpretation. Get back to me when someone who claims to be victimized decides to sue Trump et al.

Notice you didn’t mention Susan Rice. Did you watch? That talk show Sunday after 9-11-2012? All day. ALL day long! Same exact speech. On every. Single. Program. I can still see George Stephanopoulos smiling and nodding, holding his microphone under obviously lying Susan’s lips. Truly. NODDING along. As Obama’s National Security Advisor(!) repeated for the umpteenth time “That’s correct. We blame a five year old internet video for the spontaneous riot, attacks, and horrific murders of our American personnel in Libya. 9-11 is just a coincidence.” Come ON. You think good ol’ Susan baby went those twenty rounds of her own volition!!??

Gee, talking points. Republicans never use those... not since, well, yesterday.

Debra She Who Seeks said...

You picked a great political cartoon and meme for this post! Thanks for popping by my blog today. I enjoyed reading your thoughtful comment.

I see your comments all over other blogs I follow... it was about time I came to visit yours.

Bribery for sure, but also misuse of taxpayers money (earmarked by congress for Ukraine but also used as bribe money for personal gain by Trump), and perhaps 'a little light treason' in that it debilitated an allied nation to the detriment of US interests and advanced the cause of Russia who happens to be a rival, if not an enemy.

"...lie for him, in exchange for military aid."

Thank you so much for putting it that way. So much of the reporting on this subject, even on left wing blogs, has referred to Trump wanting an "investigation" of Biden. This is false, as there was never one second when Trump or any other Republican leader did not know that it was nothing but a pack of lies. What Trump wanted was not an investigation, but the fabrication of smears against his opponents.

Exactly. He didn't care what they actually DID; he just wanted them to "announce" that they were investigating the Bidens, and of course, that they really hacked the election, not Russia.

They knew that no one here really knows what's going on in Ukraine, so if they said there was an investigation, that was something the Trumpsters could flog every day on Fox "News."

"A little light treason," sounds like something a country would put into a multi-national personals ad.