The Only Way They Win is by Rigging the Game

Be on the lookout for a coordinated effort by the GOP to enhance their voter suppression efforts. It’s already starting, judging by how many memes like this I’ve been seeing on Facebook. They’re getting the message out to their minions early. 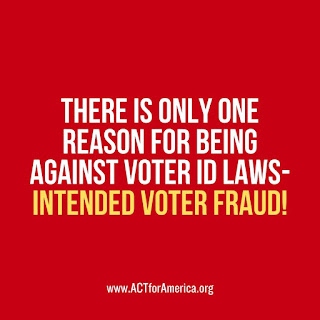 I beg to differ but there are plenty of reasons to be against demanding voter ID.
·        There has never been a statistically significant finding of voter fraud that could have been averted by voter ID. And this is with a Republican-run Justice Dept. out there specifically looking for it, mainly from Democrats. They found nothing (other than random Republican malfeasance, but charging Republicans wasn’t in their charter).

And not for nothing, stealing votes by impersonating voters one by one, in person, is the most inefficient and ineffective way to do it. It just doesn’t happen.

·        The existing voter ID laws are specifically constructed to reduce Democratic voter turnout. The Supreme Court case that ruled against North Carolina showed there was significant, compelling evidence that State Republicans were writing their requirements “with surgical precision” so to prevent as many African-Americans (seen as likely Democratic voters) as possible. They had direct physical evidence that demonstrated how they did it. It was not remotely ambiguous.

Other states use the same or similar criteria to write their voter ID laws; they just haven’t had the bad luck to have their written deliberations aired in public. (In the NC case, the daughter of the guy who designed the bill found and released her father’s emails, which showed how they researched minority voting patterns and what kinds of ID they most often carried.)

And note: The Supreme Court only scrapped the NC law due to a 4-4 tie, which by default, upheld the lower court’s decision. That will not happen again with the current SCOTUS. With the Wisconsin decision, the Roberts Court announced that they are now on board with voter suppression by any means necessary.

·        Republican-run states who demand voter ID are simultaneously closing MVA stations in areas that serve likely Democratic voters. They demand the ID and then make it much harder and more expensive to obtain one. That’s not an accident, that’s a design feature.

They’re also closing voting stations in the same areas, thus intentionally creating lines of prohibitive nature. They WANT it to take up hours to vote, hoping that many will skip out. (And then, in the truly devious part, they purge voter rolls of people who haven’t voted recently.)

What this shows is a pattern of pursuing voter disenfranchisement. It’s laughable to claim that it’s only to deter voter fraud and that all the known “side effects” that prevent US citizens from voting are just a big coincidence. I’d have more respect for them if they just came out and admitted it. LIKE TRUMP DID TWO WEEKS AGO!

Just kidding, I still don’t have any respect for him. But he did say this out loud: “They had levels of voting that if you ever agreed to it you’d never have a Republican elected in this country again.” He’s talking about mail-in ballots, with which all their hard-earned voter suppression would be circumvented. That’s not a matter of fraud, it’s a matter of not having a platform that the majority of Americans will support.

Trump said the quiet part out loud: if everyone votes, we never win again. And for once, he’s right. That’s the reason for the voter ID laws and closing voting and MVA locations, fighting early voting and on-site registration, clearing voter rolls of hundreds of thousands of names with minimal verification or confirmation, and appointing judges who will bless it all in court. 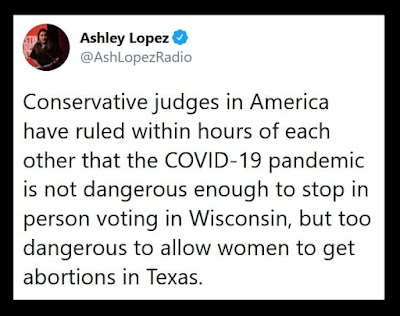 It’s all about winning the next election. Preventing “voter fraud,” something that has never swung an election in modern history, is nothing but an elaborate and wholly ineffective fig leaf.

The real threats to voting integrity come from hacking and electronic voting machines that lack a paper trail. Voter IDs do not address any of this.

You don’t see Republicans out there trying to sell people on what they actually plan to do. It’s easier to keep people from voting than to convince them that cutting Social Security and privatizing the post office is a good idea. Or that 1% of the people should get 98% of the tax breaks. Or eliminating the effectiveness of the EPA, FEMA, the CDC, and the Consumer Financial Protection Bureau. That’s stuff they have or are still trying to do.

This is how the political arena is supposed to work. There are two (or more) sides and one giant population. Both sides should try to convince the masses why their ideas are better. Those who are the most convincing, as evidenced by the votes of the people, get to govern. Period. But we’ve strayed far from that ideal.

The right (not privilege) to vote is essential to being an American. Republicans, who fight so hard to make the Second Amendment absolute in ways it was never meant to be, abdicate their righteousness when they fail to defend the principle of one person, one vote.

Unless it’s one of their persons, of course. In that case, the more the better.