The horrific conditions in Texas should go down as a lesson on what happens when Republicans get to be in charge for a prolonged period of time. Texas is basically a Republican playground; they get to do whatever they want.

And what Republicans want is to make as much money from selling you power as they possibly can. So they have, as I’m sure you’ve heard by now, an isolated and deregulated power grid. The goal is to provide power cheaply, which is not to be confused with “reliably.” That’s a whole different story.

They could have spent some money on winterizing their equipment in case of a catastrophic winter storm, but then that would have eaten into the profits. So why bother?

And they could continue to operate some of their systems to provide electricity, but they’d have to do it at a loss. So why bother?

You know how Republicans are always talking about cutting regulations? This is what happens when Republicans have their way with regulations and leave it up to“The Market” to regulate business. The businesses have a great fiscal quarter while “the people” freeze to death in their living rooms. That’s the Republican Way.

Government regulations are the only things keeping companies from operating sweatshops and paying pauper’s wages. When Republicans campaign on cutting regulations, it’s not for your benefit, it’s for their benefactors’ benefit. So they try to sell it to you by calling it “red tape.”

Yes, red tape can be a real pain in the ass. But without it, you won’t feel the pain in your ass because it will have frozen off when the power goes off.

And what do they do when the power goes off because they declined to winterize their gear? They blame “green” energy and the “Green New Deal,” which laughably, hasn’t even been brought to a vote, let alone become a law. The windmills were some of the few things that still worked in Texas.

It’s really amazing when conservatives start talking about green energy because it just shows how little they know about it. They claim that the windmills won’t work in the cold and solar panels won’t work when it’s cloudy, both of which are patently false. They circulate bogus pictures of what they call lithium mines, (used in making electric car batteries) which are often actually copper mines. (Have they ever seen what happens when coal is strip-mined?)

All they know is that Fox “News” told them renewable energy is bad, (because that’s what Rupert Murdoch and the fossil fuel robber barons told them to do,) and elaborated on all the bizarre consequences we’d see if oil and gas markets were to diminish. So it must be true. Besides, criticizing green energy owns the Libs!

Maybe the thought of all us “owned Libs” will keep them warm when their furnaces won’t. If not, they can always take off to Cancun.

Seems the impeachment is still a bitter pill for the Right, so they’re getting themselves all jacked up to hold their own impeachment… they just can’t find anything tangible to impeach over. 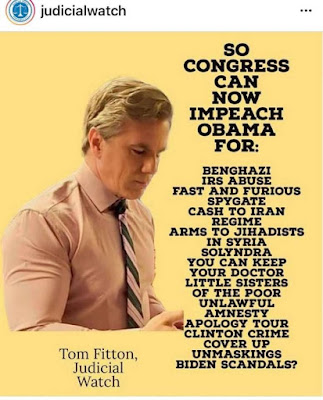 This is nothing but a laundry list of things they tried to make into scandals but couldn’t. The headliner was investigated by 11 Congressional committees and they still couldn’t find enough to file charges. And the rest of them, even the most serious ones aren't anything but minor annoyances. Most are fabrications, banal issues they’ve tried to inflate via misinformation and missing context. There’s nothing that rises to the level of an impeachable offense, let alone match the heinousness of violently trying to overturn an election by hunting down and killing Congressmen and women with whom they disagree.

And you want to impeach Obama? Have at it. Obama’s place in history is secure. The only people whose reputations will suffer from such an attempt are the prospective impeachers themselves. If they can’t overturn an election with lies, they’ll try to lie their way through an impeachment, six years after the fact.

And speaking of old news: 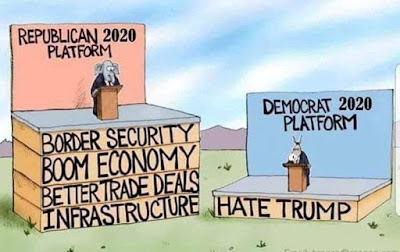 Right off the bat, notice how the “2020” has been added after the fact. (It's in a different font.) This is an older cartoon, probably from the mid-term elections. Because in 2020, the Republicans didn’t even bother to create a platform. They just went, “We’re for whatever Trump says.”

But let’s briefly look at the details, shall we?

Border Security: Everyone wants border security, but to Republicans, that just means no more brown people can come in. The Wall, which was supposed to be the symbol of border security, was a disaster. Very little new wall was built; they mostly replaced old wall. The wall they did build was hardly impermeable. People who knew how could climb it with ease, as well as saw right through it. And like all walls, it could be run around, burrowed under, or flown over. Real secure, that wall. Face it, the highlight of the Republican Border Security Effort was how many people they could stuff into cages.

Boom Economy: Are you joking? Aside from the stock market, the Trump economy was a mess, even before COVID tanked it. There was little increase in wages, prices continued to rise, and people needed several jobs just to get by. All of Trump’s efforts went into tax cuts for the rich, which translated into gains in the stock market as companies bought up their own stock, rather than create more jobs or increase pay for the ones already there. And the scraps the rest of us got? They were designed to evaporate over time.

Better Trade: Another joke. Trump’s trade wars cost Americans money because he’s not smart enough to know who pays for tariffs. And then China found other people who would sell them grain or meat, so American farmers had to take government handouts too. Gee, what a business genius!

Infrastructure: I’m dying here. What exactly did the Trump Administration do for infrastructure? There were no roads bills, no bills to repair bridges or shore up our power grid. The only thing even close to something that can be considered infrastructure would be the small section of crappy Wall they built on the southern border. With 100% control of the government, Republicans didn’t do jack shit for the country’s infrastructure. If I were them, I’d be embarrassed to even bring up the topic, let alone publicize it as an accomplishment.

And as far as the Democratic platform goes, they don’t have enough room on the sign to hold it all. I’ve written about it extensively. They wish hating Trump was all we had.

Now a couple of quick ones: 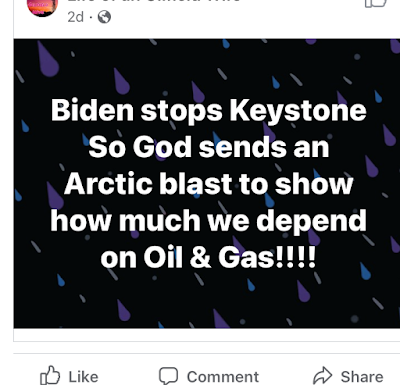 Yes, God cares so much about a canceled oil pipeline deal that He sent an Arctic blast, just like the ones we get on a regular basis. God must be an oilman, I guess. This is fucking ridiculous. If he were the meddling type, wouldn’t he just have Biden undo the cancelation? Or maybe eliminate the Coronavirus? Why not just sign your name, “I Don’t Know How the Government Works.” This is too stupid to even debunk. All I’ll say is, “How many executive orders did Trump sign while he had both sides of Congress for two years?” (The answer? A lot.) Now sit down and shut up, the grownups are talking.