Well, it looks like the Dogs of War are barking up a storm. The morning and afternoon news was all about how we now expect Russia to invade and not only engage with the Ukrainian military but move against civilians, especially those who they deem as likely to resist Russian occupation. They’re expecting abductions, assassinations, detentions, and the like. So how’s your 2022 going?

Here’s one angle I haven’t heard covered yet, regarding the reasons for Vlad’s insistence in pursuing this universally decried aggression. I think it could be more election manipulation.

If they can make the US look bad or ineffectual, he knows the right will put the blame squarely on President Biden. Those who don’t follow the details are likely to agree, given the hue and cry they’ll see coming from the Right. Maybe this is a way to get another Russian-friendly stooge in office, to eliminate the largest and most effective source of resistance. Maybe it’s the former stooge again; maybe it’s another devoted MAGA.

They’ve already spent a great deal of time and resources engineering the 2016 election, why not try another tactic? This way he reclaims old Soviet territory and neuters his opponent at the same time, killing two birds with one tank. 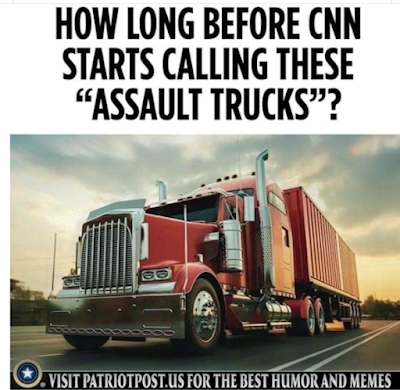 Answer: Just as soon as there’s no more regulation on trucks regarding their speed, loading limits, driver qualifications, and requirements. I’m sure the NRA can let them borrow some legal language to pursue to convince the courts that driving a truck anywhere at any time is somehow a Constitutional right. If more people start getting killed by trucks, that’s just the price of freedom. 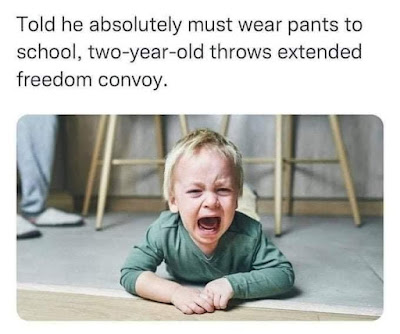 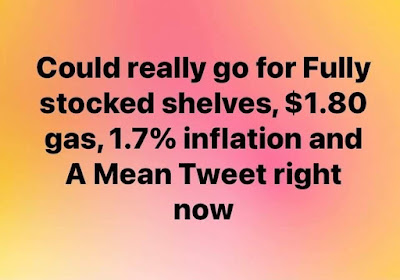 And I could really go for accurate information once in a while. Can conservatives ever make a catchy meme that isn’t skewed, invalid, or just plain wrong?

·        Gas was $1.87 because there was a pandemic sweeping the nation and people staying home and not driving. It was simple supply and demand. The demand was torpedoed. When that happens, prices fall. Is it really worth hundreds of thousands of deaths so that you can have cheap gas?

·        Inflation comes with the cost of a recovering economy. And it wouldn’t be nearly this bad if corporate America wasn’t vested in keeping things expensive. All the large corporations are posting record profits, all the while raising prices due to “inflation.” Inflation of their bonuses, maybe. (And I think this is also a backdoor way of getting more Republicans elected. If the 1% can keep the “inflation” talk coming, they’ll see some more sympathetic congressmen elected this fall and maybe a president further down the road. They know Democrats have a target on their massive profits to target for taxes, you know, so the lower and middle classes might enjoy a slight respite from carrying the country’s financial load for the last 20 years.

·        I think the panic about empty shelves is overblown. I’ve been out shopping several times in the last months and there have been no bare shelves to be seen. Occasionally a store is out of one thing or another, but that’s no different than any time prior. Maybe Baltimore is just an oasis in the vast food desert but I doubt it. It’s supposed to be a pit of death and destruction, isn’t it? That’s what Tucker keeps saying. Yet our shelves are full. This is another Republican gambit to maintain the image of general mayhem and catastrophe, to use for electioneering.

·        Fuck your alibis for “mean tweets.” This is coming from people who want to change history because it might make little white kids sad. Presidents are supposed to model uplifting behavior, not sling slurs at people they deem “less than,” for whatever reason. The party of “Fuck Your Feelings” is only talking about other people’s feelings, not their own. Those are sacrosanct.

The heat is really getting turned up on The Former Family (TFF). Now he’s trying to pull the same shit he used to with the Mueller investigation back then and that Maryland’s State Prosecutor is right now, which is claiming innocence because the prosecutors have an agenda. I’ll say again, if you don’t commit a crime or cheat on loans, land deals, and taxes, there’s nothing to find. But they have reams of evidence on paper. They have all the proof they need right now. I can only suppose they’re not charging yet because there’s still so much more to add to it.

Of course, none of this makes a difference to the MAGA crowd. It’s only a crime when a Democrat does it, especially Hillary. 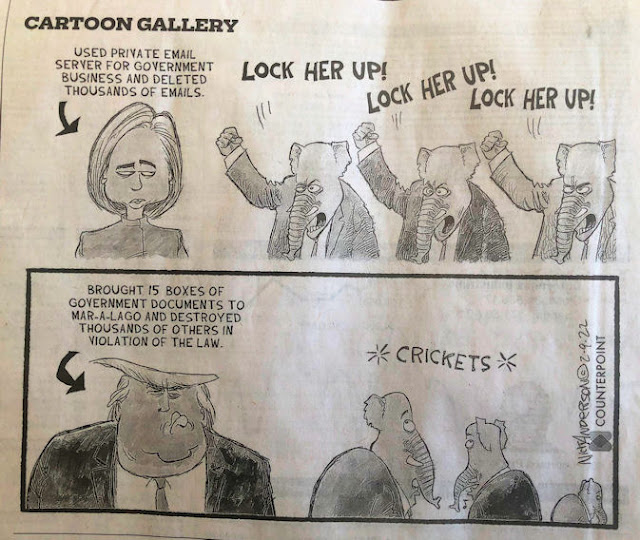 They’re all for locking their political opponents up or even giving them the death penalty but expect their people to get away with anything and everything. They storm the Capitol, kill and injure cops, destroy the facilities, and they’re all martyrs because they were held accountable.

Modern conservatives literally stand for nothing, except “Me first.”

The Olympics has finally come to an end. I, for one, enjoyed watching. I think the winter games seem so exotic. I’d tell you what I think about them but I basically said everything in 2018 that I would say now. But I’ll repeat one part because it still pisses me off.

“One thing that always bugs me: the way photographers badger gold medal winners into posing while biting their medal. Can we please stop this? It's as pointless as it is trite. These aren't 1800s gold prospectors, they're elite athletes. And curlers. If I was a gold medalist, I'd shut that shit down in a hurry. They'd be like, "Hey, bite the medal." And I'd be like, "Hey, bite my ass, you no-talent hack! Why don't you go somewhere and grow an original thought?

For some reason, my dad had a thing about wearing glasses. Granted, for most of his life, he didn’t need them. He was proud of his eagle-eyed vision. But age takes no prisoners. Once he hit his 70s, it was obvious to all that he needed glasses. He’d always say his eyesight was fine, he just had a problem in dim light. But he wouldn’t wear glasses then either.

Eventually, I hear, he lowered himself to wearing non-prescription “cheaters,” from the drug store. But never in front of anyone but Mom.

All that was fine and good, but when it’s time to renew one’s driver’s license, it gets real. But Dad found a way to weasel out of that too. When it was his turn to go for the eye test, he just repeated the series of letters he heard the guy in front of him say. Worked like a charm.

How he managed that with his bad hearing is still a mystery.

As always you're spot on with your Political observations. I find it interesting that everyone on the Far Right has amnesia when the crimes their side commits are notoriously worse and blatant, they don't even try to hide it yet their Base has Eyes wide shut and actually seems to champion the whole Bad Boy Club and Lunatic Fringe they elect. I can't even take someone seriously who would elect a Conman like IQ45 or a Marjorie Taylor Greene and think that's a normal Human Being capable of leading except straight off a Cliff! The Low Information people are more numerous than I ever could have imagined, so are the Lunatic Fringe... and Russia has played the same Game forever but it still seems to work for them, so why change strategies now? Surely our adversaries see how impotent our Govt. has become, and how corrupted, so it's easier for them to cherry pick who they'd run Election interference for, they see how a large swath of our Public Votes and that we've got our own Voter Suppression tactics firmly in place to skew the outcomes, so they've got all the internal Help they'd ever need right now to neuter this Country and get their Puppets in place again.

I think before long we're going to become a larger version of South Africa from the 80s... A minority of white people with complete and indefinite control of the government. It's already happening with gerrymandering, voter suppression laws, election over-ride powers granted to legislatures, amped up police departments getting the benefit of the doubt from the justice system... Unless things change drastically, that's the future we're leaving to our kids.

Well, if I had kids... maybe just other people's kids.

You Dad, just love him!
I wish those who don't believe in bare shelves go shopping with me some day! Or tell me where they shop because it has gotten far worse.

Shop in Baltimore! It's the land of plenty, apparently!

Wow. This site should be Darwinfish2 the Apologist. Why is it leftists cannot ever, even once, just look themselves in the eye and simply say “ Oops. Course correction needed”
And if you think an expansionist minded autocrat like Putin would rather deal with militaristic Republicans in office versus effete Democrats? In wartime? Well, your political science and foreign affairs knowledge needs some tidying up.

When have Rightists ever admitted they were wrong, or one of their leaders was wrong? This sounds like yet another rule that only applies to Democrats.

I’ll be happy to look inward as soon as I see Democrats do something in an official capacity that I don’t like. In the meantime, there are SO many things Republicans are wrong about, I barely have time to fit them all in.

And the soft on foreign policy Democrats… a trope as old as the hills and just as shady. (Kind of like the myth of the “liberal media.”) If it were true, Putin would have been meddling in the election on behalf of Hillary, not against her. He knew she saw him for what he was. So he backed a squishy-soft orange puppet instead. I mean, what’s the point of having leverage over some TV show clown with delusions of grandeur and an ego to match, if you can’t use it to your benefit?

I’ll admit that Republicans are much better at dragging us into wars of choice… all the better to line the pockets of their Defense Industry contractors and donors, right?

Funny how comments like this are always posted under the cover of Anonymity, either a Troll, Bot or some Coward who really cannot identify themselves for fear of anyone knowing who they are. So predictable... you dropped the Mic on 'it'... such Sport it is to dismantle their bullshit.

If it weren't for their never-ending supply of bullshit, I'd have to come up with a whole new angle for the blog. It keeps me going, just because I find their faulty logic and hypocrisy so infuriating.