It was with great sadness this weekend, that I read that blues guitarist Gary Moore had passed away.  He died in his sleep Sunday morning, of an apparent heart attack.  He was 58.
All the obits mention that he was a guitarist for the band Thin Lizzy, but I’ll always think of him first as one of the finest blues guitarists of the 90s.
Back when I was working in the record store in Toledo, I remember he was just another rock act.  I heard that when he opened for Rush at the Toledo Sports Arena, he got booed off the stage, and before he left, chastised the crowd for being rude, saying he’d “never play this fuckin’ town again.” 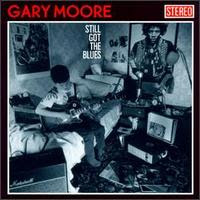 Can’t say I blamed him.
I didn’t hear much about him for years after, until one day I heard a slow blues song with this magnificent, soaring riff.  It was called “Still Got the Blues,” and upon investigation, I saw it was by Gary Moore.  Seems he was reinventing himself as a blues guy.
I cracked a tape for in-store play and the whole thing was rock solid.  There were a number of covers and tributes to people like Albert King and Albert Collins, but the centerpiece was the title track.
Start the video now and listen while you read the rest.  Trust me.
First of all, I can’t believe that Lionel Richie didn’t sue his ass off.  The main riff sounds like it was taken directly from the chorus of “Hello.”
Lyrically, the song is no great shakes… it’s the usual “missing a lost love” motif.  But the melody is smooth and catchy.  It rambles along for about 4 minutes, but then when it’s time for the guitar solo?
Holy hell, Moore just rips it up.  He makes that guitar scream, cry and ultimately howl; like an aural representation of a heart being torn apart.  He alternates between furious picking and long, sustained wails.  I tell you… goosebumps.  Every time.
I remember, back when the song was new, putting it on a mix tape I made for my favorite “exotic dancer.”  (Hey, I was new in town.)  Boy, could she ever work this song.  Funny thing is that when she danced to it, I was usually grooving more on the song than her performance.
I bought several of his succeeding CDs after this one, and they were all pretty good.  But none ever approached the majesty of “Still Got the Blues.”
Mr. Moore?  Please allow me to apologize to you on behalf of the cretins that booed you out of Toledo.  They knew not what they did.  Safe on, my friend.  I’m guessing you were only called home because Stevie Ray needed someone to trade licks with him.
I bet they’ll be playing all night.
Posted by bluzdude at 7:32 PM

Great tune. I'm glad I stuck around past the 4:00 mark. You're right. Goosebumps. And I know nothing about music.

DG,
Yeah, it takes a while to build, but once it does... fireworks.

I was so sad the day he died, you would have thought I'd lost a family member. He is still with me, there---in my iPod, and I am so glad.

You have awesome taste in music, Bluz.

Cher,
My MP3 player is loaded with GM as well.

I'm sorry for your musical loss. At least it was in his sleep so he didn't suffer...

And are you watching this Pens game?!? It's a tad ridiculous from all the fighting. I wish the game would just be over with.

I can't believe he had a music career without going back to Toledo! They can make you and break you. They booed Elvis and then he got fat and died.

Cowboy, that was amazing. Maybe you'd like to put more of his music up. I would love that.

Cassie,
Yeah, it was a peaceful demise, considering how so many musicians go in bizarre fashion.

Oh, that game was a travesty. The Isles barely cared about the game... looked to me they were purely out for physical retribution. And NOT an auspicious start for little Maelie's hockey-watching life.

Bagger,
Toledoans don't have much patience for music they haven't already heard before. I thought it was a shabby thing to do, no matter the quality of the act. And I've sat through some TERRIBLE opening acts in my day. People don't realize that they aren't making anyone ELSE look bad by booing.

Judie,
You do realize that after you play that clip, options appear to play more clips that are similar, right? Explore! There's a lot of clips of GM out there, playing with all kinds of other dudes.

These last few hockey games are no longer sport but spectacle. May this turn around soon.

Mary Ann,
Between all the injuries and last night's fights/suspensions, the Pens will be hard pressed just to fill their bench.

Bad news for our Baby Birds. May these pitfalls and shitfalls end with an amazing comeback. Or come on. Or come up.