As I mentioned in “Comments” from the previous post last night, I heard from my juror friend, as he promised. 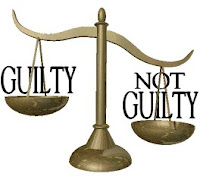 Again, I wish I could have kept my notes, but as I recall, the 1st Degree Assault charge required intent to do bodily harm.  That was the one charge I would have voted Not Guilty.  So basically, the jury found exactly the way I would have made the case, going into deliberations.

“Defendant will apparently get about 25 years.  Found out afterward that the defense lawyer tried to get her to take a plea deal to reduce the sentence by 7 years, but she wouldn’t do it.”

I asked when that deal was discussed; before the trial or afterwards.  (As yet, he hasn’t returned the email.)  Remember, the defense attorney asked me and Alternate #2 what we thought.  I said guilty, she was on the fence.  Maybe after talking to us, he realized that it might go badly for his client.

“The 3-year old (now 5) is doing well, being raised by his aunt, and is actually described as being very small and very sweet and kind.”

There goes the theory of the hulking 3-year old tossing the baby around like a sack of potatoes.

“The baby is not doing well.  Needs medication to prevent as many as 30 seizures a day, is fully blind, and operates at the level of a 1 or 2-month old (at 2 years).  Also, she nearly died again this past winter due to inability to regulate her body temperature.

The baby’s mother is missing and cannot be found.  She was a drug user as well.”

That explains why she wasn’t at the trial.  I thought at the time she’d want a front row seat.  So sad about the baby.  Poor kid never had a chance to have a normal life.

“The jury started out fairly divided, but soon moved toward the guilty verdicts you see above.  There was one holdout.  I believe she eventually just gave up.  She was never really eager to share her own thoughts or feelings or reasoning during the process.”

That would have bugged the hell out of me… a lone holdout that won’t discuss her reasoning.  That’s a cop-out and a failure to do one’s job as a jury.  The whole process is about talking out differences and coming to a united decision.

He didn’t say how long it took them to deliberate.  I asked, but as I said, he hasn’t responded as yet.

So that’s that.  A trial in the books, another person in the jail and one more tragic crime victim is struggling to survive.  Onward, we roll.

I promise the in my next post, I’ll be back to my customary level of mirth and whimsy.
Posted by bluzdude at 11:12 AM

You are absolutely right about the jury process of talking and reasoning out differences. That is real education.
This is not only heartbreaking but also ironic that you should experience this horror during a time of personal, family joy.
"Mirth and whimsy" come back. We gotta laugh or go insane.

Up next, pictures of my new 2nd cousin and a new Sammy story. There will be mirth.

I have thoroughly enjoyed yours posts. Thanks for keeping us updated. Since I'm a Law and Order junky and all.

Thanks, Dazee. It was a lot of fun to share the experience. And like I always say, what's the point of experiencing something if you can't blog about it?

I couldn't have sat through that trial without sobbing my eyes out every single day.

Jayne,
We had to kind of disconnect ourselves from imagining the horror of the day's events. Only way not to freak out...

I still would have had a hard time with that case. I hate crimes against kids so I would have said guilty and give her the chair.

Well, to me the facts in the case said she was guilty. But assault doesn't carry the death penalty so that wasn't on the table.

Who's taking care of that poor little baby? I believe in a woman's right to choose, and as an iv drug user, the woman should have never brought the child into the world only to end up like this. Her choice of babysitters was certainly very poor, as well. Maybe she will be picked up on drug charges and end up in prison as well.

Judie,
I don't know who's taking care of the baby now. I ran everything my juror friend told me and that wasn't in it. I'd have to assume it's got some kind of permanent bed at a hospital somewhere as a ward of the state.

What a tragic story, Bluz, on so many levels. This child will never be the same; never reach the potential of what could have been. It must have been gut-wrenching for you to be part of this for any length of time.

Cher,
Very true. It was tough to really think about all the implications.

May I put one of your photographs on my blog with a link back to your blog??

Of course, Judie! I'd be honored.

That poor baby. This story just makes me want to cry. And hit someone.

Yeah... no happy ending here, no matter what would have happened with the trial.

I HATE PEOPLE. AND THIS ISN'T EVEN MY HORMONES TALKING. YOU DON'T WANT TO HEAR WHAT THEY HAVE TO SAY. PEOPLE SUCK.

I was reading an article a few months back when I was at my emotional peak...a guy and his girlfriend, while high, DUCT TAPED their THREE YEAR OLD to a wall, then DUCT TAPED his SIPPY CUP juuuuuust out of his reach. MAKES ME SICK.

It really did. I vomited after reading that.

Cassie,
I knew this case was going to stir some emotions from the mommies. I mean, whoa... breaking out the Caps Lock and all...

Please try not to linger on it, and just focus on your own very lucky childrens.