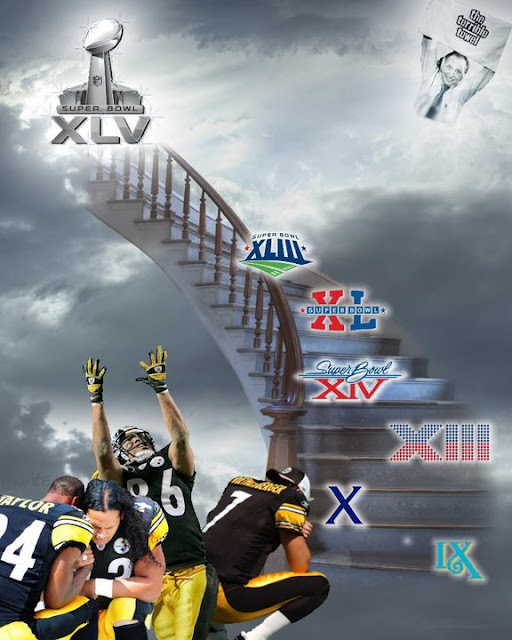 The Steelers Stairway to Seven
All week I’ve been getting coming across these great Steelers-related photoshops, so I’m going to run a few of them tonight, along with a mish-mash of other not necessarily football-related stuff.
Just for Shits and Giggles
I was emailing with my friend Bea again this week.  Last week, our email thread about old cartoons led to a full post.  This week’s was at least good enough for an Odd Bits item.  We were talking about taking training classes:
Bea: It’s not like I’m sitting up here saying, "Self, you should take a class today for S & G."  (Remember, we were at work, so we have to use this top secret, indecipherable code.)
bluz: I wonder where that term ever came from.  Does one really G, while S-ing, so much that it’s a common saying?
Bea: And now I’m going to be pondering that for the rest of the day.  I can’t say I ever remember G-ing, while doing the other.
bluz: Me neither.  Maybe G should stand for “grimace.”
Bea: Or “grunt.”
bluz: Perhaps a “guffaw,” if one is especially successful.
Bea: OMG – I can’t stop laughing.
bluz: There’s the “guffaws” right there.  Or giggles.  Better beware not to follow it up with its partner.
Bea: That would NOT be good… it’s a long train ride home.
bluz: A lonely one, as well.  That’s a good way to keep some elbow-room.
Bea: True, I’d definitely get a seat all to myself.
bluz: That’s usually my rule… never sit next to anyone that reeks of “deuce.”
Bea: Ewww.  Of course, that happens often on the city circulators, especially in bad weather.  The homeless go for a ride.  (Free downtown bus.)
bluz: I’d have to stand and try to breathe exclusively through an open air vent.
You know where this thread is going to end up, don’t you?
Such is the peril of emailing with me. 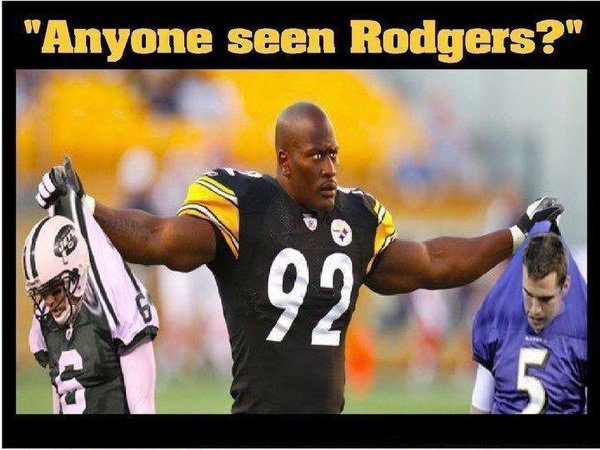 Ginny at That’s Church tweeted this picture, which her father sent to her.  I don’t know who made it, but they have mad photoshopping skillz.
5-Year Olds Pay Attention To Everything (but what you tell them to do)
My brother sent this email out to the family this week:
Sammy was sitting on my lap Monday night and we were watching the 2008 Steelers season highlights and the Super Bowl in particular.  When it came time for James Harrison’s interception return, he said, “Oh, this is the part where “naughty man” scores a touchdown!!  Of course I never knew he knew anything about James Harrison, but I asked him why he calls #92 “naughty man,” and he said it was “because he’s always getting in trouble.”  Classic 5-year old!
They really don’t miss much, do they?  It’s always interesting to see how little kids process the information around them. 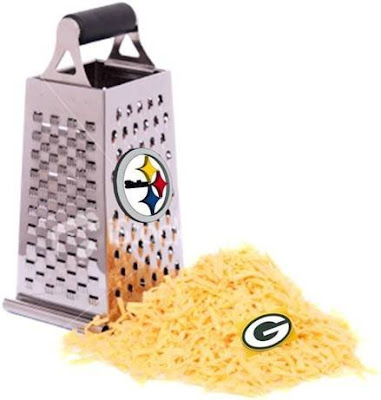 This one is up on the outside of my cube wall (along with the previous one)  I just hope I don’t get in trouble like James Harrison, and become Naughty Bluz.
The other funny thing is that on the night before, I was doing the same damn thing… watching the season DVDs of the last two Steelers Super Bowl seasons.  I never thought my brother and I were much alike, but I’m always being told differently.
Like today, I went up to buy my Super Bowl pool box and the Admin running it asked me if I was doing anything for the game.  I said I wasn’t, because when it’s any old Super Bowl, I don’t mind watching the game in a party atmosphere.  But when the Steelers are on, I want quiet!  I need to concentrate and focus on every single second of the game.
The Admin started laughing, and said, “I asked your brother that yesterday and he said the exact same thing!”
Then later when she brought the squares by, I was disturbed to note that my numbers were 8 for the Steelers and 1 for the Packers.  And then I noticed that my brother had a square that was the exact inverse: 1 for the Steelers and 8 for the Packers.  Freaky! 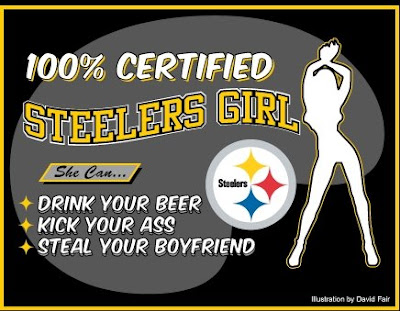 This is why we love our Steeler Girls!
Email Classic
I remember this email from very early on when I first got a computer and thought it was one of the funniest bits ever.  Then I promptly lost it.  I was delighted to receive an abbreviated version of it this week and thought I’d share.
This is a perfect example of how men and women are just plain wired differently:
Her Diary:
Tonight, I thought my husband was acting weird.  We had made plans to meet at a nice restaurant for dinner.  I was shopping with my friends all day long, so I thought he was upset at the fact that I was a bit late, although he made no comment on it.  Conversation wasn’t flowing, so I suggested that we go somewhere quiet so we could talk.  He agreed, but he didn’t say much.  I asked him what was wrong.  He said “nothing,” I asked him if it was my fault that he was upset.  He said he wasn’t upset, that it had nothing to do with me and not to worry about it.
On the way home, I told him that I loved him.  He smiled slightly and kept driving.  I can’t explain his behavior.  I don’t know why he didn’t say ‘I love you too.’
When we got home, I felt as if I had lost him completely, as if he wanted nothing more to do with me any more.  He just sat there quietly and watched TV.  He continued to seem distant and absent.  Finally, with silence all around us, I decided to go to bed.  About 15 minutes later, he came to bed.  To my surprise, he responded to my caress and we made love.  But I still felt that he was distracted and his thoughts were somewhere else.  He fell asleep – I cried.  I don’t know what to do.  I’m almost sure that his thoughts are with someone else.  My life is a disaster.
His Diary:
Work sucked.  Pretty tired.  Got laid though.
Yes, yes, I know… raging generalization there.  But you know there’s a grain of truth, too.  Sometimes I wonder how we ever co-exist under the same roof.
I’ll check in again this weekend.  Until then, I’ll be looking for more frivolity and mojo regarding the Real "America’s Team": 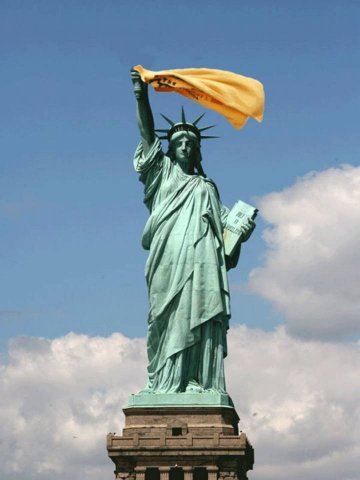 You do realize that I had to google the origin of "shits and giggles"...I'm still laughing.

Love the photoshops. Women of Steeler Nation are a unique breed. Be careful of the stereotypes when you've already acknowledged that certain ladies could kick your ass. :-)

Claire told me today, "You're killing me, Smalls." To which I responded with a laugh. However, it makes me wonder - what is Matt teaching my kids in my absence?

Bea,
And you're holding out? Like I have time to Google word history... (OK, I totally do, but don't want to.)

DG,
There are some very talented Burghers out there, I tell ya.

Cassie,
What the hell does "smalls," mean? Although I'd have to say, a woman who is stuffed with child, such as yourself, must love being referred to as a "small" anything.

I wish to God that when my nephew was young(er) I would have started writing down some of the shit he said. Used to slay me. Of course I can't remember a single thing, now.

Those pictures are flipping classic.

Trash,
Like I told DG, there is some major talent among the photoshopping Pittsburghers. I'm constantly amazed at what is produced in honor of our proud ball clubs. Hell, I've been using their work as my blog header since day one here.

The one downside if the Steelers win on Sunday... I'll have to look for a new blog header pic. Luckily, I bet I won't have to wait long.

Loved that husband and wife bit, that was pretty hilarious. Classic.

Raven,
I'm not usually one to perpetuate stereotypes but in my experience, that bit cuts pretty close to the bone. Every girl I've ever been in a relationship with has been prone to "over-thinking" like that. Makes for quite an adventure.

that phrase is from the movie "The Sandlot." It's been heard since I was in high school, and Matt will say it often to me, which of course - rubs off on the kids.

I love the shit Claire says. Even Luca now. Claire will say to me, "Can you help me? This is to hard for little Claires."

Cassie,
I remember that movie, but not so much that I remember any dialogue.

The first time my nephew Daniel turned his parents words around on them, he said, "Don't tell ME no..." Which was fitting...

The Guy never comments on anything (including MY blog), but I do, so I'm here to tell you that this post got two thumbs up from him.

Though he was teasing me today in the grocery store, threatening to pull for the Packers, and I almost took him out in the Valentine's candy aisle. You would've been proud.

Mrs. Bachelor Girl,
Obviously, your Guy is a man of refinement and exquisite taste. But I didn't have to tell YOU that, did I?

Women tend to overthink? Hmm... Have you given any consideration to the idea that men may underthink? ;-)

I see a hell of a book idea here: Alternating diary entries... Better hop on it now, Bluz, before I beat you to it.

Sherry,
Can't argue that point. I'm sure that the truth lies somewhere in the middle.

Maybe we men just have a lower threshold for contentment.