It occurred to me that with my last post, I lost a good chance to post an actual clip of The Loaf in action.  I suppose I could append something onto it now, but that horse is pretty much out of the barn by now.  So hear I am with this quickie post.

The issue now is to decide which clip to post.  You’d think it would be a no brainer and I’d post clips of either “Bat Out of Hell”, or “Two Out of Three Ain’t Bad,” because I spent considerable time talking about both.  But chances are, you already know Two Out of Three, so there’s little point in using that one.  Bat Out of Hell would be great, but the thing is, that song comes in at over 9 minutes.  I’m not going to ask you to hang around here that long.
So I decided to go a different way and post a song from Meat’s second album.
Way back in the early 80s, I read that Meat Loaf was going to be on one of those late-night music shows, the Midnight Special, I think.  I was just getting into the Bat Out of Hell album, so I made sure to stay up late to watch.  Remember, at this time, there was no MTV or other music videos available.  I had no sense of how this guy performed.
So I stayed up, all set to see me some Paradise, or some Bat, or some Two out of Three… But what I got was a series of music videos from his forthcoming album, Dead Ringer.  What a let down… I wasn’t in the mood to see songs I’d never heard before. 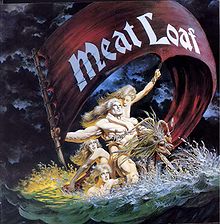 This is one of the albums I had him sign in Boston.
Let me get this straight though… I love that album now.  I just didn’t know it at the time. Little did I know that this was practically an all-star album.  Featured players were Davey Johnstone (from Elton John’s band) on guitar, Roy Bittan and Max Weinberg (from the E-Street Band) on piano and drums, Liberty DeVito (Billy Joel’s band) also on drums, Nicky Hopkins (Beatles side-man) on piano, and one more special guest vocalist.
One video really jumped out at me.  It was the title track, “Dead Ringer for Love.”  It appeared to be an attempt to recreate the vibe from “Paradise by the Dashboard Lights.”
It was staged as a big bar-room duet, jock-boy versus leather chick, but the twist was that the female singer was Cher.  Freakin’ Cher!
Now, this was back when Cher was still pretty cool in a renegade sort of way, and not the surgically-enhanced, carp-mouthed mutant she’s become in recent years.  It would be another 6 years before she’d star in Moonstruck.
The two of them traded verses like they were having a ball, making perfect foils for each other.
Welcome back to 1981
Couple of quick notes on the video:
* I wonder how much time that Cher and The Loaf actually spent on the same stage.  There are only a couple shots where they’re both in the same picture.  The rest of the time, the shots are framed so that they could have been singing to a posse of stagehands and grips.
* How young do Meat’s backup singers look?  It looks like he’s a 30-year old ex-lineman fronting the JV Football team.  No way their voices would be low enough to pull off the "Dead ringer" refrain at the end.  And Cher’s chick party looks like it’s filled with extras from the street scenes of “Pretty Woman.”
* Loved the flash-change from roadie jerseys to frilly tuxedo shirt.  And he’s got the red hanky going!  He doesn’t use that so much any more, but at the time, he always had the red hanky to wave.  When he and Cher walk out of the place at the end, I swore he was going to wipe off the bar with it.
* I forgot how cheesy those early music videos could be.  Like I said, this was pre-MTV, and even those in the first years of MTV were pretty primitive.  I suppose these were filmed for European audiences, because there was no other outlet for them here.
* I never liked the “rock n roll and brew” refrain.  Who calls it ‘brew’ on a regular basis?  But I guess it’s easier to rhyme stuff with ‘brew’ than ‘beer’ or ‘ale’ or ‘Budweiser.’
OK, I tried to make this short, and I suppose it still qualifies, by my standards, anyway.  Really, I thought it was going to go a paragraph or two, tops.
I’m not exactly a Dead Ringer for brevity…
Posted by bluzdude at 6:35 PM

Will have to come later to watch the video b/c I've got my jams going... BUT... see? I am making an effort to stop by more!
Also, I LOVED you description of current-day Cher. Really, what IS that? :D

Miley,
I appreciate the effort! And srsly... check out the stories I emailed you.

I love how cheesy the videos are. They're still horrible today, so really, I prefer the lameness.

Plus, if you're in a bad mood or sad, an old video can really cheer someone up. I mean, youtube any Eddie Murphy video and BLAM! Fabulous mood.

Or maybe in a bad mood once more because you peed yourself from laughing so hard...

Cassie,
It's funny how those cheesy video from the early MTV years were so freakin' cool at the time! Not that you'd remember, but I was there at the beginning of MTV and it changed everything. Even dopey ones like this were a big deal. There was no other way to see rock stars in action, unless they played your town, or lip-synched on some talk show. (Or played SNL.)

Cher will always be awesome. She gets a complete pass from me for everything. Also, I love Bat Out of Hell.

Vange,
What can I say... you have exquisite taste.

Poor Cher! I think she suffers from that disease that makes one become younger every year, sort of like Benjamin Button. Her prognosis is a little different, though--one day everything that has been shored up suddenly collapses!

Cher would still look spectacular, if only she hadn't blown her lips up like mattress cushions.

I remember the very DAY I discovered Cher. Changed my life forever.

Yes, as a matter of fact, I AM a reincarnated drag queen.

Mrs. Bachelor Girl
You’re probably too young to remember the TV shows she used to have… first, the Sonny & Cher Show, then one on her own. Used to watch them every week. She used to come out in the most wild-ass costumes…

I've always thought Cher was hot - voice and body. I think your earlier description of Meat Loaf's music and singing style as rock opera is right on. I'm not very familiar with his non-mainstream stuff, but I can definitely see the appeal. And, I LOVED him in Rocky Horror.

I always liked Cher. I just wish she would have left her face the hell alone.