This is a continuation of the story I started in the last few posts.  If you’re finding this first, you should start at the beginning by either scrolling down from the home page or clicking here for Part 1, click here for Part 2 and click here for Part 3.
Once I put Jackie in my rear view mirror, I stayed pretty clear of the strip clubs.  Their purpose in my life was no longer relevant.  They proved to be a peaceful oasis when I was new in town didn’t know anyone.  Sometimes one just needs a little human interaction, even if it IS greased by one-dollar bills.  But once I met more people and widened my network, I found other ways to interact.
I only ever rubbed up against the strip club atmosphere a handful of times since then.  The first of which was my bachelor party.  Good Lord, that was a doozy, and it wasn’t even in a strip club.
By that time, I was out of the record stores and into our home office.  My esteemed mentor, Vinnie, not only knew every band, their manager and every record executive on the east coast, he also had tentacles into the nightclub business.  So for my bachelor party, he used his contacts to arrange to use the basement of a regular restaurant and fill it with a half-dozen exotic dancers.  For me, this was a mixed blessing.
On one hand… Free Range Strippers!  What’s not to like?  All the guys from the office came… I only wish I could have gotten my buddies out from Toledo.  But on the down side, I had to be the center of attention… Stripper attention.  I didn’t like that so much.
I would have been much happier to just sit on the side and watch my friends get “entertained.”  But every 10 freakin’ minutes, some chick in a teddy would drag my ass back to the chair in the center of the stage and proceed to very sexily ram my nose into her sternum.  I don’t know why they do this, other than for revenge.  It’s totally unsexy.  All you can do is hope you don’t sneeze on her jugs.
“Hey naby, can you leh go bacca mah ‘ead?  Eh can’t breedth…”
Future-Ex was actually fine with my having this party.  Obviously she trusted me to maintain the high level of character and principle, with which I have always carried myself.  Also, she sent her 23-year old son and her brother-in-law with me.  Have you ever heard the phrase, “Trust but verify?”  So there were no shenanigans, and I eventually regained my sense of smell.
Late in our marriage, when I was woefully under-employed, I was looking for a little extra income and saw a want ad for a DJ at a local strip club.  Not only had I worked as a nightclub DJ in the past, I figured my experiences in The Sewer and the other club in Schenectady would prove useful, so I asked Future-Ex for permission to go down and audition.  I couldn’t believe it when she said I could.  I think she just wanted to get me out of the house more often, seriously. 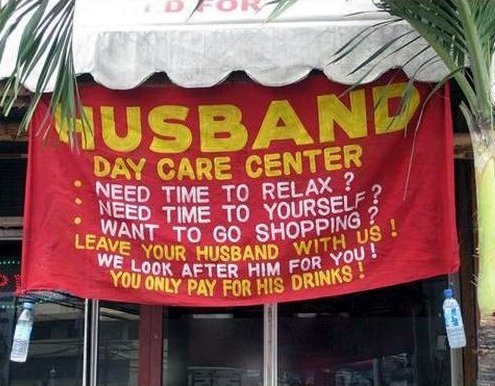 So I went down and tried out, by DJ-ing for about 2 hours one evening.  I did OK… nothing earth shattering.  I always hated doing all the yapping on-mike.  My DJ style leaned toward letting the music do the talking but in this realm, they need more of a Master of Ceremonies.  Still, I got though it without embarrassing myself.  Most of the dancers had specific ideas of what I should play for them, so I didn’t really get to reach into my bag of music-selection tricks.  Best part was when one of the dancers came up and gave me a piece of her tips.  Apparently, the DJ gets a taste of the profits.
But it was easy come-easy go… Five minutes after she gave me the couple bucks, she sidled up to me to dance for tips.  I ended up having to give it right back to her.  Some racket…  Anyway, I didn’t get the job.  It would have been fun, and no doubt a good source for blog fodder.
Once I moved to Baltimore, I stayed out of the clubs completely, mainly because I had my brother and sister here so I not only had them but I had access to their friends as well.  It was so nice to be back around family.
But one time, around 2002, I found myself on a business trip to Toronto.  I was only up there with my boss and he wasn’t a particularly social type.  So a quick scan in through the phone book after dinner told me that there was a strip club just down the street from my hotel.  I’d always heard about the stellar strip clubs in Canada, (and this was real Canada, not just Windsor,) so I felt obligated to check on out for myself.
First off, the girls there were dazzling, as I’d expected.  They were from everywhere… it was a veritable United Nations of tatas.  Nice place, pretty girls, exotic accents… seemed like it should have been perfect.
But this is where I started bumping up against what strip clubs have become since the early 90s.  They no longer come by and dance for your singles.  The only objective now is to get you back to the lap dance room and relieve you of a bunch of dollars at a time.  It was pretty much impossible to just sit and chill and watch the dancing on stage.  There was a literal procession of exotic girls coming up to my table with the solitary goal of selling me lap dances.  At this club, I believe the going rate was like $40 (US) after you pay a $20 room rental fee.   For that, you got 2 songs worth of writhing around on or about your lap.  And you had to be sure to put a wrap on things after the two songs… If you lingered and another song started, they dinged you for an additional $40.  But on the bright side, they were naked.  (Canada rocks!)
Anyway, for such a personal activity, the whole thing stuck me as highly impersonal.  You know… all sizzle but no heat.  And I didn’t like being put in the position to have to continually say no to all the girls.  I’m sure they play on that; that guys don’t want to disappoint the hot chicks.
I liked the humble little clubs from my past better, I think.  Or maybe I had just outgrown the whole operation.  Go figure.
The last time I was at a club shouldn’t even count.  Back in the mid-2000s or so, I was back in Toledo visiting my buddies and one of them had been picking up part time work as a bouncer at a strip club.  He had to go in one afternoon so he could pick up his paycheck so I went with him.  I swear I wasn’t in there 5 minutes and this chick is after me for a lap dance.  I was like, “Cool the jets, sister, I’m just having a beer and waiting on that gorilla over there that you have guarding the door.”
My buddy has a lot of stories to tell about that place, but it’s his place to tell them.  He definitely had his hands full, I can tell you that.  But with that, I’m out.  I don’t go anywhere more “exotic” than Hooters and even that’s just for the big fish sandwiches.
The older you get, the more you find that different things excite you now than when you were 25.
Perhaps it’s my turn to do the stripping…
I wonder if my high school Spanish would work like that…
Posted by bluzdude at 7:23 PM