First of all, I have to wish my 6-year old nephew Sammy a most happy birthday!  (Which was yesterday.)
Sam is a real pisser.  I wrote about this before the last Super Bowl in February, but Sam was watching the DVD of the Steelers Super Bowl XLIII win over the Cardinals with his dad.  All season long, Steelers linebacker had been getting fined by the league for laying out hard hits.  When it came to the part where Harrison was about to run that interception back for a score, he said, “Oh, is this the part where Naughty Man scores a touchdown?”
My brother asked him why he called him “Naughty Man.”  Sam said, “Because he’s always getting in trouble.”
It always amazes me what kids pick up, when you think they’re not paying attention.  Anyway, for his birthday this year, Sam asked my parents for a Naughty Man jersey.  If only they could have gotten the back printed with that particular name… 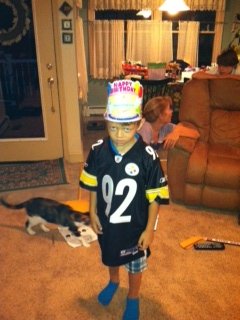 Sammy in his Naughty Man jersey, acting the part.
Since he was feelin’ the jerseys this year, I figured I’d get him a Penguins jersey.  I know he watches the games with his dad.  I’ll come over and he’ll ask me about a particular play from weeks earlier.  Again, it amazes me what he remembers.
Anyway, I had a devil of a time finding a small enough jersey.  Since he had his brother’s hand-me-down Sid jersey in black, I wanted to find him a Penguins white jersey.  But every freakin’ website I checked only had kids jerseys in L/XL.  I definitely needed the S/M.  Finally, I found a Geno Malkin jersey in black, so I had to take what I could get.  If I had only figured out what to get him earlier, I might have imposed on one of my Pittsburgh blog bretheren (or sisteren) to find me something local, but I was on short time.
Nevertheless, the jersey went over well. 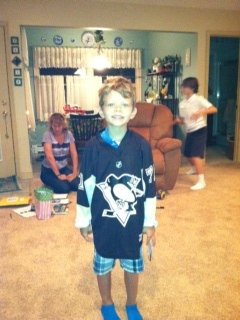 I bet that birthday cake had “big taste.”  (Sorry, that’s a reference that only hardcore Pens fans will get.)
Search for Reality
I had a strange Google search bring someone here this week.  Somebody searched on: “Rainbow unicorn with Chuck Norris beard.”
I have no idea what to make of that, or what I’ve ever posted that would draw the hit.  Must be the power of Chuck.  After all, Chuck Norris once shot down a German fighter plane by cocking his finger and shouting “Bang.”
Free Range Morons
I went to my last Orioles game of the year on Monday, with Sitcom Kelly as my wingman.  Right off the bat, the evening proved memorable when our subway train (which runs above ground for half the trip) passed right by a big warehouse fire that I could smell right when I left my apartment. 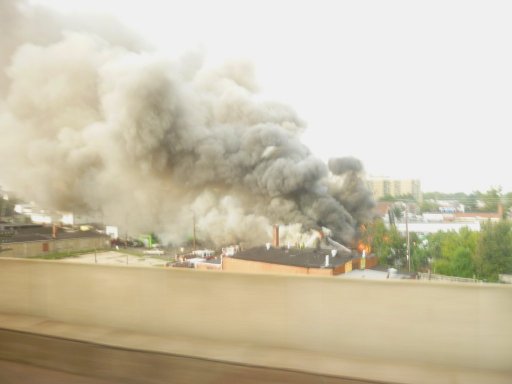 Foreshadowing of the Red Sox fortunes that week.  Ha!
This trip was Sitcom Kelly’s idea, so she was the one to buy the tickets.  After much back and forth, she settled on seats under the middle deck, in the left field corner.  With the Red Sox in town, she was sure the place would be packed, so we didn’t try for anything better.  This was our view: 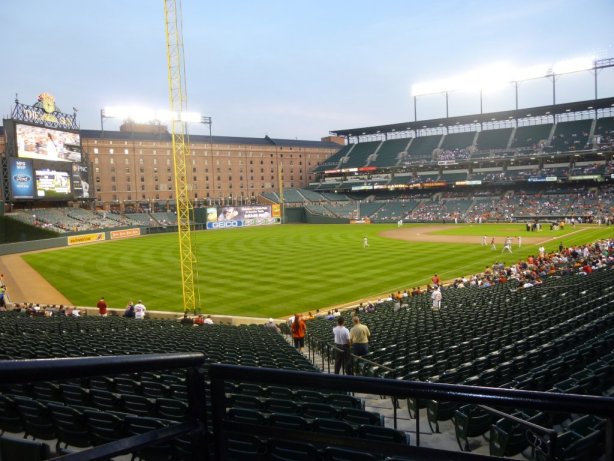 As you can see, we could have traded up.
That shot wasn’t taken during batting practice… this was about 5 minutes before the first pitch.  We decided to wait out the first inning and then go move down to the outfield wall.  We ended up in the 2nd row, right by the foul pole. 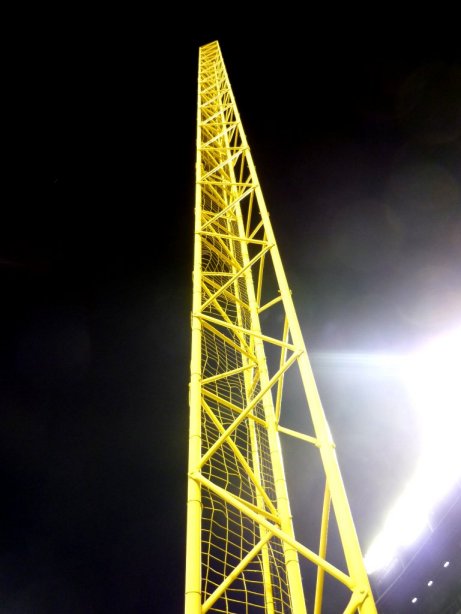 Notice all the dents in the fencing up on the pole.  Must be from a lot of batting practice balls… I rarely see balls hit the foul pole during a game.
Anyway, nothing much happened out our way until the late innings when some young punk ran onto the field.  He hopped over the wall from up the 3rd base line in the infield, then ran through the outfield before coming to rest on the side wall, right in front of us. 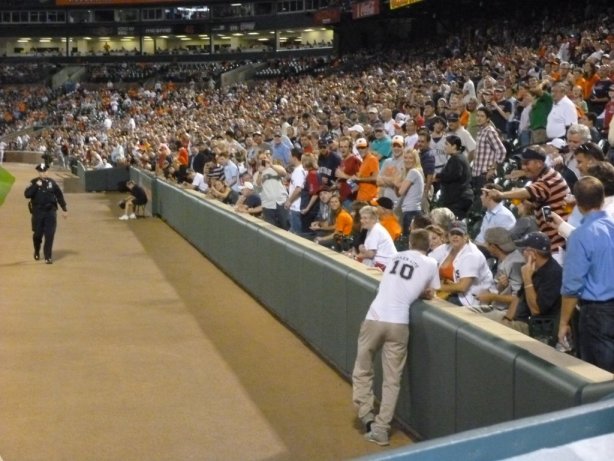 "Oh Mama I'm in fear for my life from the long arm of The Law... thumpthump... thumpthump..."
You can see the fans on the side giving him the business.  I know that all the Red Sox fans around us were yelling “Tase him!  Tase him!”
Then right as the cops strode up to him, he took off again through the outfield. 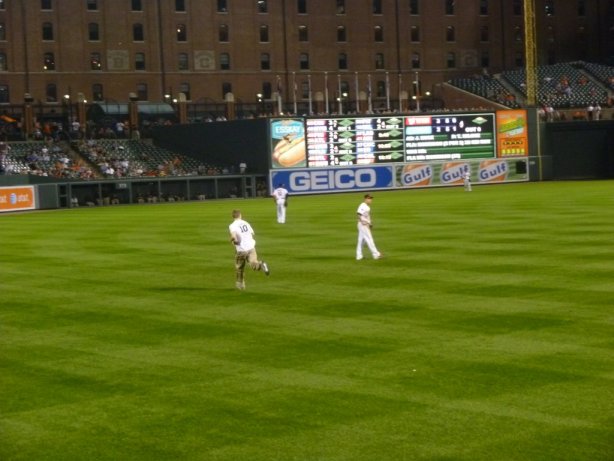 He ran by the outfielders but they moseyed away looking bored.
He ran straight to where the door is to the bullpens, through the outfield wall.  Just as he got to the door, it swung open and a cop stepped out.  Numbnut just put his hands out and let himself get cuffed.
What I couldn’t understand is that knowing that the TV broadcast always cuts away when someone runs on the field, then why in the hell would anyone do that?  A dare?  A bet with one’s friends?
How much money is enough to make it worth spending a night in Baltimore’s Central Booking facility?  There would have to be a lot of zeros in there for me, let me tell you.  And I could just see the conversation too…
Punk: So what are you in here for?
Big Scary Dude: I burned down a house holding a state’s witness and her family.
Bigger Scary Dude: I poured sulfuric acid on a playground slide.
Biggest Scary Dude: I skull-fucked a nun.  What did YOU do?
Punk: I ran across the field at an Orioles game.
Anyway, when I got home, I was curious about how much padding was going to be in the official attendance figures.  I was guessing that there was about 13,000 butts in the seats.  So I looked up the box score online and when I did, I saw a thumbnail picture beside it.  The shot was of the punk running on the field so I embiggened it and found a surprise. 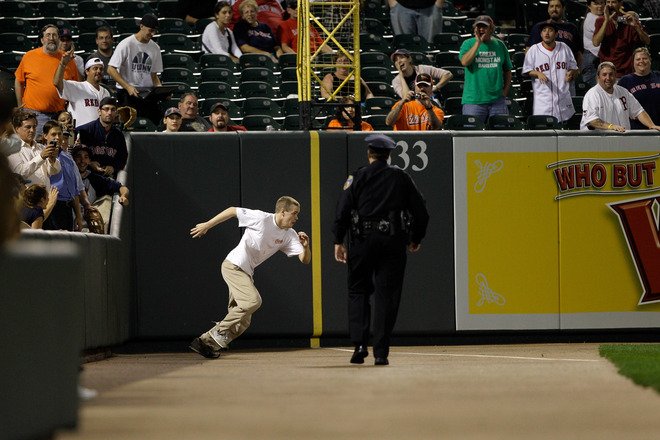 Get a load of the doofus in orange taking pictures.
(Photo by Getty Images)
It’s also funny because you can see the Sox fans giving the guy shit.  And even better, there was Sitcom Kelly, effectively “Wilsoned” behind the foul pole.  I couldn’t have planned that shit any better.  Once again, I’ve managed to Forrest Gump my way into another random crowd shot.
The Mojo Boogie
While I didn’t post my usual Game Mojo information prior to last Sunday night’s Steelers game, (I didn’t want to interfere with my Stripper Tales), that doesn’t mean I wasn’t engaging in my mojo activities.  This was the gear I went with for the game: 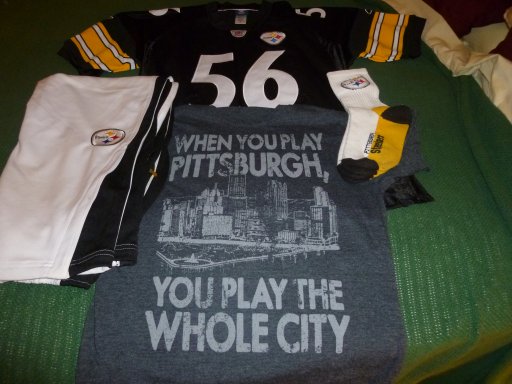 Black Woodley jersey with white Steelers sweatpants and Steelers socks.  T-shirt features a famous ‘Burgh-related quote from Howard Cosell.
I usually go with a white jersey when the Steelers wear white, but I wasn’t feeling the history on this one.  My gut said to go with the Woodley so I did.  I also left the Steelers Gnome in place.  The result was a narrow, last second win over a team that the Steelers should have crushed.  So now I have to read the tea leaves.
Was my jersey and/or gnome what sandbagged our chances?  Or were they the catalyst that pulled out the win in the end?
I’m leaning toward pulling the gnome and putting him back on my desk.  I’m not ready to give up on the Woodley jersey just yet.
This coming Sunday, I’m going to watch the game with my brother and Naughty Boy over at their house, so I’ll have to come up with some gear suitable for alternate house viewing.  Wish me luck.
And lastly, as a public service: How You Tell When Bananas Go Bad 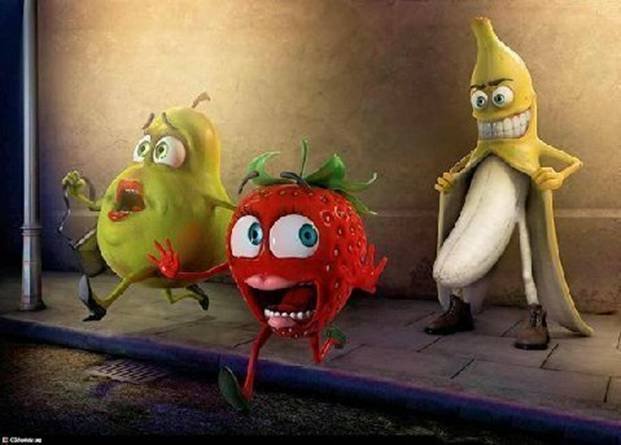 Director’s DVD Commentary:
Regarding the caption under Sammy’s picture in the Malkin jersey: after winning the Stanley Cup, Malkin (who is Russian and still very new to speaking English) was asked how that victory champagne tasted.  He answered, “It has big taste.”  I love that line.
Regarding the Big Scary Dude crimes: Two of those are actual Baltimore City crimes.  One, I made up.  You guess.
Posted by bluzdude at 8:29 PM

FYI, that's Geno talking to me about my AWESOME baking.

For those who don't have the slightest idea:

I want you to write an entire post as if you're Malkin. That would be fantastic.

Oh, and if you ever need me to pick up some of the local culture, you know how to find me :)

Cassie,
Well, I knew YOU would get the Malkin line...

You know, it only dawned on me as I was writing this post that I could have asked you to find me a white kid-size jersey... but still, there wouldn't have been enough time between the point that I thought of what to get Sammy, and his birthday. And I certainly wouldn't have wanted to make you feel like you had to rush out on an errand on my behalf. And I was seriously surprised that the small jersey wasn't readily available online.

Why do people -- guys, probably drunk -- run across baseball fields? I don't get that? Does that happen in other sports? Football? GOLF??

Red Pen Mama,
I’d say it happens most frequently in baseball, because it’s unlikely that the trespasser will get hit. In football, you take your life in your hands because there are big dudes lurking out there that will hurt you.

Case in point, the Naughty Man himself. He became one of my all time favorite players one day, before he was even a starter, when some drunk Browns fan ran out onto the field. Harrison came up behind him, picked him up and body-slammed him to the ground, then held him there until security showed up. It was a beautiful thing. I’m sure you’ve seen the pictures, or YouTube video. I loved it.

Why people do it? I have no idea at all. I see practically zero up-side. You get no TV time, you DO get time in jail and there is a distinct possibility of getting busted upside the head, thrown on your ass or tased. It’s pointless.

In hockey, it’s pretty unheard of… not only is it tough to get over the glass and onto the ice, the rough guys out there carry big sticks, can get around easily on the ice and are well versed in fighting. Spectators… not so much.

The big question is why it doesn’t happen in golf? You’d think there would be people all over the course because it’s not like there’s walls there…

Some drunk runs out on the fairway and starts dancing around. A pro up by the tee box, maybe someone like John Daly, says, “I got this,” and blasts a drive that smokes the drunk right in the melon. Just do it!

If you're gonna run out on the field, then for God's sake, at least streak. Don't be lame.

Mrs. Bachelor Girl,
I don't think anyone will streak ever again, now that they've invented tasers. No one wants Fried Willie.