I meant to do a serious post tonight, and I was due, especially after the whimsical nature of the last post.  But I’m doing this one instead.  Hey, you get what you pay for.
I took today off, just to burn a floating vacation day before I lose it.  I decided to run some errands, while everyone else was at work or school.  What I learned is that there are still a lot of dipshits running around during the day, but at least not as many as during nights or weekends.  I forgot how much easier it is to go about your business during the day on a weekday.
There was a time when that was my default free time; back when I worked retail and my day (singular) off was a Tuesday or something.  I always felt like I was playing hooky, out running around while all my friends and everyone else was hard at work.  It kinda bummed me out back then.  But I’m over that now.  I enjoy not having to run with the masses, just to get some shit done.
So now I’m going to try to remember all the stuff that occurred to me today and thought “Hey, this would make a good topic to write about,” as I was out and about.
First stop: hair cut.  I wanted to get my summer cut on before I head for Florida to visit my folks in a couple weeks.  There were only 2 other people in the shop when I came in, so I got to sit right down.  Funny thing was that some dude came in about 30 seconds after I sat down, saying he wanted a cut from the woman that was about to work on me. They haggled over how long he would have to wait.  He decided he’d come back in 10 minutes.  Putz.
I wanted to stand up in the chair and go, “Dude!  Look at me!  This won’t take but 5 minutes.  She’s gonna shear me like a sheep and send me on my way.  Now sit down and shut up.”
In all fairness, it took 6 minutes, but she spent a minute of that time answering a phone call.  Then I was on to the gas station.  I have a BP gas card that gets me a 5-cent discount so I was pretty excited about that… right up until I later rolled by a BP in another part of town, whose posted price was already a penny lower than what I just paid.  I blame Obama.  (Everyone else does…)
Next, I went up the road to my favorite sports bar, Jilly’s.  That’s where I go to watch Steelers games when they’re not on local TV.  I’ve been in their “Mug Club” for the last 2 years and it was time to renew, so while I was in the neighborhood, I figured I’d take care of it.
The cool part was that they had new mugs.  I got to pick whether I wanted a brown one or another blue one, and then take my old mug home. 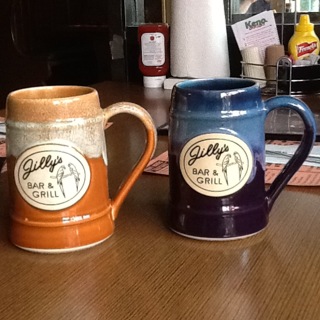 My old one looks a lot like the blue one pictured, so I went with the brown.  The blue is too close to purple, which is the Ratbirds’ color.  This homey don’t do purple.
Now I just wonder if the new mugs are the same size as the old ones.  I should have asked when I was there.  Part of the deal is that these were 20-oz mugs, which were filled for the price of a pint.  I guess I’ll find out this fall.
Finally, it was time for lunch, so I hit my favorite Wendy’s.  I had just been there on Saturday but I figured I might as well strike while the iron was hot.
I got a little annoyed when I was coming out of the parking lot.  There was small line of cars waiting to get onto the main road.  I was coming in perpendicular to the line, so I was waiting my turn.  But them some lady in a big SUV eased up to the back of the line.  I inched up a bit because hey, I was there first.  As other cars continued to line up behind her, I figured I’d better nose out a little further, lest I get stuck behind all the rest of them too.  (The lot empties out onto a major roadway with no light, so sometimes it’s a good wait for a chance to pull out.
Finally a couple cars moved and Mrs. SUV hesitated a second, so I shot out into the line.  I could hear her laying on the horn, but screw her.  She knew I was already there before she ever rolled up.  It always cracks me up when I pull what might be considered to be a “dick move,” because I know that they can see the Darwinfish and Flying Spaghetti Monster emblems on the back of my car.  They probably figure, “Ah, no wonder, that’s a godless heathen up there.”
I figure that should give me license to do whatever I want.  The offended people behind me will just assume I’m going to get my comeuppance in the afterlife.  Meanwhile, I’m rolling down the road with my window open and my tunes going.
I don’t have a good enough stereo system to really shake the block, like some other drivers do, but it’s good enough for me.  But I do try to leave an impression with passers by.   And I want that impression to be, “Damn, that old motherfucker still rocks!”
My primary mission of the day was to go to WalMart and return a pair of earphones I got last weekend.  The earphones to me MP3 Player were starting to short out on one side, so I needed a replacement.  I usually get these cheap Phillips earphones that wrap around the top of the ear (because otherwise, I’m always pulling them off accidentally) but with the speakers that do not go inside the ear (like “Earbuds” do).
Unfortunately they were right out of those, so I figured I’d upgrade and get this Sony pair that did have the “earbud.”  Big mistake.  Not only did I not like the sensation of the ends going into the ear, the wrap-around part squeezed the shit out of my ears.  I wore them once on Monday and within 20 minutes, I couldn’t wait to get them off.  And to boot, they sounded terrible, like listening to a 1960s-era transistor radio speaker.  The sound was all tinny and thin.  That won’t do when trying to rock the AC/DC.
So I took them back without problem, but they still didn’t have the kind I wanted.  So I picked up the Blu-ray of the new Mission Impossible movie, a few groceries, and went on my way.
Next on the agenda was to try to find some new sneakers.  I went up to the big DSW shoe warehouse store, figuring I’d find something there.  Wrong.
One thing I learned today is that men really get boned when it comes to shoes.  This place is as big as a freakin’ bowling alley, and all but 5 aisles are devoted to women’s shoes.  For men they had 2 aisles of sneaks, 2 aisles of casual shoes and sandals and a single row of dress shoes.  (There were probably 20+ aisles of women’s shoes.)
They only had a few styles that weren’t butt-ugly and garish, or made of mesh (which I don’t want because I need to keep my feet dry while tromping to and from work in any weather).  All I wanted was a simple pair of comfy size-12 white sneaks.  The few they had either weren’t in my size, weren’t sufficiently padded, or pinched the tops of my toes when I walked.  (I have to be careful with the fit because my feet are so likely to get hives from pressure points.)
The DSW didn’t have jack so I went next door to the Burlington Coat Factory.  They had even less than jack.  One more store down was a Best Buy.  I figured I’d take another stab at some earphones but they didn’t have them either.  All they had were either the big, padded things, or the goddamned earbuds.
Almost ready to admit defeat, I finally I tried Target on my way home and they had them.  Glory be!  Of course, they also had the Mission Impossible blu-ray for $2 less than I paid at Wally’s. 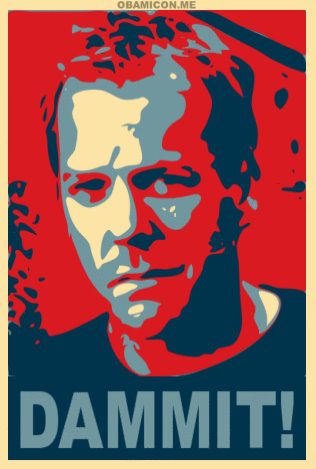 I miss "24."
I tried looking for shoes there, but they also had one measly half-row of men’s sneakers, amid a huge section of women’s shoes.  Perhaps it’s all a backlash driven by women, who now seek to keep men barefoot.
Oh well, life goes on.  All in all, it was a good outing.  I earned my merit badge in Getting Shit Done.  Now it’s time to relax.  Life is good, even with beat up sneaks.
Posted by bluzdude at 4:57 PM