With another baseball season upon us, I decided to go see the Orioles play today.  I like going to early-season games before it gets too hot, and what better day for a heathen to take in a game than Easter?  I went alone; Pinky was working and Sitcom Kelly was occupied with her family’s Easter dinner.  All the more baseball for me!  It was a beautiful sunny day, perfect for baseball.
With this year’s 20th anniversary of the opening of Camden Yards, they had an article in the paper this week listing the 10 most memorable events in the stadium’s history.  They included Cal Ripken breaking the Lou Gehrig consecutive game record, Ken Griffey Jr hitting the right field Warehouse during the Home Run Derby before the 1993 All Star Game, Eddie Murray’s 500th homer, the day Cal Ripken ended his streak, and various brawls, skirmishes and accidents.  But it turned out I, a merely casual fan of the O’s, actually attended two of the games listed.  (OK, one was listed as “Honorable Mention.)
Memorable Event #10 was opening day in 2003.  I’d gotten tickets by accident… at the time, my company routinely bought season tickets for the Orioles, plus extra seats for random noteworthy games.  Opening Day in Baltimore is always a big deal.  Anyway, a buddy of mine scored 2 tickets and asked me that morning if I wanted to go.
Of course I wanted to go… the alternative was just another ordinary day at work.  So I got permission from the boss and off we went.  (This is where it pays off that the park is a 15-minute walk from my office.)  The thing was, I wasn’t really dressed for it.  I was wearing a button-down shirt with my dress slacks, and a simple leather jacket.  That year, Opening Day was on March 31st.
So we took our seats in the temporary bleachers they put up on the right field flag court every Opening Day (and I think for the playoffs, but it’s been so long since they’ve made the playoffs, I can’t be sure.)
Round about the 2nd inning, it starts to snow… HARD.  It was snow squall that was coming down like crazy and blowing in circles around the park.  Every time a gust would come through and swirl the snow through the stands, everyone would cheer.  It was bizarre.  You don’t expect that at a baseball game. 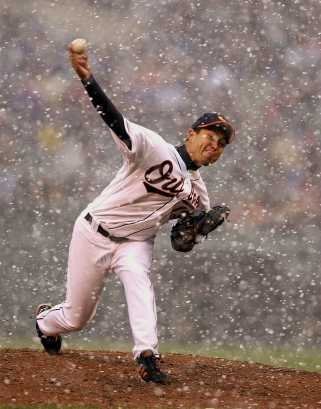 Pitching through the snow.
At one point, during the peak of the squall, someone hit a fly ball to right field.  Jay Gibbons, the right fielder, had no idea where it went.  The ball landed with a thud but he still couldn’t find it on the field. 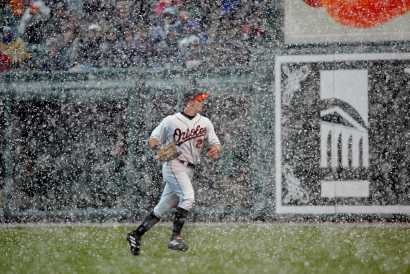 It was the damnedest thing I ever saw.  Finally the O’s manager came out and “suggested” to the umpire that maybe they should stop the game for a bit and the umps agreed.  Play was halted for 13 minutes, by which time the snow had moved on, and the game continued as usual.  Good thing, because I was most definitely NOT dressed to sit out in the snow for 3 hours.
The other noteworthy game I was at, (the “Honorable Mention” game), was not nearly that big of a deal.  It was only noteworthy because it was the first game played by the O’s highly touted rookie catcher, Matt Wieters.  I just happened to have tickets because the O’s were playing the Tigers and my Tigers-fan buddy Rik (the Chairman of Fuck Off), was in town for the game.  We caught games on Friday night and Sunday afternoon. 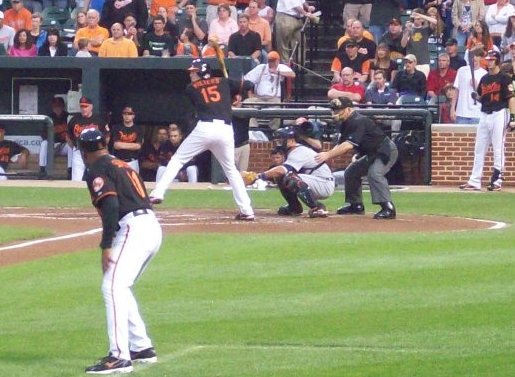 This was Wieters’ first at-bat.  I think he flied out.
Today’s game wasn’t overly remarkable, other than it being a nice day for baseball.  The Orioles pitcher did take a no-hitter into the 8th inning, but then gave up two hits.  The O’s won, 3-1.  But this year, the Orioles have made a number of changes to Camden Yards, so I thought I’d give you the lowdown, with a little bit of Then and Now.
Aside from the various upgrades to food vending areas and changes in vendors, there were 3 major changes to Camden Yards, in an attempt to make the park more fan friendly.
1) They shortened the right field wall under the Flag Court.  Camden Yards has a relatively short dimension to right field, but a huge wall.  From a fans perspective up on the Flag Court, the wall comes up to about my armpits.  It’s convenient for me to rest my elbows on the wall and watch batting practice, but for kids and people that aren’t 6’3”, not so much.  So they lowered the wall and put in a railing instead, providing better visibility for spectators of all sizes.
This was the wall before: 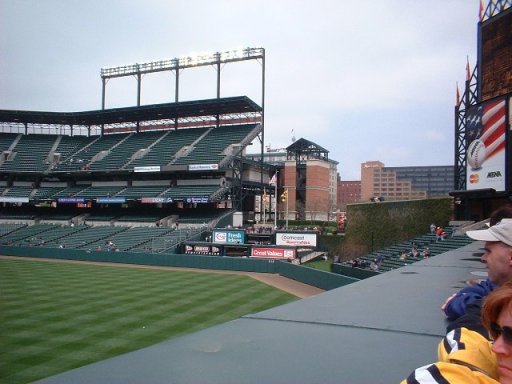 View from the Flag Court, with the high wall. (Shot was taken BEFORE the "Eyesore Hilton" was built in centerfield.) 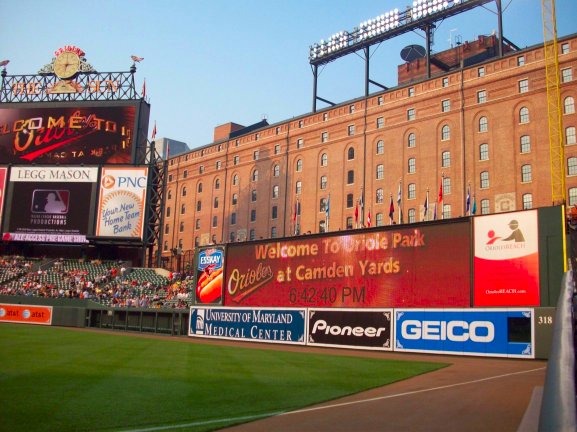 The right field wall and scoreboard.
This is what it’s like now: 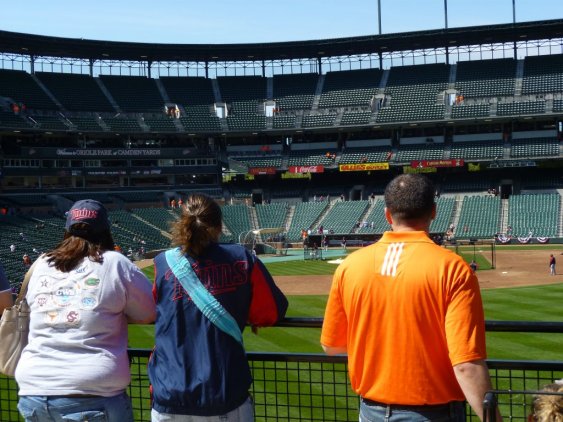 View from the flag court, featuring a lower railing. 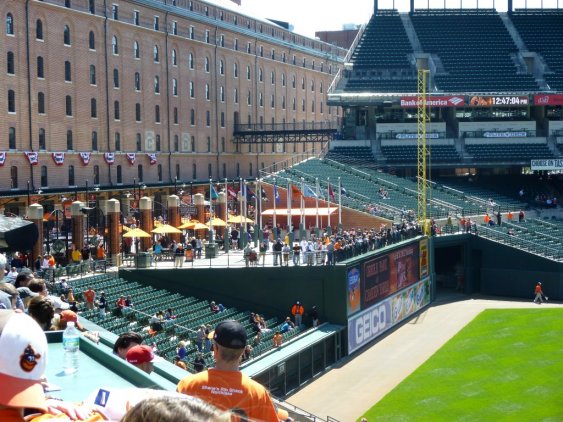 View of flag court from the new center field patio.
I always kind of liked the high wall because it fit me just fine.  My biggest problem was that if you weren’t right up to the wall, you couldn’t see the batting practice balls coming in and were liable to get conked in the melon.
But the new railing will make for much better viewing for all people, including the vertically challenged.
2) Statues added to the picnic area.  They used to have picnic tables and stuff set up in the center field area, and more recently they began broadcasting the pre and post game shows from a tent there.  While they haven’t been set up yet, plans are to unveil statues of Orioles who have had their numbers retired. 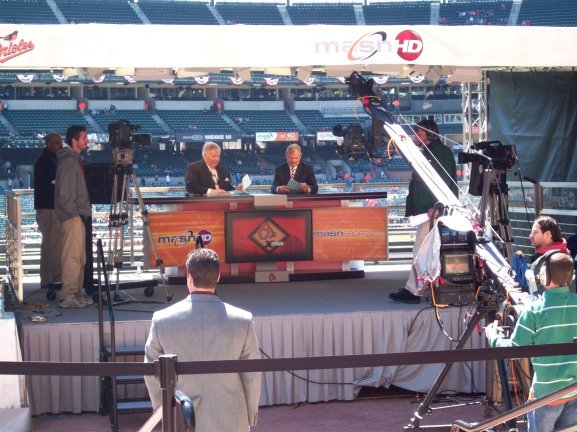 Unfortunately, I don’t have a good shot of the picnic area, but in 2009, they set up a sports desk in front of the area, just behind the bullpens in center field. 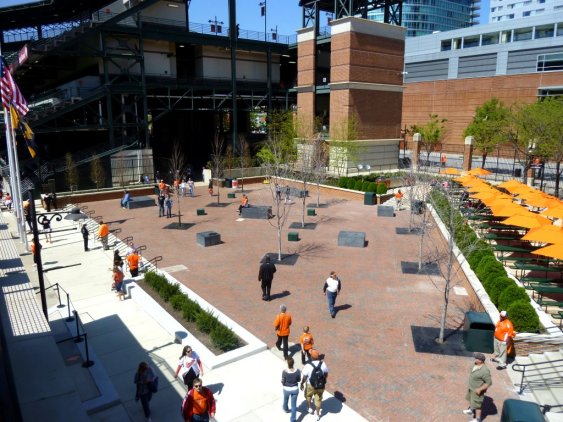 This is the Statue Court.  Each of those big granite blocks will have a statue put up on it later this year.  Seeing those blocks makes me want to hop up on one and start to rant.
As you may remember, I’ve complained at great length that their only tribute to these players is some giant metal numbers, randomly placed outside the entrance to Camden Yards.  It’s a cheap and highly impersonal “tribute” to the local heroes and is done so much better in places like Pittsburgh’s PNC Park.  So I’m glad the Orioles are taking steps to rectify the situation.  They already put up a Brooks Robinson statue outside the stadium. 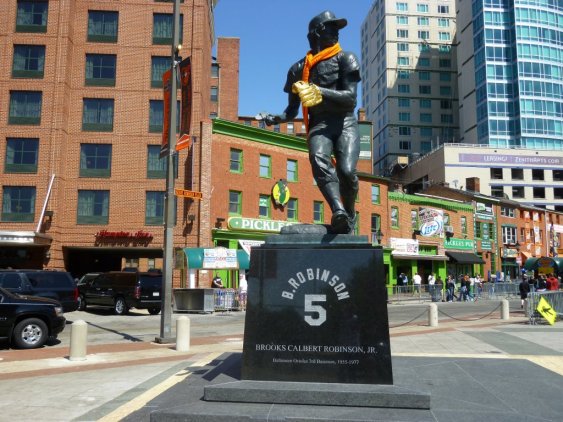 The statue is in a small median strip outside Camden Yards, between the park and a row of bars and food vendors.  Note the name on the orange and black street sign, “Brooks Robinson Plaza.”  Painting the glove gold was a nice touch to pay tribute to the raft of Gold Glove Awards he won.  (The orange scarf is not part of the original design.)
3) Patio area and bar on top of the center field camera stand.  The O’s have a big, green, ivy-covered wall in center, to serve as the batter’s backdrop for watching a pitch come in.  This year, they’ve put in a patio with a bar up there.  Any ticket holder can wander up there for free and stake a claim to one of the (few) tables and seats, or just stand at the rail (to effectively block the view of the people that are keeping YOU from sitting down).
The backdrop, before: 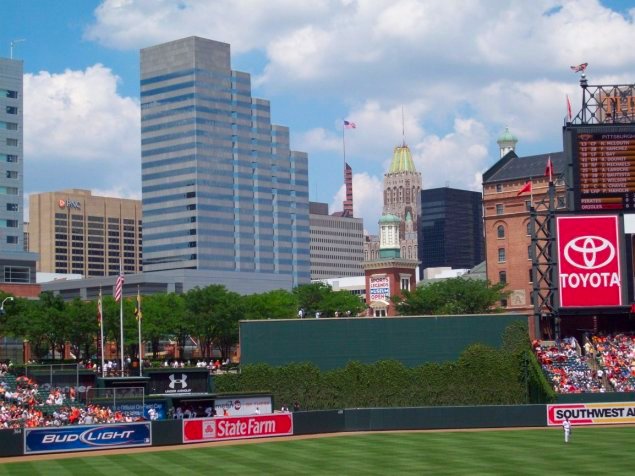 The centerfield camera stand, with the Five Bars Tower in the background.  (I really need to learn the name of that building.)
I don’t have any pictures from up on top, because I’ve never been an Orioles cameraman, so I’m pretty sure I’d have gotten tossed out or arrested if I’d ever climbed up there.  But this is what it’s like now: 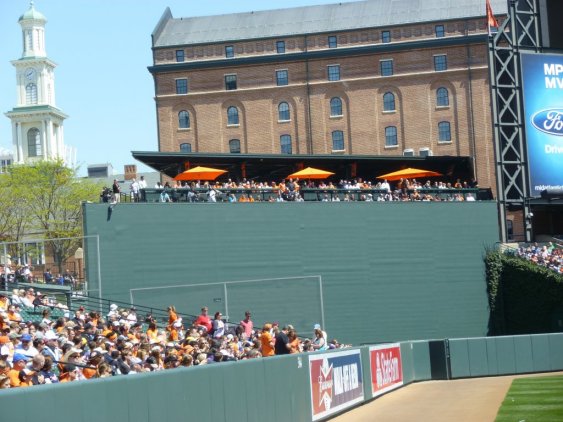 There are 2 tiers of seats, available on a first come-first serve basis. 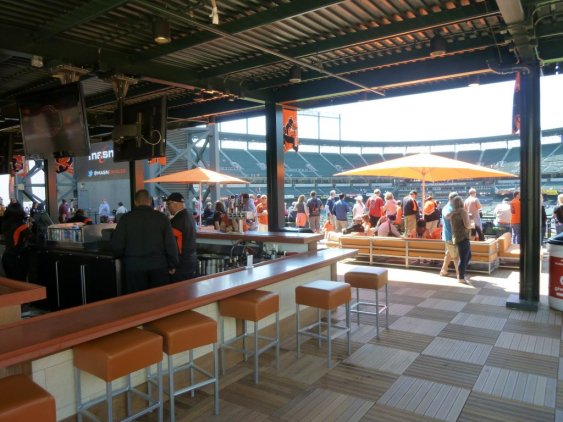 This is from up on the patio.  The bar is no joke!  The patio should be able to service quite a number of people.  There are TVs all around the bar, so you can sit there and watch the game on TV, while it is taking place live, right behind you. 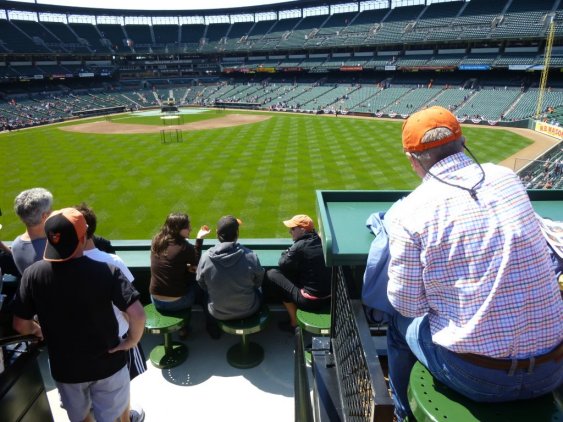 You can see the dual tiers of seating.  The TV cameras are down to the right in the front row. 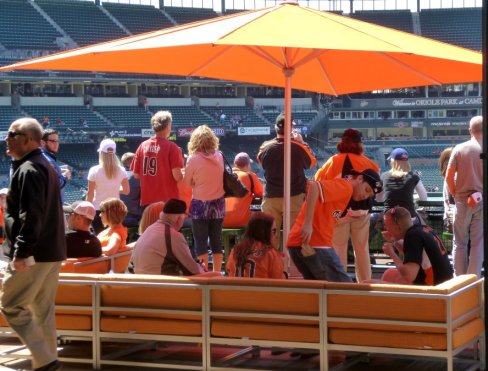 They have several clusters of modular sofa seats, which are ideal for a group of people that want to hang out and don’t care too much about the game.
All in all, it was a very pleasant day at The Yard.  I made conversation with a couple of 20-year old dudes, provided them with some tips about sneaking booze into a game, enjoyed a couple of beers and soaked up a little springtime sun.
Life is good. 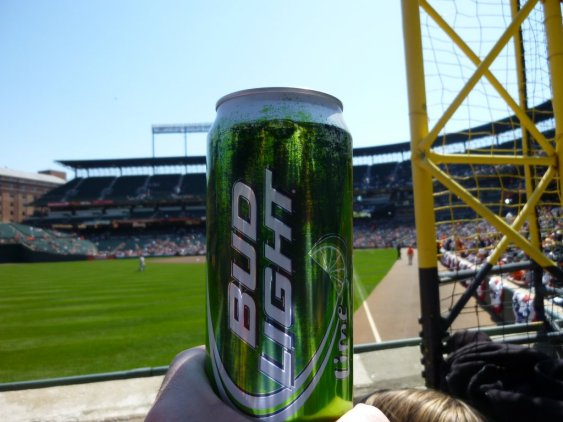 This is how I “go green” at the ballpark.
All photographs were taken by me, except for the two “snow” pics, which I downloaded back in 2003, I believe from the Baltimore Sun.
Posted by bluzdude at 7:13 PM

Email ThisBlogThis!Share to TwitterShare to FacebookShare to Pinterest
Labels: Baltimore Orioles, Picture This