Zen and the Art of Batting Practice

I had more to write about the Orioles game I went to last Sunday, but it would have made the previous post way too long.  So here we are.

Like I mentioned before, I went to the game by myself.  I have no qualms about doing this because then I get to ramble around where ever I want and stay as long as I like.   Obviously, my first priority was to document the ballpark upgrades for the post, but that still left me with plenty of time to take part in one of my favorite things: watching batting practice from the flag court.  The Orioles are usually done before the fans are allowed in so you only get to watch the visiting team.

If I go to the game with Pinky, we have to get there close to game time.  She’s bored and ready to leave by the 6th inning as it is, let alone if I drag her there two hours early.  And if I go with Sitcom Kelly, we usually hole up in one of those bars by the Brooks Robinson statue and drink cheap beer up until the National Anthem.  (Lord knows how many give-away shirts and bobbleheads (available to the first 10,000 fans) that I’ve missed because I’ve been drinking and carrying on with her…)

So, like I mentioned in Sunday’s post, you have to pay attention when you’re on the flag court during batting practice, lest you get clobbered by a home run ball.  This was especially true on Sunday because the Twins’ lefties were raining homers down on the flag court like it was their own personal Shock and Awe campaign.  (Not that it did them any good during the game, what with being 2-hit by the Birds.)  But in BP, they were mashing.  There were at least 2 or 3 that went clear over the flag court, over the iron fence, and onto Eutaw Street in front of the Warehouse.  A half dozen more bounced out through the fence.

Director’s DVD Commentary: If you’re not familiar, Eutaw Street is not really a ‘street’ once it runs inside the gates of the ballpark.  It’s a cobblestone corridor full of food and merch vendors that runs between the outfield wall and the B&O Warehouse.

Quite a number of batters have hit Eutaw Street on the fly during games.  And when they do, the team embeds a small plaque wherever the ball landed. 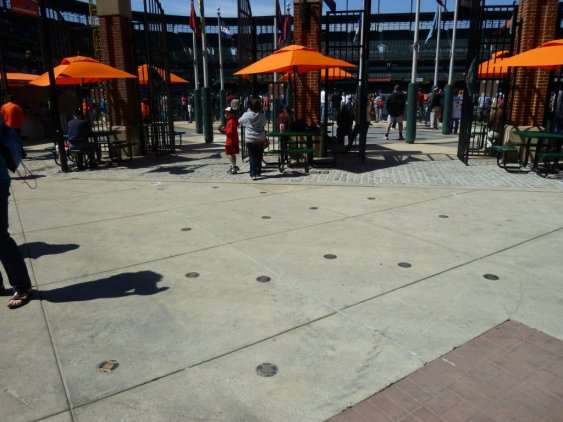 You can see 15 of them here, between the flag court and the Warehouse. 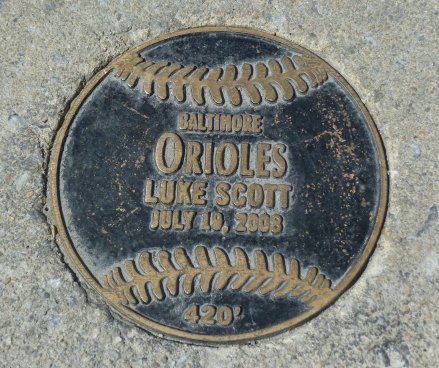 It’s a pretty cool thing that just keeps adding to the ambiance of the park.  It’s fun to stroll along and check out all the batters that hit these bombs.

Although you’d think otherwise, especially during the “Steroid Era,” no one has ever hit the Warehouse on the fly, during a game.  The only hitter with a documented Warehouse strike was Ken Griffey Jr, during the 1993 Home Run Derby before the All Star Game.  They put a plaque up for that too… 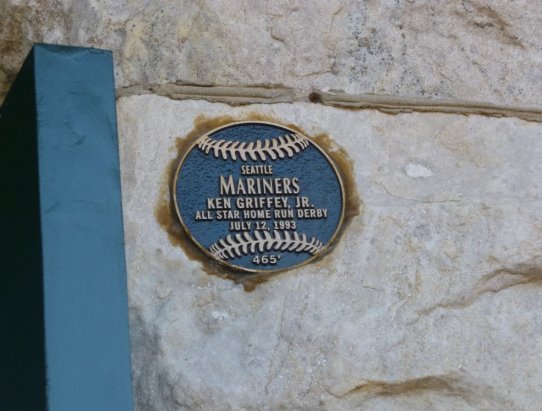 Griffey’s plaque, right beside the doorway to one of the shops in the Warehouse. Here, you can see where it hit, relative to the wall and doorway. 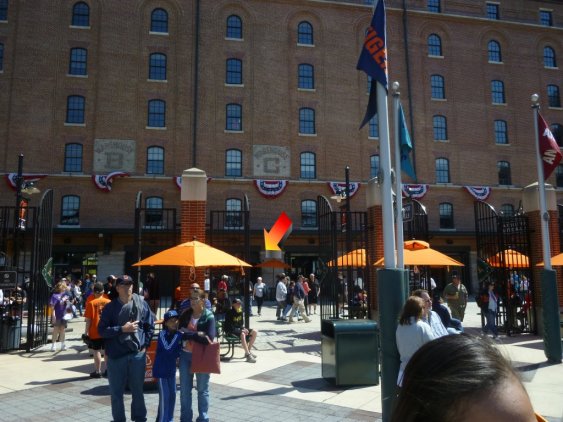 If you strain real hard, you can see the little spot at the end of that arrow.  I took the picture from about 8 feet from the outfield wall, so you can see just how far he cracked that one.

Back in the old Three Rivers Stadium, they used to paint the seats yellow wherever a home run ball landed in the upper deck.  Those really had to be monster blasts.  Famed leftie slugger Willie Stargell put a few up there, I know.  I think he would have certainly broken a few Warehouse windows, had he spent his career playing at Camden Yards.

During the Twins BP, one guy smacked one just to the right of the flag court and it landed in the last row of seats and just settled there. Some dude just jogged over and snatched up the easiest ball ever. 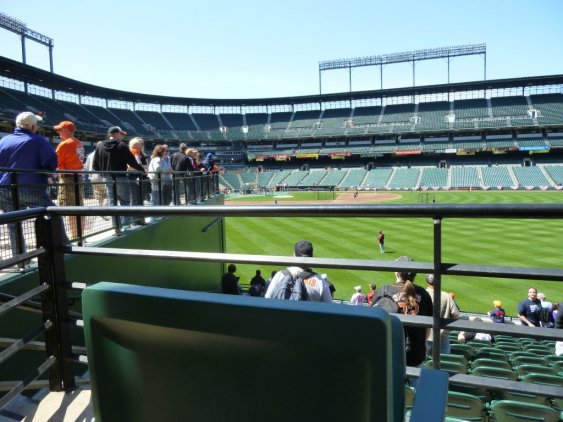 This was the chair where the ball landed.

I wrote all about my game ball-seeking exploits back in June of 2009, here.  Long story short, I was close a bunch of times until I finally got a foul ball, on one bounce off the warning track.  I still have aspirations, though, of nabbing another one.  It’s better if it’s during a game, but BP is cool with me too.  But you really have to be careful.  Even a big guy like me can get trampled.  I was up there once when it was pretty crowded and a ball started coming out way.  It was like a sea of dudes started moving toward the ball all at once and there was no way to fight the tide.  It was unsettling to get moved with the crowd against my will.

I think the reason everyone packed in was because the wall was so high.  If you weren’t up close, you couldn’t see the ball coming, so everyone tended to pack in close.  Now with the lower railing, you can stand farther back and still see the incoming rounds.

My strategy was to stay back and try to pick up a rebound.  Once a ball lands, it ricochets around like crazy, especially with all the flagpoles.  (There’s one for each American League team, set up to represent the current standings.)  When a ball lands there, it’s like someone throwing a foosball onto the foosball table… it just caroms all over the place.  If you’re lucky, it might come right to you.

I wasn’t that lucky… They all seemed to carom away from me.  But I tell you, if I had a baseball glove on, I’d have had a ball for sure.  I was standing relatively in the clear and someone smacked a long one right at me.  I saw it coming and backed up a bit, entertaining thoughts of trying to catch it.  But as it got close, I could better gauge how fast it was moving.  This is where the wisdom of advanced age kicked in.  I quickly thought to myself, “No fucking way,” and stepped aside.  I could hear it hissing through the air as it bounced about 2 feet to my left.  Probably would have broken my hand if I had tried to catch it bare-handed.  Best case scenario, my hand is swollen with contact hives on Monday morning.

If I’d had a glove on, I could have snagged it as easy as pie… it was right there.  Of course, I didn’t have a glove on because I’m a grownup now and have managed to acquire a degree of self-respect.  (Seriously!)  Plus, I’d have to lug the thing around all day, which might have put a crimp in my beer drinking.

Batting practice is the best time to see some of the game’s premier sluggers at work.  Some of their shots are epic.  I remember seeing Vladimir Guerrero (when he was with the Angels) mash one just under the upper deck in left, which then bounced up and down real fast between decks.  I’ve seen Sammy Sosa (when he was still with the Cubs) blast one off the back of the far bullpen wall in dead center, a distance for which if he had hit it to right, definitely would have hit the Warehouse.

It’s very hard to tell who’s who in BP because the players’ practice jerseys rarely have their numbers on them, and you’re too far away to make out their faces.  I could recognize Vlad because of his dreads and distinct batting stance and when Sosa batted, everyone was calling his name.  But otherwise, I have no idea who is up.

I’m going to try to get tickets for when the Angels come to town, just to see Albert Pujols take his hacks.  I’ve heard it’s quite an experience.  I just hope I can tell when he’s up.

Once BP was over, I went over to the beer stand there for my first ballpark beer of the day.  That’s my tradition.  I always try to buy my first beer from the beer lady on the flag court.  The same lady has been at that station ever since I started attending the games.  She’s an older black lady and she has such a great rapport with her customers.

I’ll say, “You got a Miller Lite for me in there?” and she’ll pull one out and say, “Now you come back and see me when you need another one, baby, I’m here for ya all day.”

Then we fist bump.  I am rarely able to go back because I’m always elsewhere during the game.  But I love our ritual.  I have no idea if she recognizes me from my half-dozen or so games a year, but I’d like to think that she does.

Speaking of beer, I was diggin’ on these 24-ounce Bud Light Lime cans.  They were going for $10, which I considered to be a “deal,” compared to the $8.00 16-ounce beers.  But it’s funny the kind of warped judgment that the ballpark nudges you towards.  Consider that 3 of those 24-ounce cans would be $30.  Would anyone consider a $30 six-pack a deal?

Thus is the allure of the old ball game.
Posted by bluzdude at 7:06 PM