I was going to resume with the retail stories today, but there’s just been too much going on this week.  So here we are again, with the Odd Bits.  And now for the first bit:

WHOO HOO!  HOW BOUT DEM O’S??
Despite my deepest fears and anxieties, the Orioles made their way to the American League Divisional Series (ALDS) last night, by beating the Texas Rangers 5-1.  The O’s named Joe Saunders to pitch; a guy they picked up off the scrap heap a couple months ago.  His previous record when facing Texas in their park was 0-6, with a 9-point-something ERA.  But somehow, sage manager Buck Showalter knew what strings to pull and got 5-plus innings out of the guy, who only gave up one run.

Meanwhile, the Orioles scrapped and manufactured runs bit by bit, until next thing you knew, they had a 4-run lead going into the late innings.  It was unbelievable to see the O’s celebrating on the field… their first such celebration since 1997.  Meanwhile, Showalter just stood off to the side, (almost) smiling like a proud grandfather.

I’m very relieved that the game was won clean, without any shenanigans like they had in Atlanta, where you’d swear the NFL replacement refs were moonlighting as umpires.  Now I don’t know that botching that “infield fly rule” call cost Atlanta the game… good teams can overcome bad calls, but it certainly didn't look good.  Nor did the fans at the game, who pelted bottles, cans and garbage out onto the field and contributed to a 20-minute delay.  It made them look like spoiled children.

I’m sure TBS wasn’t too thrilled either, because the delay pushed the game back into the slot where they were supposed to air the AL Wild Card game.  They had to move coverage onto TNT for 15 minutes, no doubt ticking off the people that wanted to see “A Time to Kill.”

So, this means that I get to go see Game 1 on Sunday (6:15) and Game 2 on Monday (8:00).  The Steelers will be on TV at 1:00 on Sunday, so I can watch the game at home in peace, then hit the subway and roll on out to The Yard before game time, for a little Charm City-style camaraderie.  (Crab cakes and a National Bohemian.)  OK, for me, it will probably be more like a bratwurst and a Miller Lite.

I also have to work on my accent.  See, in Baltimore, they don’t call them the “O’s” like in “rose.”  Old time Baltimoreans say it like “Ay-oooze.”  “How ‘bout dem Ay-oooze?”

Orioles Mojo
For most of my time here, the only thing I’ve worn to O’s games has been an orange Orioles t-shirt, either one I bought, or one of the T-Shirt Night giveaways.  Then for this season I got a white #32 Matt Wieters game jersey.  I've had mixed results wearing that one to the games.  (No I haven’t tracked it, I only have anecdotal information.)

But last week, I ordered a #21 Nick Markakis jersey and it came last night.  Given its untested mojo potential, I wasn't sure if I should wear it during the game or not.  But I figured since it was the playoffs, a bold step may be required.  I wore the jersey and learned that so far, it has some quality mojo.  But I am a bit dismayed over another aspect… the jersey isn't white.

A team’s home jersey is supposed to be white… blinding white… Mitt Romney-white.  When on their home field, the players are supposed to sparkle in the summer sun.  One of my earliest memories is that first time I went to a ballgame, at Wrigley Field in Chicago, and seeing the lush green of the grass and ivy wall, as a backdrop for the dazzling white Cubbie uniforms in between the blue pinstripes.

The jersey I was sent is more of a cream color.  Or eggshell… or ecru.  (And I hate that I even know that ecru is a color.  Stupid crossword puzzles…) I wasn't sure if it might be an effect of low or incandescent lighting, so I compared my new jersey with the one I had. 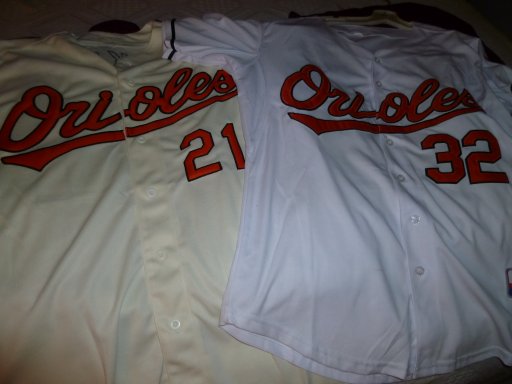 Other than that, it looks to be a decent knockoff.  When paying $30.00 for a jersey that should, in theory, cost a couple hundred, you can’t really complain.  So I figure, I can wear the white one when I go to day games, and the cream-colored one when I go to night games and the off-white will be less noticeable.  Unless, of course, the O’s lose when I wear it.  Then all bets are off.

I Love Rock n O’s
You know who else is really excited about the Oriole in the playoffs?  My close personal friend, Joan Jett.  I read that she sent the Orioles players a letter of support, along with a box of CDs and other swag.  The letter was posted up on a bulletin board in the clubhouse.

The first time I met Joan, it was at an Orioles game at the old Memorial Stadium in the mid-80s.  She was sitting in our row, (we had my dad’s company seats behind the dugout), so I got her autograph and exchanged pleasantries.

I saw her at Camden Yards in 2003, but I didn't get to talk to her.  She was there to play a free show after the game.  But before that, she served as “Bat Grrl” for the Old Timers Game they had before the main game.  She took her duties seriously too, as she hauled her little ass out there after every Oriole hitter, to retrieve the bat. 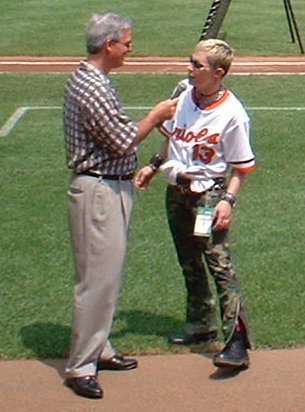 Joan, talking to one of the game announcers.  This was during her unfortunate Peroxide Buzz Cut Phase.

This is how I usually recall Joan Jett:

My brother sent me this newspaper clipping in 1989, after Joan threw out the first pitch at a game.  Yowza!

(Of course I still have it… What?)

It was such a cross section of fans at her show after the game.  I saw middle-aged rockers, mixing with bad-ass biker types, mixing with rough-looking lesbians, with a smattering of teenage fans as well. 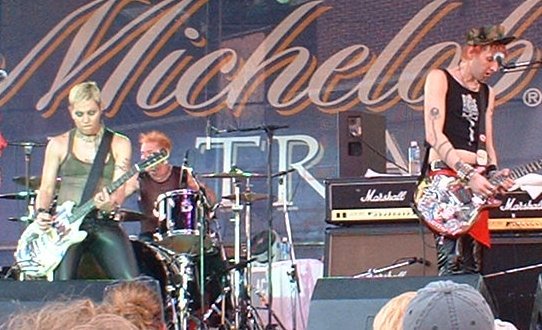 Regardless of the audience, Joan always rocks.

Director’s DVD Commentary: Unfortunately, I didn't get many quality pictures.  This was my first digital camera, probably no more than 1.2 megapixels.  It just didn't have the juice or much of a zoom.  ALSO, if there is any justice in the world, Joan Jett will take her rightful place in the Rock and Roll Hall of Fame, now that she is on the ballot for the 2nd time.  It's about twenty-some years overdue.

Birthday Bluz
Following my blog friend Val’s declaration that her birthday month be declared Valtember, I intended to spend the month celebrating Bluztober.  My birthday was on Monday, (along with my same birthday’d friend Jessica!) but at this age, I kind of run out of steam for the big celebrations.

Last year, it was like, “OMG, the Big Five-Oh!  Let the Wild Rumpus start!”

Nevertheless, I made out OK.  Pinky hooked me up real nice, with a chicken parm dinner and my favorite birthday cake. It’s a German Chocolate cake, not a meat loaf.  Trust me.

Pinky also hit the right notes with my birthday presents too… 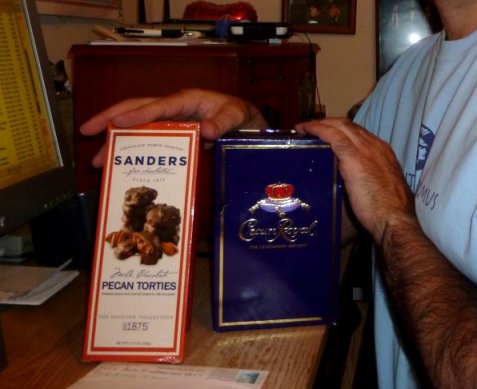 Pecan turtles and Crown Royal… what’s not to love?

She also did a new picture for me, based on a card my mom once sent. 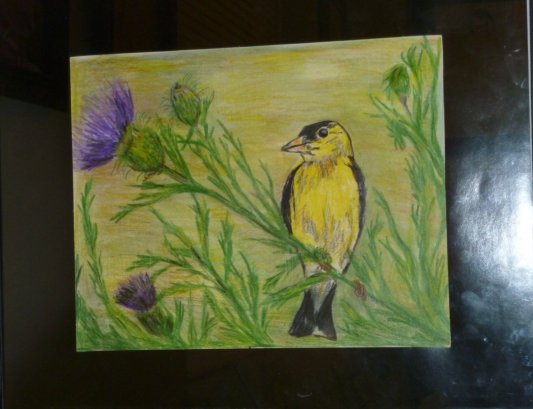 A goldfinch; the kind that used to frequent my parent's back yard in Green Bay.

I got some other goodies from the rest of the family, (and thank you all for that!), so I had a nice, cozy little birthday.  I don’t really need a whole month of it… I got shit to do…