In September, I started to chronicle my life in retail.  You can see by this being “Part 9,” that I've had a lot to tell.  If you’re new to this series, you should start with Part 1.  Otherwise, you can join our hero as he finally got himself out of the stores and into the home office.

When I finally made the leap over the walls and into the home office, I thought I landed in the Promised Land.  No more name tags.  No more working late nights and weekends.  No more supervising a bunch of unreliable kids.

I’ve written before about the benefits of working in the office as it related to meeting famous people office before, in my Brushes with the Greats and Near Greats series.  Suffice to say that the Big Wheels in the office had the juice to draw in the higher caliber artists to meet.  I hoped to at least become a Training Wheel.

Early on, I loved working there.  My boss, Dave, (who I wrote about in my “Code of Silence” post) was great to work for.  But it was Vinnie with whom I worked the closest.  Vinnie was our singles buyer and a genuine character; the one guy that was truly indispensable.

First of all, he knew everybody in the music business.  He used to own a nightclub in town, where a great many big acts played before they were “big.”  Vinnie knew the bands, their managers, their families, the promoters, people at the labels… Whenever the brass needed an act to play our convention or any other company event, Vinnie was the guy to corral the talent.

Vinnie was also the one guy who would go toe-to-toe with anyone, from the label salesmen right on up to our CEO.  He’d been around so long, I’m sure he knew where all the bodies were buried, so to speak.  Sometimes when he felt he’d been slighted, he’d storm into the CEO’s office and threaten to quit.  I don’t know what went on in there, but Vin always got his way.

Vinnie took a lot of shit for being a short, loud guy from Brooklyn, but he had a huge heart and would do anything for anyone.  I was fortunate to be tucked under Vinnie’s wing and I think it was a mutually beneficial arrangement.  I learned a ton about the top-side of the music business, and I think I proved to be a good sounding board for him.  Plus I could help clean up some of the memos he had to write.  Formal writing and grammar were not exactly his strong suits.

I remember one time when he read me something he put on his self-evaluation, which I immediately put into my “Quote Book.”  He said, “ I've greatly improved my ability to communicate with others. What I need to improve is other people’s ability to understand me.”

With the nature of my job (trying to reduce our stores’ use of outside vendors, called One Stops), we needed to work together closely.  If I was getting a lot of requests for a new single in a particular region, as often happened, I had to make sure Vin knew about it, so that he could start bringing the title in-house.  And it was by watching him that I was able to learn the principles of ordering for the warehouse.

When singles first started appearing in the CD format, they were mostly dance mixes; the CD equivalent of the “12-inch single.”  Because it was such a niche market, all of our CD singles were obtained through One Stops.  Once we saw that these were becoming a sustaining product, the decision was made to bring them in-house and service our stores through our warehouse.  They tabbed me to run the transition.

I loved it!  This was the business I was made for!  I set up the systems from the ground up and ran it once it was complete.  And the best part was that I got to use a computer to do it.

Yes, this was the first time I’d ever used any sort of office applications on a computer.  They didn't use Microsoft products at the time… I believe those were still in their infancy.  But I used Lotus and WordPerfect, which operated similarly to Excel and Word.  But coming in with zero PC experience, I had to lean on the department admins a lot.

It was mind-blowing for me.  Just learning how to construct a simple list of titles in inventory was amazing.  The fact that I could add and subtract from an alphabetized list without retyping the whole thing… brilliant!  If only I had this revolutionary technology when I was in college, I would have had so much more time for eating pizza, drinking beer and chasing girls.

I made some really great friends in the office.  We worked together, lunched together, played on the company softball team together and went to industry events.  And we still had the Store-Opening Swat Team, like in the old days.

Just like when we had to open the big Terminal Towers store in downtown Cleveland, when we opened a mid-town Manhattan store, right behind Radio City Music Hall, it was a big freakin’ deal.  All of us from the Merchandising Department bussed down there and set up the store from the ground, up.

You know how they say New York is the “City That Never Sleeps?”  Trust me, it sleeps.  It’s really weird going out onto the streets of Manhattan at 2:00 AM and finding them deserted.  We were so punch-drunk from working, we ran down the middle of the streets yelling and singing like it was our playground… It was a crazy time.

I also got one of my favorite trophies from that experience.  Remember this commercial/print ad?

Our store had a big interactive Maxell tape display consisting of an identical set, where you could put yourself in the famous ad.  How could anyone possibly resist? 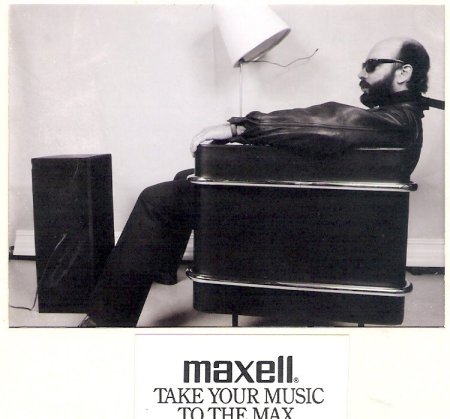 They really should have spread the set out more though…

Once my boss Dave left the company, things started to get a lot less fun.  First they brought in a guy from the Toys industry.  That was pretty bumpy, because he really didn't have any idea what he was doing.  (This is the guy that I wrote about yapping away for 2 hours at a company seminar, blowing through everyone’s time, then telling everyone else to “wrap it up quickly.”  I didn't and went on to kill the room.)

He was replaced about a year later, by the Regional Manager who originally brought me to NY.  Unfortunately, the guy was a complete prick.  For some reason, I ended up on his shit list.  I think he thought I didn't stay at work late enough.

In another time, I probably would have stayed every night.  But now I was married to a woman that worked for the state.  For her job, you punched in at 9 and punched out at 5, period.  She didn't understand the private sector culture, where if you leave at 5, people wonder why you’re such a slacker.  Same with working on weekends… to her it was just unheard of and if I mentioned going in on Saturday to work on a project, I had to hear about it for the rest of the week.

In 1994, the music business entered a big downturn.  Most relevant back catalog titles had finally been put on CD, so people were pretty much done replacing their LPs with CDs.  It was left to new releases to drive sales and that didn't work so well.
The company hired a new kid, fresh out of one of our stores, and they had me train him on how I managed the One Stops.  But I began to suspect I was in trouble a little later, when we were in a staff meeting where everyone reported on what they were doing.  The boss skipped me.  Vinnie spoke up and said, “Hey, you forgot to ask Bluz…”

I gave my report, but I could see the guy was checked out.  He didn't forget; he just knew I was irrelevant.  He called me into his office the next day and let me go.  (About 20 other people from the office were laid off as well.)

I was totally shell-shocked.  I mean, I’d given this company 12 years of my life.  I’d worked my ass off, worked over holidays, missed time with friends and family, moved across the country, improved their systems, and always acted in the company’s best interests.

Having me train my own replacement was the final insult.  It was purely a cost cutting measure.  They still needed the job done and they still wanted it done the way I was doing it (or else they wouldn't have had me train him), they just wanted to pay less for it.  Fuckers.

He said he wanted me to leave all my stuff and come back to get it on the weekend.  That way it wouldn't make a “scene.”  I was too numb to even say goodbye to anyone except Vinnie.  He was mad as a wet hen and tried to intercede on my behalf.  But he didn't get his way with this one.

So now I had to go home and tell my new wife of eight months, that I was out of a job.  And you know by now how THAT all worked out…

Next up: Same story, different company.
Posted by bluzdude at 6:18 PM

Email ThisBlogThis!Share to TwitterShare to FacebookShare to Pinterest
Labels: Bluz LIfe, Bluz Music, Office Bluz, Things That Piss Me Off