In September, I started to chronicle my life in retail.  You can see by this being “Part 12,” that I've had a lot to tell.  If you’re new to this series, you should start with Part 1.  Otherwise, please join our hero as he tries to rekindle his managerial spirit in a new retail industry.

After about a year and a half at the craft store, our happy little family began to break up.  One of the assistant managers ended up in the doghouse; in fact, the general manager literally offered me her job.  If I would agree, she’d can the assistant immediately.

Now, I didn't care one way or another about what happened to the assistant.  We weren't particularly close, nor were we at odds either.  But I’d seen the job and I didn't want any part of it.  For me, I need to know when I’m coming and going.  I needed to know when I was coming home so I could let Future-Ex know if I’d be there for meals or not, or whether I’d be there to run her kid around.

The assistants’ schedules were like, “Come in early and I’ll let you know when you can leave.”  Also, a promotion would then put me in charge of people with whom I’d become good friends.  While I would have appreciated the (modest) bump in salary, the negatives were just too steep.

Under other circumstances, I might have taken it, because I was starting to get antsy about what I was doing there.  I wasn't some drifting college kid; I needed a real job where I could go somewhere, not just stock some shelves for 15K a year.

It turned out that the assistant who was in the doghouse quit a couple months later, to become a District Manager for a video rental chain.  (Remember those?)  Not long after that, two of my favorite co-workers went with her to train to become store managers.  I don’t remember if she came to me or I went to her, but I also agreed to jump ship and dip my toe into video rental.  At least I’d be getting back into a medium I knew something about.

My manager was nice about it; she knew I’d been slumming and needed something more.  She only asked that I put it in writing, to which I agreed, provided I could do it in limericks.  She agreed, provided there was no haiku.  I threw in a haiku anyway, because that’s just how I roll.  (I posted that “letter” before, if you care to have a look.  It was pretty good work, if I do say so myself.)

So in March of 1997, I became a trainee for Video World, a 19-store chain that ran from Virginia to upstate New York.  They started me in a downtown store because that’s where their best training manager was.  It was nothing I hadn't been through before at my record store in Cleveland.

The biggest difference was in me.  I was no longer the unsure 20-something, testing the waters of wielding authority. 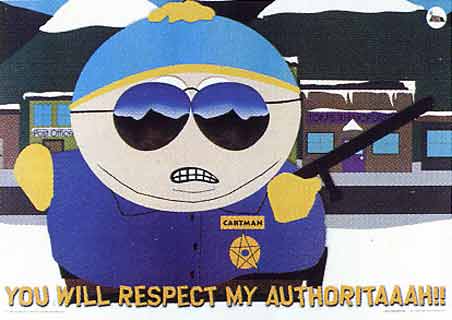 All I really needed to do was learn the store systems and procedures.  I was confident I could handle everything else.  But it was funny because right off the bat, I started bumping heads with some of the staff there.  They expected me to let them run things, but they got the old what-for.

There was one time that we were getting slammed with customers.  I was up at the register alone and asked another girl to come open up another register.  Chickie had the nerve to tell me she was about to take a break.  I told her she could have a break once we cleared the line, but she wheeled and went back to the break room anyway.  I wasn't going to get into a pissing contest in front of all the customers, but I later told her (pointedly) that breaks were taken when it was convenient for store operation and NOT whenever she felt like it.

The second my training manager came in the next day, Chickie was complaining to her about me.  Once I was pulled into the mix and laid out the situation, the manager was like, “Trainee Bluz is right.  You need to take your breaks when it’s slow, not when you’re needed elsewhere.”

Video rental was a strange business… it was was similar to the record stores, but still completely different.  (And remember, this was 1997; DVDs weren't invented yet, so the medium was all VHS.  There’s a lot more that can go wrong with VHS than with DVDs.)

Record store business wasn't dependent on customers to bring shit back.  In video rental, it’s all about the turn-around.  Older or “catalog” movies had the 5-day return terms.  But the big money was to be made on new releases, so those were 1-day or overnight returns.  The idea was to get those things in and out as many times as possible, so to equal the cost of the tape quickly and begin making money on it.

There was a big misconception about how much the tapes cost.  At that time, only certain movies were released to stores (aka “sell-through), and they were usually either the big Hollywood hits or children’s movies.  So everyone figured that the videos cost around $20 because that’s how much they were at Target.

In reality, most videos released for rental cost between $60 and $100 per tape!  It was obscene!  Somebody was making a shit-pot full of dough on those prices.  And you could believe it because there was no alternative.  When you wanted to see a movie that was no longer in the theater, you had to go to a video rental store, period.  Or wait another 3 months and see it on HBO.

Anyway, people would lose their freakin’ minds when they brought back a mangled tape and we’d try to charge them the replacement price.  That was the other unique part about video rental.  We had to spend a considerable amount of time trying to get people to return our goddamned tapes.  Every evening we’d have to make calls to anyone with a tape overdue by a week or more.  Man, I hated that… I hated becoming that which I hate the most… a dinnertime caller.  Sometimes, they’d be, “Oh OK, I forgot.  I’ll bring it right in.”

But I also heard every excuse in the book.  They’d swear up and down that they’d already brought it back, and we’d go and double or triple check.  Usually, we’d find it in the overnight drop box the next day.  People bringing back overdue tapes almost always used the night drop box.

Very rarely was it a mistake on our part.  Our systems were simple… the tapes were scanned out and scanned back in right from the drop box.  So even if it wasn't where it was supposed to be on the shelf, we still knew if it was in the store.

The most common occurrence was that they gave it to their kid to return, but he didn't do it.  Other times, they’d return the case with the wrong movie… sometimes even their own movie… in the box.  And then they’d claim that they shouldn't have to pay any additional overdue fees.  I’d be like, “Why, for returning the box?  Nobody rents the box…”

People ALWAYS complained about the overdue fees.  And we did have some leeway to remove them and we would under compelling circumstances.  But a deal’s a deal.  You agree to return it the next day and you don’t?  You owe the overdue fee.  Don’t come squawking to me about it.  We need to recoup the money we lost by being unable to rent it again.

And we had to make sure we were discreet, especially with late fees.  If I guy is in there with his family, renting some standard fare, you couldn't just go, “Sorry, I have to charge you a $4 late fee on “Spooge Girls 12” and $6 on “Debbie Does Donkey.”

One week, I made it my priority to get things alphabetized in there.  I mean, there were so many “series,” like “The Best of Anita Dickens, Volumes 1 – 23,” but they’d all be on different shelves.  There was no reason why they couldn't be all together.  But it did make for some interesting decision making… like trying to decide whether “10-Inch Butt Blasters” should go at the beginning, with the digits found before the “A’s” and “A Connecticut Wankee in King Arthur’s Court,” or with the “T’s” right before “Ten Tawdry Tails of Turpitude.”

Who knew my organizational and copy editing skills would be put to such practical use?

The best perk of the job was getting to take the movies home for free, (as long as we had it back the next morning).  The store had a vested interest in the staff being familiar with all kinds of movies, because as opposed to in the record stores, we were constantly asked for recommendations.

I loved this and soon realized that I’d better keep some good ideas in-hand for any viewing situation.  It was then that I began assigning a 1 – 5 rating to each movie I saw.  It’s a habit that I still keep today.  When I started, I kept the ratings and a brief description on a notepad for later reference, but as soon as I got my first computer, I transferred my notes to an Excel sheet.  I’m up to 478 listings now.  I've actually rated more movies than that, but when I see a movie for the first time because I bought it, the ratings and description go on my Movie Roster (inventory) spreadsheet.

Next up: Bluz takes his last store.
Posted by bluzdude at 7:07 PM

Email ThisBlogThis!Share to TwitterShare to FacebookShare to Pinterest
Labels: Bluz LIfe, Bluz on Film, Bullshit, Stories and Misadventures, Things That Piss Me Off