I wrote about attending Game 1 of the AL Divisional Series (ALDS) with my brother in my last post.  The game was on Sunday, and featured a 2 and a half hour rain delay.  I also had tickets to Game 2, on Monday night and I went with my friend, Sitcom Kelly.

This time around, I didn't get to bask in the rarified air of the club section.  Our seats were 12 rows deep in left field.  That’s where Sitcom Kelly and I usually sit.  It provides close proximity to the field for the best price.

The game was at 8:00, so I bolted straight down to the park right after work.  I immediately headed for our usual pre-game hangout, The Bullpen, home of “Cheap Ass Beer.”  Because we had a good couple of hours to kill, I really wanted a place to sit, after having to stand the whole time during Sunday’s rain delay.  Luckily, I found one on the upstairs level.  But there would be a price for my comfort.

The reason we always go there is that in addition to having decent bar pizza, they sell cans of beer at 2 for $5.00.  This is a huge savings over the beer inside Camden Yards.  We usually put a good base on early, then nurse a couple of the $8 beers throughout the game.  So when I plunked down my 5-spot (plus tip) for a couple of Miller Lites, the bartender was like, “Um, we’re not running that special, because it’s the playoffs.  The beers are 2 for $8.00.”

Price gouging… because of a playoff game.  I expect price gouging during hurricanes and other public hardships, but this brazen money-grab rubbed me the wrong way.  I mean, just having a couple of playoff games in Baltimore should have been an unexpected trough of “found money” for all the local establishments.  The fact that they felt it necessary to raise the price per beer by 37% is just wrong.  How dare they take advantage of our Oriole Optimism?  Of course we continued to drink there anyway, because they were still cheaper than the beers at the game.  It was less than ballpark prices, but right around strip club prices (last I checked, many years ago).

They had another rally towel giveaway, like they did for Game 1.  This time, the towels were white.  They shouldn't have done that either… I mean, who wants to be seen waving a white towel?  Isn't that the sign for giving up?  They've got to think these things through.

The biggest difference between these two playoff games and regular season games against the Yankees is that there were so few Yankee fans here for the playoffs.  Usually, they come close to outnumbering Orioles fans here and they’re definitely louder.  But with the tight control on who was getting offers to buy tickets, (season ticket holders, others that signed up in advance on the Orioles website), they really stacked the deck for the home team.

Not long after we got to our seats, it started to drizzle, shortly after which they announced another rain delay.  We retreated to the main concourse to wait it out.  Since I’d been sitting almost all day, I decided to stand for just a bit, right at the bottom of some stairs.  But before I could sit down (which I fully intended to do), this other broad and her boyfriend sat down directly behind me.  I mean if I bent at the knee to sit, I’d have sat right in her lap.  The nerve!  I hope she appreciated the view.  I whispered to Sitcom Kelly that this would be the perfect time for the after-effects of all that sausage and pizza and beer I had earlier, to kick in.

Luckily, this rain delay only ran 45 minutes, after which we settled into our seats and took stock of those around us.  Right in front of us, we found some Yankee fans. 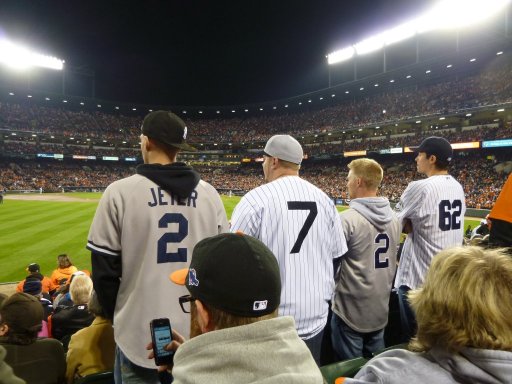 These guys would be trouble all night; not for being obnoxious, but for standing up and blocking my view so often.

I know I’m getting old and all, but it bugs the crap out of me when people stand up for no apparent reason, especially people in the front row.  It’s one thing to stand up out of excitement when someone cracks a long ball, but if you’re the only one in the section that’s standing up, I’m sorry, but you’re an asshole.  The rest of us didn't fork over big bucks for a close-up view of your butt cheeks.  Now sit the fuck down.

This was our view, when people weren’t blocking the field: 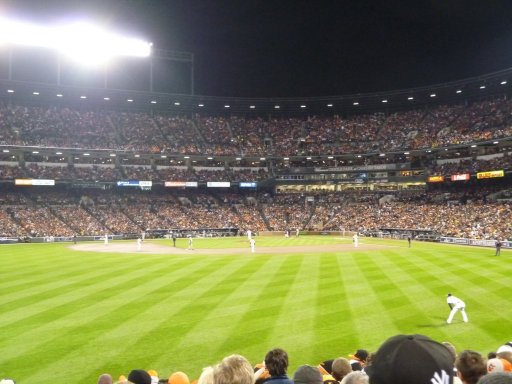 Over to the side, you can see where my brother and I were sitting on Sunday. 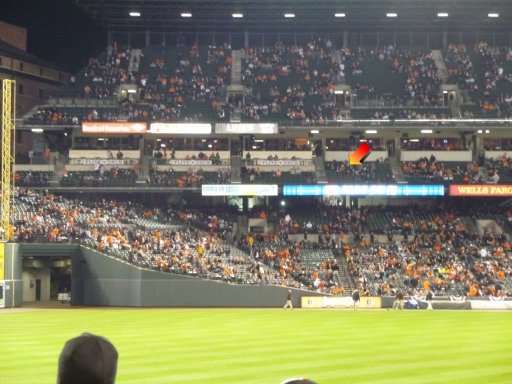 The arrow points to where we were.

In fact, if you zoom in and squint, you can actually see us sitting there. 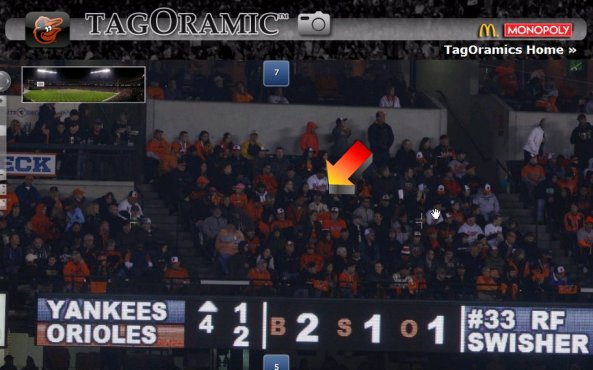 Closer still, you can see that my bro is watching the game, and I am posing thoughtfully for the camera. 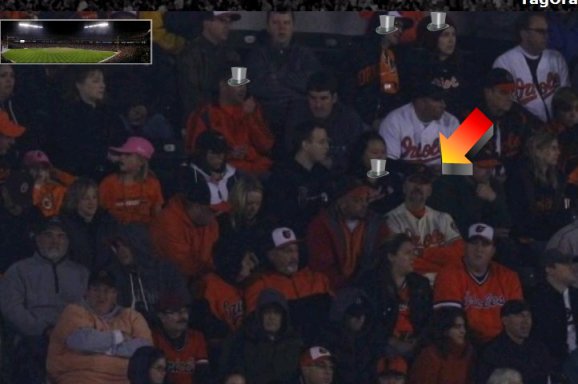 No, there wasn't some kind of time-altering wormhole… Sitcom Kelly found a part of the Orioles website where they had a panorama picture that showed everyone in the ballpark.  The last 2 shots were screen caps I took from it.

They had one from Monday night as well… 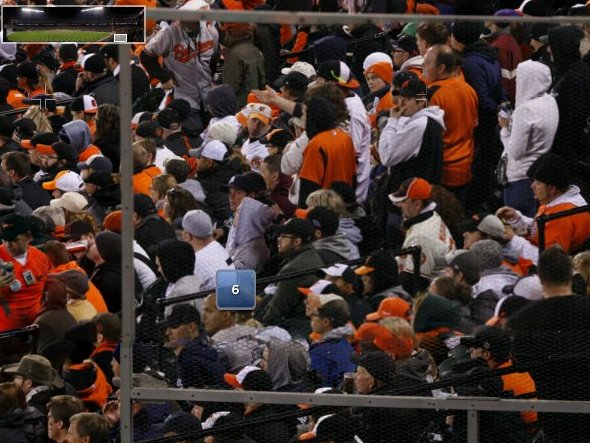 No, that’s not a bunch of long Polamalu-hair coming out from under my cap, that’s Sitcom Kelly, who got “Wilsoned” once again.

Here’s another cool sight from the night… future Hall of Famer Andy Petitte, warming up right in front of us. 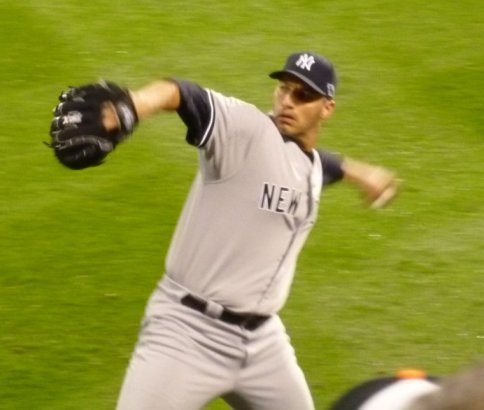 “Hey Andy, tell Roger we said hi.  Oh yeah, you two aren't talking, ever since you ratted him out to the Steroids Committee!”

There was another character running around our section. 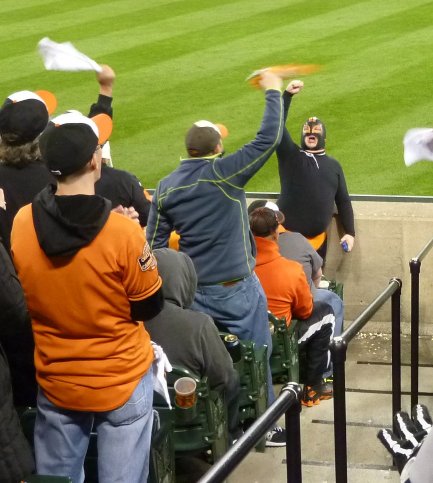 I think this guy (who goes by the name of “Carne Cabeza,” which means “Meat Head” in
Spanish) violates every fashion law, as set forth by MistysLaws.  Leggings as pants: check.  Underwear on top: check.  Cape: um, I don’t know if she’s ruled on the use of a cape.  Maybe that’s yet to come.  I suspect the mask is an improvement. 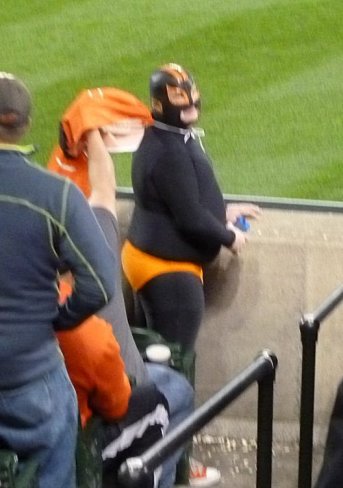 All I can say is that this guy’s tights were so snug; you could tell whether or not he was Jewish.

For game mojo, I wore mostly the same stuff as I did for Game 1, although I changed hats and added a heavy windbreaker.  You probably think I should have changed jerseys, but my jersey might have been the only thing that was keeping the score tied for so long.  I figured the Yankees hit the winning home run while I was in the restroom, and were thus removed from the effects of my game jersey.  Also, my other O’s jersey was a size smaller, so I couldn't have gotten it over all my layers.

(Yes, the jersey always has to go on the outside.  That’s the rule.  I've only violated it once, because it was 11 degrees out, and the Steelers got their asses kicked by the Patriots in the 2005 AFC Championship Game.)

With the rain delay, the game ended up starting at almost the same time that Sunday’s game did, so I knew it was going to be another late night.  But because I dressed warmer I remained pretty comfortable.  We stayed for the whole game, which was another close one.  The Orioles were nursing a one-run lead throughout the later innings.  The place was really rocking and the towels were twirling like crazy. 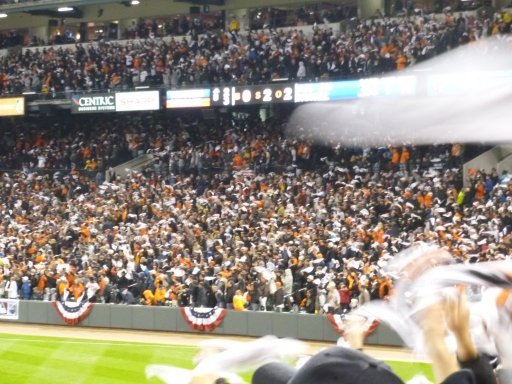 “Riiiight, my Baltimore friends, towel twirling is only stupid when the towels are yellow and Steeler fans are twirling them...”

I always read about how Ratbird fans hate the Terrible Towel and hear them mock it every chance they get.  But here they are (disguised as O’s fans) doing the same damn thing.  Just wait until I hear the next Ratty fan dis The Towel.  And now I've got photographic evidence…

Anyway, the game wound up around midnight and the O’s hung on for the win.  The place went batshit crazy… I can’t lie; it was pretty cool.  So duly impressed was I that I ponied up for 2 pairs of AL Championship Series tickets this week.  Should my Birds get that far, it’s not something I would want to miss.  If championship baseball comes to town, it would be a crying shame not to be a part of it. 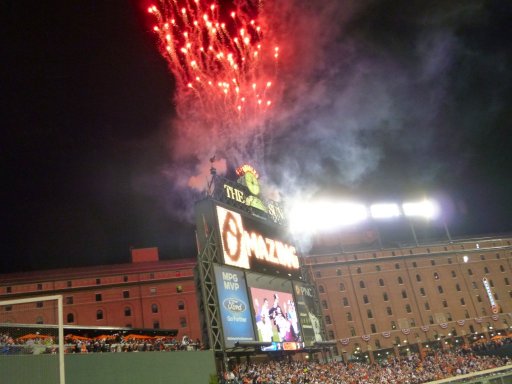