A Life of Whacked

This week I had the chance to have lunch with my friend Misty, who writes the blog, Misty’s Laws.  She’s best known for her running feature, Weekly Whacked, wherein she secretly takes pictures of the walking fashion atrocities she encounters on the streets of downtown Baltimore.  It’s kind of like a free-range “People of WalMart.”

Anyway, as we were shooting the breeze, I happened to mention how there was a time when I totally would been a candidate for Weekly Whacked.  This led me to realize it would make for a brainless  simple  easy  entertaining post to show you some of my fashion mistakes over the years.  As Rodney Dangerfield might have said, “I’m OK now but I used to be in rough shape.”

I started out as a pretty dapper kid.  It was the mid 60s and grownups still dressed their kids up when they took them out. 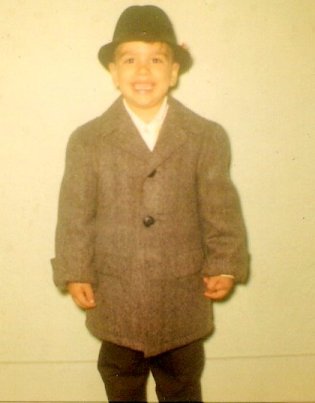 When I was in kindergarten, this was my basic traveling outfit… topcoat and fedora.  I miss the times when everyone wore hats… ones that don’t come with a bill.

On occasion, when a snappier look was needed, I had this in my arsenal. 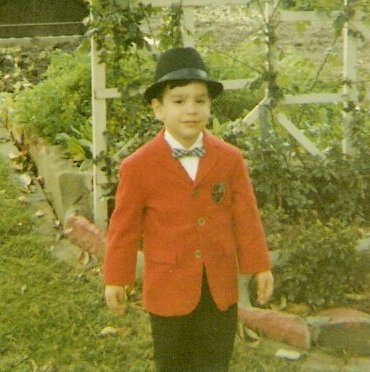 I totally looked like I should have been coaching the 1965 Montreal Canadiens.  Scotty Bowman stole my look.

Next thing you know, it was the hippy-dippy 70s and we dressed the part… ALL the parts.  First we were peaceniks. 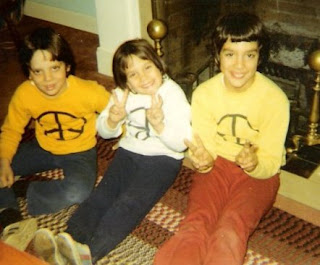 Too bad my red blazer didn't fit any more, because it would have went with my red pants.  I’d have looked like a giant lipstick.

The mid-70s brought the loud plaid pants, like the kind Herb Brooks wore in ‘Miracle.”  This is me with my Uncle Ange, on my confirmation day. 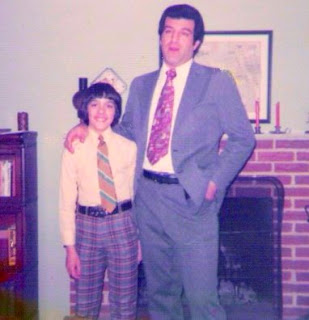 I’m not sure whose idea it was to put me in a striped tie to go with my plaid pants, but I think that counts as a venal sin.

Luckily, it wasn’t just me that got tagged with the plaid pants.  They got my brother too, otherwise I’d have to conclude that my parents were out to get me.  (As if withholding Pop Tarts and sugared cereal wasn’t enough.) 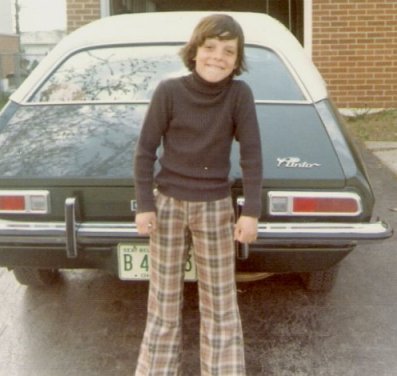 Plus, we had a Pinto.  My brother had to be very careful not to back up into it.

Ever since my first 4 years of Catholic school, I always rebelled against wearing ties.  So for my National Honor Society induction, I tried to find some kind of suit where I wouldn't need a tie.  Unfortunately I came home with this. 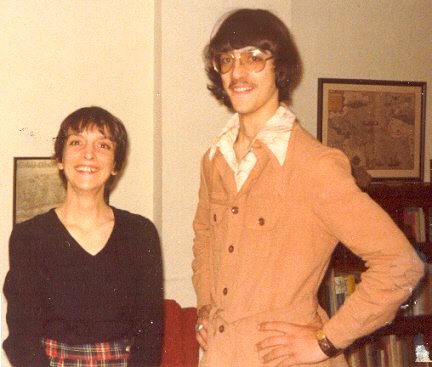 That was one of my 70s Disco Fever silk shirts under a crinkle-cloth safari jacket and matching slacks.  I’m surprised they even let me into the NHS dressed like that.  At least I had good hair that day.  And how cute does my mom look?  That has to count for something.

I mentioned my first "real" suit in a prior post (wherein I got smashed at my buddy’s wedding reception and rolled down the cement stairs while trying to help carry out a keg).  That had only been the 3rd time I’d worn the suit.  The first was my senior prom.  You can see me in it here, as I inadvertently photo-bomb my buddy’s moment. 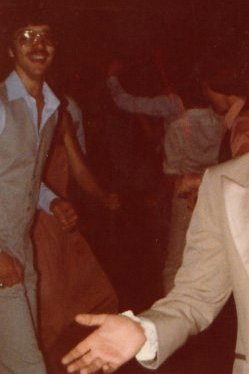 I appear to be dancing… the White Boy Shuffle, I think.  Cat Deeley would have loved me.  And vice-versa.

Remember the shorts in the 70s and 80s?  I miss those.  I've railed on this before, but I hate the current “shorts down to your Achilles” look for shorts.  As I always say, when you legs look as good as mine, it’s a shame to cover them up.  See? 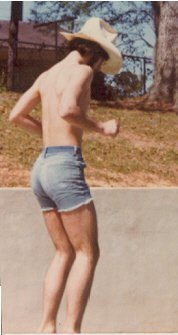 No, I wasn't doing the Funky Chicken, I was bouncing on a diving board.  This was down in Georgia, (hence the cowboy hat) visiting my buddy Billy; spring break of our (college) freshman year.  Damn, I was skinny.

While I was in Georgia, I picked up what became known as The Legendary Valdosta Shorts. 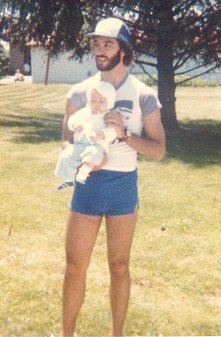 I wore those for ages… or at least until I could no longer wedge my big ass into them any more.  This shot was from 1981 and I was holding my cousin Greg.  He is now 6’5” and the father of 2, which makes me very, very… old.

Another thing I brought back from Georgia was a taste for western wear.  It was the days of Urban Cowboy and I bought into that just like I’d bought into the disco shirts.  This was me at a college party. 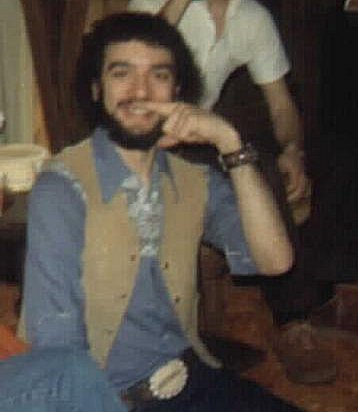 Rawhide vest over a paisley-yoked cowboy shirt, with a saucer-sized “Skoal” belt buckle and a bad perm.  I consider it child abuse that my mom let me out of the house looking like that.

Oh, and that hand gesture?  No, it’s not a “smell my finger” move.  That was the move we did to signify going incognito.  It was something we did when we were up to no good.
The finger was supposed to infer a mustache disguise.  You can see my buddy behind me doing it as well.  Just dudes being stupid… so what else is new?

Don’t think I neglected footwear when committing fashion atrocities.  When my brother found a pair of bright red high-top sneakers, I wanted a pair too.  But the store was out, so I came home with these: 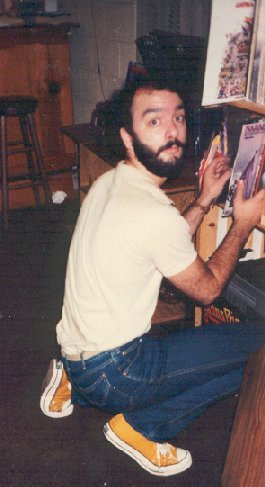 When I put these in my room at night, I didn't need a nightlight.

In the late-80s, my dad obtained company tracksuits for all of us. Here, I’m wearing the bottoms of my Soprano Guido tracksuit.  It came with a matching jacket.  Now imagine a whole family gathered together, wearing these things out shopping.  We looked like a cult.  At least I never wore the gold high-tops with mine.

I know I have other pictures of me in the act of committing additional fashion crimes, but I’d have to look for them photo albums and scan them.  (Meaning it would take some effort.)  These were shots I already happened to have on my PC.  But I think you get the idea.

I think I deserve some kind of Weekly Whacked Lifetime Achievement Award.
Posted by bluzdude at 10:45 AM