I Knew the Bride

Wow, what a wonderful, wicked, wobbly weekend, which included a wedding, a stay at a luxury hotel, and a day spent at the bar.

First off, as noted in the previous post, my friend Jenny married the man of her dreams in a beautiful ceremony with a reception down at Baltimore’s Inner Harbor. 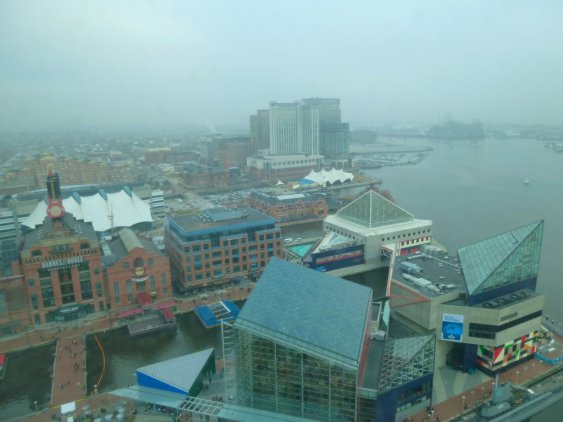 View from the 21st floor (where the reception was) looking at the National Aquarium, Barnes & Noble and the Hard Rock Café. 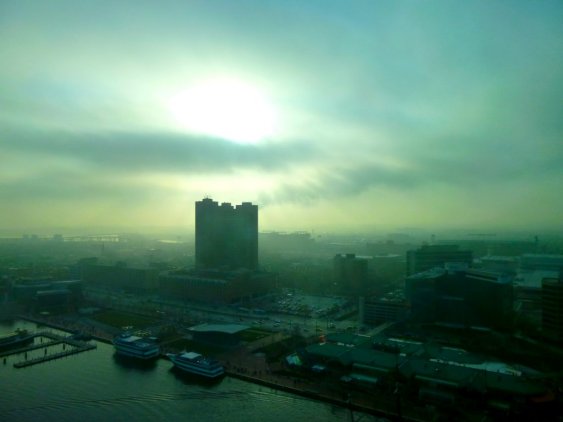 This was looking out in the other direction. 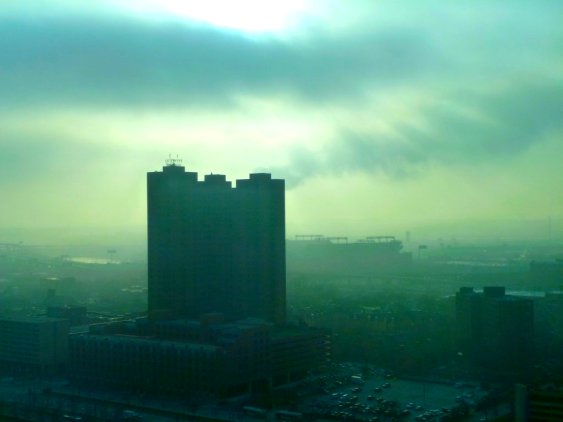 Closer view.  The fog and clouds made the view rather foreboding.  Although it could be because that’s the Ravens’ Stadium just to the right of the big dark building.

I’m not going to get into a bunch of details about the wedding… I know no one wants to read a bunch of crap about a wedding for someone they don’t know.  Suffice to say, the bride was a shimmering beauty and looked positively radiant.  Like I told her in the greeting line, "You look like you belong on top of a wedding cake.” 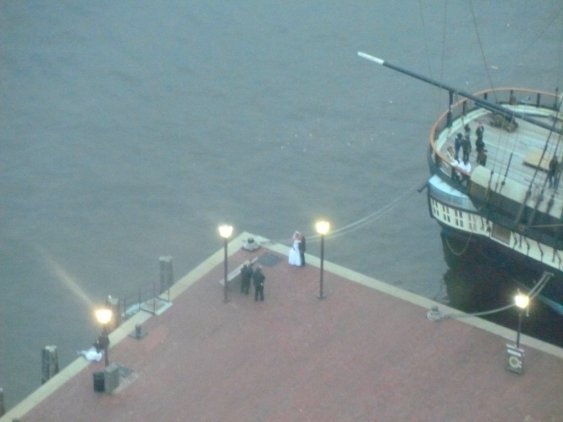 See?  You can even see the radiance from here. 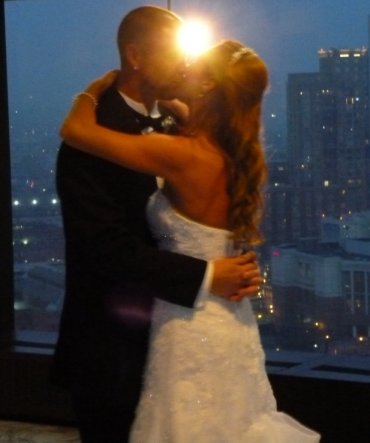 There it is again!

I also told the groom what I wrote in the last post, that he was the luckiest guy in the Mid-Atlantic.

OK, I know you at least deserve a decent look at the happy couple.  I did take a butt-load of pictures but the results left me a bit disappointed.  With the low lighting, any motion at all left me with blurred or fuzzy pictures, so I didn't get nearly the number of usable shots that I’d anticipated.  (Yes, yes, I know… I should get an SLR and go take some lessons.)

On the bright side, I was so busy messing around with my camera during the ceremony, I didn't have the time to get all weepy.  (Well, except maybe a bit when the bride’s voice wavered during her vows.)  Things came out much better when everyone was standing still, like at the cake-cutting. 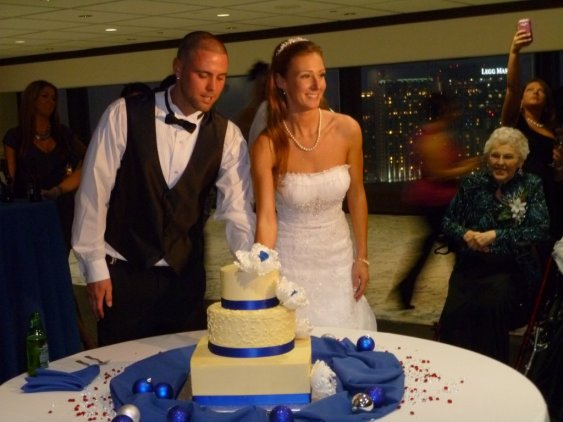 As a veteran of a whole bundle of weddings, I thought I’d seen all the best stunts, but I learned something new with this one.  It was brilliant.

Soon after we all sat down, the groom’s uncle came around to the tables.  To all the guys, he handed out these quarter-sized metal washers and said that these were “keys” to Jenn’s house.  After the toasts, he was going to go up and make a speech and tell all the guys that “now that Jenn is married, anyone with her house key needs to bring them up and turn them in.”  He had a metal coffee can for us to drop the washers in, so they would sound like a metal key plinking in.

So he made the speech and then about 40 or 50 guys got up to turn in their “keys.”  It was hilarious!  And then for a kicker, after all the guys were done, Jenn’s and my mutual friend Kristy scurried up and dropped off a key of her own.  And THEN one more old guy, who must have been in his 70s, shuffled up and dropped in the last “key.”  The whole routine just killed the room.  I can’t wait to pull this stunt on my nephew one day.

Back when my buddies and I each got married, our “stunt” was a ball and chain.  And I don’t mean some little thing; I’m talking about a big (hollowed out) steel ball, just a tad smaller than a volleyball, attached to a big, thick stock of chain, with an iron ankle clasp attached.  The thing was formidable.

I think my buddy John (VP of Hell No) made it (or had it made) and I know we used it when his son got married.  For my wedding, Rik (Chairman of Fuck Off) brought it out and to use on Future-Ex.  That didn’t go over real well with her, though, so she didn't have it on for very long.  They put it on me for a little while, but I had my new step-son carry it behind me.  Then finally we used it for my friend Brill’s wedding, after which it got thrown out when they moved.  So we’re due for a new wedding trick.

But because the “key” idea wasn't mine, I got to pose with this exquisite bride. 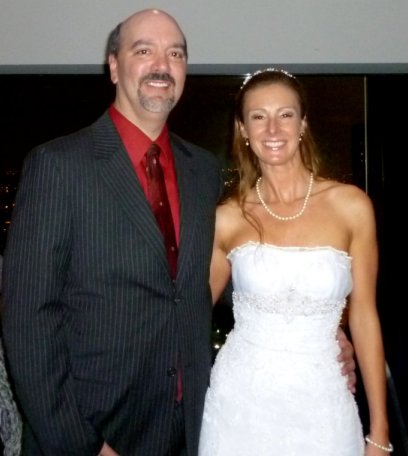 “I can see her now with her Walkman on/
Jumpin’ up and down to her favorite song…
She used to wanna party, she used to want go/
I knew the bride, when she used to rock and roll.”*

When the reception wrapped up, it was only 7:00, so there were still activities afoot, out on the town. 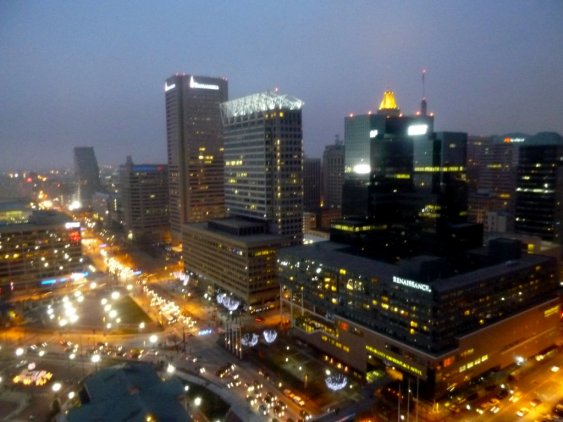 We got together with Jenn and some her friends at the hotel bar across the street (where Pinky and I were staying) for a short after-party.  It was nice because we could finally talk to the bride and groom without swarms of people pulling at her and photographers constantly circling and putting lights in our faces.

Rather than changing first, Jenn insisted on going out in her wedding dress.  She said, “I only get to wear this once, so I’m getting my money’s worth out of it.”

Not so much for the shoes though… 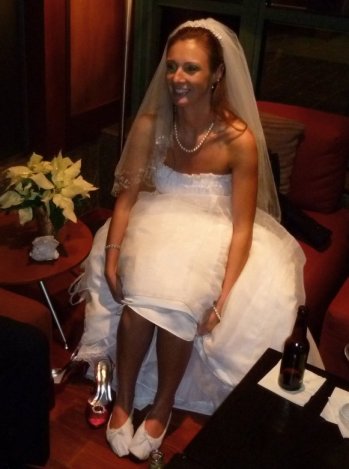 The Bride, changing out of her sparkly red pumps.

It was a great end to the night, as we got to see the happy couple off to begin their honeymoon and new life together with a sense of love and friendship.

We didn’t linger much the next morning because I needed to get home and change into my Steeler game apparel and head out to the sports bar.  The Steelers and Chargers were playing opposite the Ratbirds game, so it wasn't on local TV.

This time out, I was meeting Sunshine, who used to be my “work wife.”  It was funny because I’m always showing up at this place with a different girl.  They know Pinky because we have lunch or dinner there fairly often.  But for games, (which Pinky doesn't care for), I frequently meet up with Sitcom Kelly or Sunshine.

So when I saved the adjacent bar stool, the bartender said, “Oh are you meeting your lady friend again?”

I said, “Yes, but a different one this time…”  I had to laugh, because I could hear how that sounded.  I said, “It’s a different girl but she’s another ‘friend’ and the Redhead knows all about it.”  I said, “Bartenders have to keep our secrets though, right?”

I figure it’s like doctor/patient confidentiality, or attorney/client privilege.  Bartenders have to keep their mouths shut about what they see if they want people to come back.  The bartender, a nice English lady, probably about mid-60s, agreed.  I said, “But I’m not putting that burden on you, OK, this is on the square.”

Anyway, I hadn't seen Sunshine since my birthday last year, and we didn't really get much of a chance to talk then, so we had an awful lot to catch up on.  She’s a Cowboys fan and they were playing too, so for the 1:00 games, we just watched the Cowboys, Steelers and Ravens games.  Her ‘Boys won while my guys lost, so that was kind of a bummer, but then the Ratbirds lost too, which redeemed the day a bit.

(Note to Self: Don’t wear the black Polamalu jersey to the bar any more.  Bad mojo.)

A lot of people around us kept asking if we were together.  She’d go, “I’m married, but not to him.”  You should have seen the looks.  But it was really nice to spend some time with a good friend.  It’s not for nothing that I called her my Work Wife.  When we worked together, we were very close.  When the second games came on, we straight-up yapped through all of those, until we finally left around 7:00.  Seven hours at the bar will give you a good case of Barstool Ass.

But all in all, it was a sweet weekend.  I got to see a dear friend get married, hang out with another old friend to drink beer and watch football, and then go home to Pinky.

As I heard her tell some people at the wedding, “He’s pretty lucky I understand that all his friends here are women.”

And I am, at that.  How many girlfriends would be OK with my going out and meeting up with various women as often as I do?  In fact, consider my trip to Pittsburgh last June, where I met up with two girls (Sitcom Kelly and her sister), and had dinner with a bunch of other female bloggers (Cassie, Jessica, Bethany, Facie and Ginny).  Granted, most of them brought their husbands, boyfriends or kids, and thank goodness for the Carpetbagger, or else I could have been on shakier grounds.

So remember, when we’re out and I’m taking pictures of everyone, it’s not because I have a thing for pictures; it’s that I want exculpatory evidence!

*Director’s DVD Commentary: “I Knew the Bride When She Used to Rock and Roll” is a song from the 80s by Nick Lowe.  Huey Lewis plays harp on it too.  Look it up; it’s a classic.

Oh, and I’m not collecting evidence because Pinky demands it.  I just feel better if I can corroborate that I’m doing what I say I’m doing.
Posted by bluzdude at 6:51 PM