It occurred to me this morning, as I was putting in my contacts, that I should probably be dead already, by my own hand.

I don’t mean ‘intentionally’ or anything; it’s just that I violate things like “conventional wisdom” and “safety precautions” as a matter of routine.  Take my contact lenses, for instance.

The warnings say I should put in a new pair every month or I may risk an eye infection.  I’m also supposed to empty and dry my lens case after every use.

Bah!  I keep my contacts for at least 2 months, or until I notice they don’t feel so fresh any more.  That takes my 6-month supply and turns it into a 1-year supply.  As for my contact case, I replace the saline every other day and rarely dry them out.  And do you know what?  I’ve been wearing contacts since 1980 and have had zero eye infections or any other eye problems.  Well, besides my vision deteriorating, but that’s just the onward march of time.

Food safety is another thing.  Pinky is all about food safety, having worked for the county as a kitchen inspector for assisted living places, and I regularly ignore and refute just about everything she tries to put into place at home.  Like leftovers…

She packs all the leftovers up into Tupperware containers and has them in the refrigerator within minutes of the end of dinner.  And if I don’t eat them within a day or two, she threatens to throw them out.

I say “threatens” because that would start WWIII.  The Dude does not tolerate wasting food under any circumstances.  Well, if it does indeed spoil, then that’s the exception.  But the thing is, during my bachelor years, I’d keep stuff in the fridge for ages and still eat it.  And I didn’t even HAVE Tupperware… it was more like a bowl with foil on it.

Same goes for leaving food out.  I can remember when I was growing up, Mom used to make the traditional Friday night Mrs. Paul's and Mac n’ Cheese.  After dinner, the macs stayed in the crock pot on the counter, and any leftover fish sticks were put on a small plate, where they stayed overnight.  Most times, I’d eat the fish sticks for breakfast the next morning.  (Leftovers don’t usually last long in a house containing a teenage boy.)

But the thing is… I didn't die, I didn't get sick, and I didn't get the runs… nothing.  It was the same with other simple foods that don’t necessarily require refrigeration, like cakes, breads, cookies, peanut butter, and whatnot.  We never kept that stuff in the fridge and none of us were any worse for wear.

Pinky and I used to go round and round about meat preparation too, especially with pork.  She was still laboring under the misconception that you have to cook the shit out of it or else you’ll get worms or something.  I insist that you can cook pork so that it remains juicy and not tasting like shoe leather, without facing mortal peril.

All I can say is that I've cooked juicy pork chops for 20 years, and have never become ill from it.  In this day and age, The Pork Menace is a myth, left over from when transporting meat in unrefrigerated trucks and rail cars was common.  That’s no longer the case.  Luckily, over the years I've been able to bring her on board the juicy pork wagon.

"Juicy Pork Chop Wagon" would make a great band name.  So would "The Pork Menace."

I know Pinky’s just trying to look out for me and I appreciate that.  But the fact is no one can convince me that “Action A” is harmful when I've been engaging in “Action A” for years without any measurable consequence.  I call that “hard-won experience.”

I am a firm believer in the 5-Second Rule.  Also, the 10 or 15-Second Rule, depending on how much I like what fell on the floor.  See that earlier rule about not wasting food…

I also tempt fate, apparently, because I am not addicted to hand sanitizer.  Sure, I have some on my desk at work, but I've had the same little 2-oz bottle for a several years and it’s only half gone.  I wash my hands a couple times a day, and I get an annual flu shot and take some standard cold germs precautions.  I didn't used to do any of that.  And you know what?  I still get a cold about once a year, regardless.  Perhaps there’s something to be said for a childhood spent playing in piles of dirt.  I bet my immune system could fight off the Cloverfield monster. 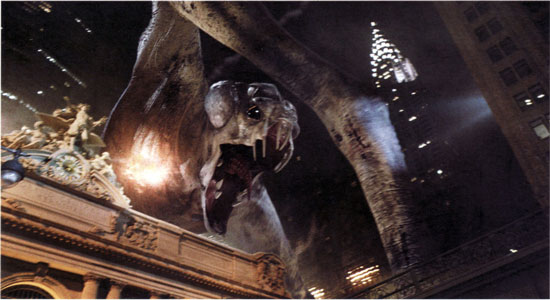 “Did you see the size of those T-cells?  I’m outta here…”

Earlier this week, I had to pluck out an eyelash that was growing out of the corner of my eye and Pinky gave me a 5-minute dissertation on how to sterilize the tweezers before and after plucking.  I ignored all of it and just yanked it out.  I figure, the tweezers only touch the eyelash, which is then discarded, what’s the problem?  If I stick the tweezers into my eye, I’m going to have bigger problems to worry about.

It takes an act of Congress to get me to go to the doctor.  Pinky is always on me to go get something checked… blood pressure, blood vessels, cholesterol, bone density, colon integrity, you name it.

I’m one of those “If it ain't broke, don’t fix it,” kind of guys.  And when something does seem broken, my first response is always to see if it will go away on its own, before seeking medical attention.  I’ll wait it out for months.  You’d be amazed how often it works out just that way.

I do take vitamins and fish oil, but I don’t think they do any good.  I feel like I’m perpetuating a fraud started by GNC.  Every study I read says that vitamins don’t have any perceptible impact when they’re taken as supplements, as opposed to via daily meals.  But given my vegetable-deficient diet, I’d better hedge my bets.

I got rid of my bicycle last month.  It wasn't because it was an old racing 10-speed that was 25 years old, or because the tires wouldn't hold air any more.  It was because Maryland has a law that says even grownups have to wear helmets when riding a bike.  That was the last straw.

When I was a kid, bicycle helmets caused injuries, because any kid seen wearing one would get the living shit kicked out of them, just for looking like such a Nancy-boy.  Even now, I won’t wear anything more protective on a bike than a fortified baseball cap.

You know what the biggest peril I face is?  Sleeping.  Seriously, every time I wake up, I have to take a full inventory on what hurts.  Is it my neck? My back?  Shoulders or knees?  It’s always something.  Next thing you know, I’m going to have to wear some kind of special helmet to bed.

My next most dangerous activity is stretching.  If I stretch too vigorously, I’m liable to produce a stabbing pain in my vertebrae, causing me to limp around for the next week.

Luckily, Pinky is a certified massage therapist.  She puts me on her table and straightens me right out.

That’s one time I’m happy to put my health in her hands.
Posted by bluzdude at 6:55 PM