How to Become a Master Baiter

I was trying to think of something to blog about tonight that might be more interesting than the tour of the places I've sat in Camden Yards.  (Yes I know; the space is wide open.)

Because next month’s trip to see my buddies out in Farmville is looming, I was hoping we might do a little pond fishing, and I recalled a story I don’t think I've told you.

A while back, the guys and I were stationed in various spots around a large pond and were having a go at fishing.  The fish were biting, but were quite adept at stealing my bait.  Before long, I ran out of worms.  Just before I dug into my buddy’s tackle box for a lure, I spotted a cottonmouth snake with a frog in his mouth.

Frogs are good bass bait.  So knowing the snake couldn't bite me with a frog in his mouth, I grabbed him right behind the head, took the frog, and put it in my bait can.

The dilemma was how to let go of the snake without getting bitten.  So I grabbed my hip flask of Jack Daniels and poured a little whiskey in his mouth.  His eyes rolled over, he went limp, and I released him into the pond, without incident.  I carried on fishing, using the frog for bait.

A little while later, I felt a nudge on my foot.

It was the same snake… and he had two more frogs.

I have my Dad to thank for sending me that joke last summer.  I've been saving it for just the right occasion, like when I can't think of jack-all to write about.

If you couldn't tell that was a joke, you must not know me very well.  Do you think there’s any reality in which I pick up a poisonous snake, full mouth or not?  Not without a long-ass pair of tongs and some iron gloves, I don’t.  More likely, I’m making like Usain Bolt and high-kicking it around to the other side of the pond. 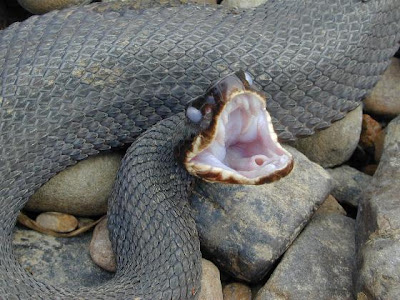 Yeah, I’m gonna pick this up… No freakin’ way.  Nothing says, “possessed,” like a snake with clouded-over eyes.  (Source)

All in all, it makes me wish I had some Jack Daniels in the house.
Posted by bluzdude at 7:16 PM