For some time now, I've been meaning to go through some of my old files.  Back when I first moved out, I bought this little file box at K-Mart, in which I could keep my Very Important Documents.  As it turned out my definition of Very Important Documents ran from my Social Security card and Selective Service registration, to bits of past writing, to newspaper and cartoon clippings.  It’s really kind of a time capsule for me, documenting the years from 1974 to 1997.

With the age of digital storage, the old file box is kind of a nostalgic anachronism.  I haven’t added anything to it since I moved to Baltimore.  (You know, where I got a computer and began storing documents electronically.)

Yesterday, I finally found the time will to go through it all and see if I might find some blog material.  I had a couple of particular bits of writing in mind I thought I might recreate for your amusement; I’d just have to find them.

But I learned something as I went through all those old nuggets.  I learned that I wasn't nearly as good of a writer as I thought I was.  Maybe it was the apparent pretension I see now, maybe it was the cringe-worthy inappropriateness of looking at old comic bits through the lens of the current sociological ethos, but it just didn't hold up.

Of course, what else should I expect from a time capsule?

I was particularly disappointed in a story I wrote in the late 80s, about playing sandlot football.  I was so proud of it at the time, and it’s a story I still want to tell.  I was hoping I could just drop it in here as a post, but it clearly needs a lot of work.  I’ll get to it, eventually.

I've previously written about getting into a blackboard verse/limerick war with my high school girlfriend’s older brother, in English Lit class.  (It was an important moment in developing my rep for wise-ass wit.)  In the post, I mentioned that I had some of my limericks, but I didn't know where they were.  Well, I found them in the file box, along with the ones I wrote with another dude during a boring college lecture class.  (We would alternate lines and write about people we didn't like.)

What I learned there was that my blackboard stuff was mildly amusing at best (although still worlds better than the other guy’s), and that the stuff with my friend was ragingly inappropriate for this day and age.  (And its own day an age; I just didn't know it yet.)  Sure, I’d laugh at some of the turns of phrase, but at the same time I was thinking, “OK, that’s never going to see the light of day…"

I found a bunch of old annual evaluations dating back to my record store days.  All that did was highlight how much I wanted to get out of that rat race, not knowing that I was just heading into a different one.  Not that they didn't contain some truth.  With some of the comments, I’d be thinking, “No, that was bullshit.”  Other times, I’d be like, “Yup, that was me… I still suck at that…”

I did manage to find one little nugget I was proud of.  Remember when I was writing about my retail career and I mentioned how in return for posting a local radio station’s billboard in the store, we would receive some free commercial spots?  Being a recent college graduate with a degree in radio, I would write the commercials and the station would produce them.  I posted the audio from my best one.

When I was going through the archives, I found a couple more commercial scripts I wrote.  One in particular, I thought was reasonably clever.  This was a pre-Christmas ad from November of 1985; a riff on the old Night Before Christmas classic.

‘Twas a month before Christmas
And all through the store;
Peaches shoppers were shopping
And asking for more.

With the Cars and the Starship
At $6.99
I knew that great savings
Were soon to be mine.

Aerosmith, Loverboy,
Heart, Kiss and Sting;
At $5.99
They made my heart sing.

(For brevity’s sake, I’m skipping a couple of stanzas about the glory of blank audio and video tapes.  Hey, YOU try writing something interesting about TDK SA-90s!)

My compact disc player
Was sounding just fine,
With Peaches whole stock
At $13.99.

There were jam boxes, head cleaners,
Headphones and stuff,
With prices so low
I just can’t get enough.

(Music fade up: Tina Turner, “But I Might Have Been Queen”)

But Tina was calling,
And Autograph too,
Both at $6.99
Just like old Motley Crue.

With WASP, Mr. Mister,
Marillion and Cure,
Peaches Records has got
The best prices for sure.

Now bring yourself over
And don’t you forget,
Your ‘RQN coupon
For the best savings yet.

You’ll find it at Peaches,
Your Christmas-time pick
On South Reynolds Road,
Just south of Southwyck.

It’s kind of funny just seeing a list of all the bands that were popular at the time.  Some have held up, others, you’re like, “Who?”

One of the other things I realized in going through the file box was that I lived in an epic era for newspaper cartoons.  I had tons of them stashed away, mostly The Far Side, Calvin and Hobbes, Doonesbury, and my favorite Bloom County/Outland/Opus.  (Only Doonesbury is still running today.)

I found a clip of what may be my all-time favorite comic.  It was a Sunday strip of “Outland” from 1993.  “Bloom County” was a huge favorite of mine in college, before the author rejiggered it into “Outland,” which eventually begat the Sunday-only “Opus.”  I couldn't believe that this clipping still looked as bright and fresh as if I ran in the paper today.  Most of my other clippings had grown faded and brittle.  Maybe the Albany Times-Union used better newsprint.

Anyway, here is a look at a strip that was controversial at the time, but remains as true now as it was then.  Sometimes the truth hurts… 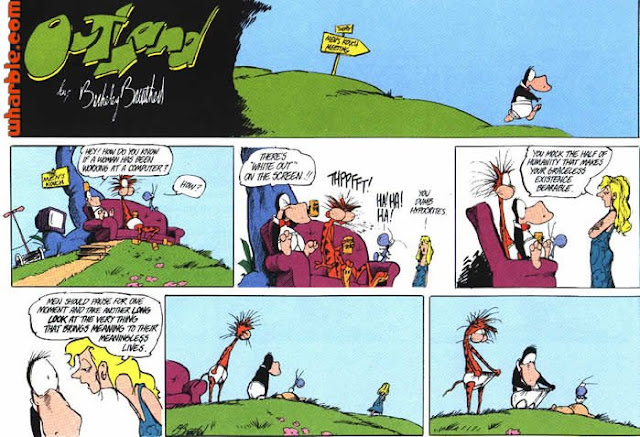 (Click the pic, to embiggen for easier reading.)
Posted by bluzdude at 12:57 PM