Now then, let’s carry on with the fascinating story of my vacation last week.  I already covered Monday through Wednesday in the last post.

Thursday
Our “big event” for the week was when Rik the CFO, his son Jacob and I went up to Detroit to see the Tigers play the Los Angeles Angels at Comerica Park.  I’d been there once before and knew it was a beautiful ballpark.  The only problem was getting there in one piece, because unfortunately, the park is surrounded by, well, Detroit.

One of the things the park has going for it is all the tigers.  I mean, they’re everywhere.
Like other new ballparks, Comerica Park has a low outfield wall, so fans can get a view of the city.  The only problem is, rather than featuring a beautiful downtown like, say, PITTSBURGH, 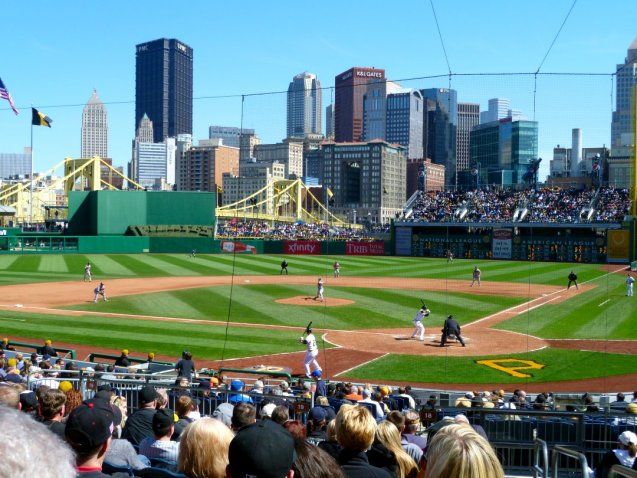 here, all you have to look at is… Detroit.
Jake was hoping to shag some batting practice home run balls, so we got to the park right when they opened the doors.  Unfortunately with this being a day game following a night game, with a 1:00 start, no one actually took any BP.  So that left us plenty of time to wander around.

The first thing I wandered over to was the stand selling bacon-wrapped hot dogs.
Comerica Park also has a series of statues commemorating their Hall of Fame players, out behind the left field wall.  I took a couple of shots, but I like this one best.
They had a bunch of stuff for kids to play on, but we found something more appropriate for Jake to try out… a radar gun.  I think he was the first one to use that day. 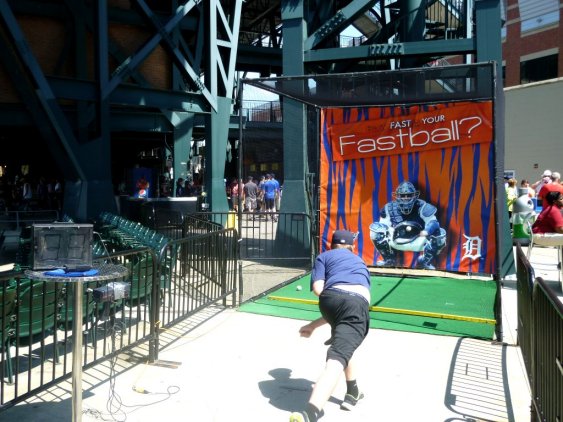 Because it was warming up, we took any opportunity to find shade, or better, air conditioning.  That led us to the Tigers merchandise store.  I felt kind of funny walking in though, just because of the name. 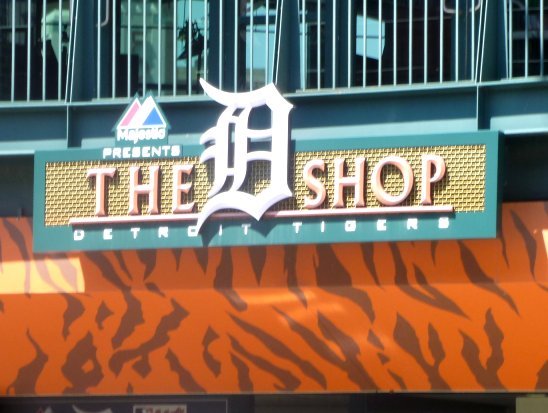 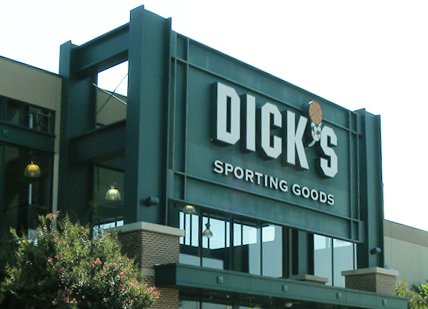 Our seats were in the 4th row, down the 3rd base line.  When we finally decided to go sit in them, we were met by the Tigers’ Welcoming Committee:
Going to a day baseball always seems like a good idea, until you get out there in the sun.  Game time temperature was only 79-80 degrees, but when you’re just sitting out there with the sun beating down on you, it gets a little steamy.  Luckily, my nephew Daniel taught me a good trick a number of years ago:
Don’t ask me what how I arrived at using the mojo of a Toledo Walleye shirt and Baltimore Orioles hat at a Tigers game.  Some things you just have to take on faith.  But no one hassled me about the O’s hat… they were probably too concerned with keeping Miguel Cabrera sober for the playoff run.*

*Yes, I know.  Only Rik and Carpetbagger will get that joke.

Lucky for us, some clouds finally started to pass around the bottom of the 4th, so we got a little shade relief.  It was a close game, which took a 1-1 tie into the 10th inning, before the Angels won it 3-1.  This was our view of the game:
The problem with sitting up close throughout a close game is when it’s over, you’re all jammed up getting out.  When I go to a game by myself, (or with Sitcom Kelly) I usually watch the last inning from the outfield standing room area, so that after the last out, we breeze right out the door.

This time, it took us a good while just to get out of the ballpark.  Traffic outside was insane, because not only was the game letting out, it was about a quarter to five, so the dozen or so people that have jobs in Detroit were leaving work.  There was also a big rainstorm blowing up on the horizon.

It’s funny how your perspective on traffic changes depending on where you are.  For example, when we were trying to get out of the parking lot and into the street, we were like, “I hate these damned assholes that won’t let anyone in.  Can’t they see we've been stuck here for 15 minutes already?”

Then once we’re out on the street, after sitting through 5 or 6 red light cycles without moving, we’re like, “I hate these damned assholes that keep pulling out in front of us.  Can’t they see we’ve been stuck here for 20 minutes already?”

To make thing worse, the CFO’s car isn't built for guys my size.  It’s like sitting in an airplane seat, only with less legroom.  So it wasn't a good environment for Zen-like tranquility.  Luckily Jacob, who had even less room, in the back seat, is a teenage boy and as such, has joints and ligaments like Gumby.

Anyway, we made it home more or less unscathed, and walked right into the roast beef John had done on the grill.

I’ll cover Friday’s events in the next post and put a wrap on the week.
Posted by bluzdude at 7:58 PM

Email ThisBlogThis!Share to TwitterShare to FacebookShare to Pinterest
Labels: Bluz LIfe, Stories and Misadventures, The Glory of Meat, The Mojo Boogie