I just restocked the freezer, this weekend, with another order of Omaha Steaks.  So you know what that means… beside the fact that we get to eat really well this week?  As you may recall from a prior blog post or two, along with the meat potatoes, Omaha Steaks also sends a little packet of “Conversation Cards,” meant to stimulate lively conversation at the swanky little barbecue they’re sure you’re having.

I don’t have swanky little barbecues; I have a blog, for which I’m always sniffing around for ideas.  So when UPS delivers a blog idea directly to my front door, it’s only natural that I use it.  So let’s go to the cards, shall we?
Q1: Have you ever skinny-dipped?  Yes… neighbor’s pond, during a late-night Barn Party.  There was a whole group of boys and girls; mostly my brother’s friends.  I just kind of tagged along on the periphery.  Nothing much happened, just a lot of jumping off the dock and splashing around in the dark, right up until my brother dove under water with a flashlight.  That scattered the girls pretty well.  The boy killed the Golden Goose right there…

Q2: What is your favorite season?  OK, they’re duplicating.  I believe I've answered this one before, but my favorite season is the Fall.  I love the cool nights and crisp air, Halloween, bright colors, the start of football and hockey seasons, and my birthday.

Q3: What movie could you watch over and over again?  Lots of them!  I watch all my favorites repeatedly; that’s why I have them on DVD.  And I did a whole post about movies that when I happen upon them on TV, keep me up late waiting for “That One Part”.  The main culprits are Forrest Gump, Jaws, Aliens, Harry Potter, Die Hard, Indiana Jones(es), Star Wars(s), The Godfather, Airplane, Naked Gun(s) and Blazing Saddles.

Q4: If you were given a million dollars you had to give away, how would you do it?  I’d spread most of the dough around to various friends (in need or otherwise) and relatives, and send the rest to do-gooder organizations I believe in, like Planned Parenthood, and the political causes I support like Move On and the ACLU.

Q5: If you could be any age, what would you be?  I used to say 22 was the perfect age (back when I was 17-18).  I figured, you were “legal,” with some to spare, but still young, lean, and indestructible.  I would still go back to 22, but only if I could keep my current knowledge and experience.  The downside of 22 is that you’re often still a pinhead.

If I had to embrace the complete package, I’d probably say 35.  I was still a pinhead, but much less so, and I hadn't started with any of that shit with hives or irregular heartbeat.

I’m assuming that when they say “any age,” they mean any age right now, and not by going back to the past.  In that case, as I've said before, I’d go back to being 17 in 1979, and relive my wild days of footloose and fancy free.  (That way, I could bring my own flashlight to the skinny-dip.  Also, buy Microsoft stock.)

Q6: If you could star in one movie, what would it be?  And what part would you play?  I can think of many options, and they would all be because of what I’d get to do with my hot co-star.  I guess I’ll go with Michael Douglas’s role in Basic Instinct.  You should see what he got to do with Sharon Stone that ended up in the DVD outtakes.  I’m surprised if he even asked for a paycheck.

Third choice, and totally un-babe-related, any role in any Mel Brooks movie, just because I know I’d have the best time and laugh constantly.  Maybe I could combine things and do Gene Wilder’s role in Young Frankenstein, because I’d get to make out with Teri Garr, plus hang out with Madeline Kahn and Marty Feldman. 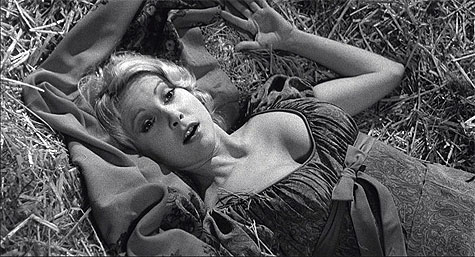 Q7: If you could change one thing on your body, what would it be?  Easy… hair.  I’d elect to keep my hair past the age of 24.  Being this bald and that young at the same time was really tough to handle.

Q8: If you saw a stranger with toilet paper stuck on their shoe, would you tell them?  Tough to say… it depends on the situation.  Out in public, I’m usually in my own little world.  I rarely talk to anyone, nor do I even notice anyone for that matter, so no, I doubt I’d say anything.

But if I was in my office building and saw someone I didn't know trailing some TP, I’d probably say something.  At least then I’d know it wasn't some crazy person who thinks it’s a footwear accessory.
Posted by bluzdude at 6:45 PM

Email ThisBlogThis!Share to TwitterShare to FacebookShare to Pinterest
Labels: Bluz on Film, Goofy Shit, The Barn, The Glory of Meat