Before I went on vacation, I was running down the various concerts I’ve had the good fortune to be able to attend, so I thought I’d pick it up again tonight.

What, you think I can do 3 sensitive, insightful, reflective posts in a row??  Bah!

I left off as I was just entering my second year in Cleveland, and was really starting to get the hang of these things…

9/23/87 – Boston, Richfield Coliseum, “Third Stage” tour. ($18.00 comped)  I was thrilled to be able to see these guys… Their debut album was one of my all time favorites, and it had only been seven years since their previous album release.  Granted, the band was basically Tom Scholtz, and the singer Brad Delp, with a bunch of other random schmoes, but the “Boston” sound was still perfect.

I had a chance to go and meet the band, but the record label rep only had one backstage pass left, and I was there with a friend, so I turned it down.  Instead, I gave a full-page concert advertisement to another friend, who was able to get it signed for me.  I had it framed and it’s still on my wall. 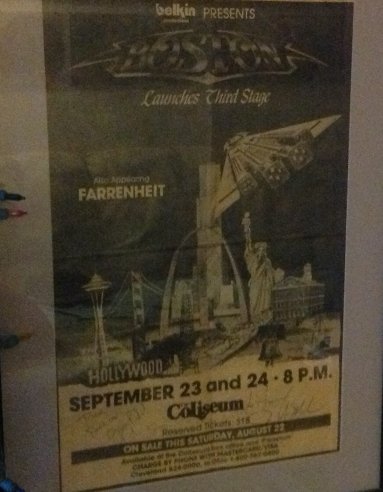 Unfortunately, the only thing I had with me to document the night was a pocket-sized notepad and pen that I used to chart the set list, so my autographs weren't on anything cool.
Not only did he sit and tell Rik and I the entire story of the Lynyrd Skynyrd plane crash, he called over everyone else in the band to come sign my stupid little notebook.  He was a great guy, may he rest in peace.
Rik chased her down for me, because I wanted to ask her about a duet she sang with Meat Loaf.

After this night, I started taking my camera with me a lot more often, because I just never knew when something big might happen.

November 1987 – Roy Buchanan, Barney Googles, “Hot Wires” tour. (guest-listed)
I loved going to shows at the smaller clubs.  Barney Googles was basically a hotel ballroom, but they drew a lot of good blues shows.  Roy Buchanan was one of the best guitarists ever; sadly not many people knew about him.  Dude could really make that guitar howl.
2/4/88 – Albert Collins, Barney Googles, “Cold Snap” tour.  (guest-listed)
My brother came out to visit me for a weekend, and we went to two shows in two nights.  The first was bluesman Albert Collins, who is most often known for his role in “Adventures in Babysitting.”  (He was the blues guy who told the babysitter, when she and the kids ended up on his stage, “No one leaves this place without singin’ the blues…”
I would have had a pic of the two of us together, but my brother refused to come up to the stage and take it.  I wrote about that here.  Albert was really nice to me though, a gentle soul who is still missed in blues circles.  RIP.

2/5/88 – AC/DC-White Lion, Richfield Coliseum, “Blow Up Your Video” tour. ($16.00 comped.)  AC/DC never disappoints; they ALWAYS rock your face off.  I was glad I could get my brother out to see them, because after all, he was the one that first brought their albums into the house.

3/29/88 – George Thorogood, James A Rhodes Arena, Akron, “Born to be Bad” tour. ($15.00 comped)  I had to go all the way to Akron to see George this time, because he didn't play Cleveland on that tour.  Totally worth it, though.  He always is.  As I always say, if cavemen played rock music, they’d play George Thorogood.

May 1988 – Johnny Winter, Peabody’s Down Under, “Winter of ‘88” tour. (comped)  This was a hellacious show.  Johnny Winter is another lightning-fast blues guitarist, with a Pee-Wee Herman yell.  He’s not complicated… He yells, mumbles a few lyrics, yells again, and tears off a 48-bar solo.

It really was an amazing show.  Say what you will but the guy was an all-time great performer.  It was like part concert, part magic act.  RIP.

10/23/88 – Joan Jett/Robert Plant, Richfield Coliseum, “Up Your Alley” tour.  OK, Robert Plant wasn’t technically opening for Joan Jett, but that’s how it was in MY mind.  I’d already met Ms Jett twice by this point, but this was the first time I got to see her perform.  Girlfriend tore it up!  I just wished she got to play a little longer than the “opener” slot allowed.  I’d come straight from a Halloween party, and as soon as she was done, I took off back to the party.  No way Robert Plant tops a Joan Jett show… 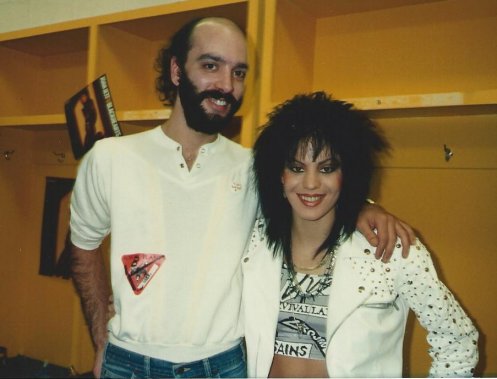 Hanging with Joanie before she went on.  Like a BIG dog… Rowlf!

You can see the full story of all (5 of) the times I got to meet or talk with Joan Jett, here.

12/11/88 – Georgia Satellites, Peabody’s Down Under, “Land of Salvation and Sin” tour. (comped)  I loved this band and was so happy for the chance to see them, especially in a small club like Peabody’s.  They had way too much sound for that little place, but I tell you, there is always a home for 3-chord garage rock.  I don’t know why I didn’t bring my camera for this show.  I was certainly standing close enough for good shots.  I probably couldn’t afford the film.

2/12/89 – Lonnie Mack, Peabody’s Down Under, “Second Sight” tour. (guest-listed)  Another great blues guitar show, from a blues guitarist that few people know.  Lonnie plays a big “Flying V,” with speed and ferocity, and has a big, booming blues voice.

Yet he was really cool and down to earth with us, as we shared cold cuts backstage after the show.
To be continued…
Posted by bluzdude at 8:17 PM