Yes, this is another baseball post, but as you’ll see, it has practically nothing to do with baseball.

Remember earlier this spring, when due to unforeseen circumstances, I found myself roped into going to two Orioles games back to back?  Well, the same thing just happened to me again.  I saw the “Birds” play the White Sox, both Thursday and Friday nights.

Early last month, Pinky’s brother acquired 4 tickets for Friday’s game, and asked us to go.  (Like I’d turn down a night at The Yard?)  So we’d been planning on that for a while.  Then on Wednesday, Sitcom Kelly told me she scored her mom’s company seats, 10 rows behind home plate, for Thursday’s game.  (Like I’d turn down free primo 10th row seats?)  So there I was again, booked into consecutive nights of baseball.

I know, it’s not like I’m suffering here.  I’m just saying I prefer to space my ballgames out a bit more evenly.  Oh well…

Now, there was a good reason why Sitcom Mom’s seats were available.  Thursday was the Baltimore Ravens opening game.  As Super Bowl champions, Ratbird-mania was at a fever pitch.  Because they couldn't open their season at home, (owing to a scheduling conflict with the Orioles), they played the game in Denver, but still had festivities here in Baltimore.  Keith Urban played a free, pre-game concert from a floating barge in the Inner Harbor, which was followed by fireworks.

So the demand for baseball tickets wasn't very high.  However, it was perfect for Ratbird-hating, Orioles-loving fans like Sitcom Kelly and I.  In fact, as I waited for Sitcom Kelly at The Bullpen, our customary pre-game watering hole, I realized I basically had the entire top floor to myself.
Not even the Free O’s Baseball Cap Giveaway was enough of a draw to fill the seats.  I have to take a small issue, though.  (Yes, I’m going to complain about getting free stuff.  Bear with me.)

This was the hat they gave away: 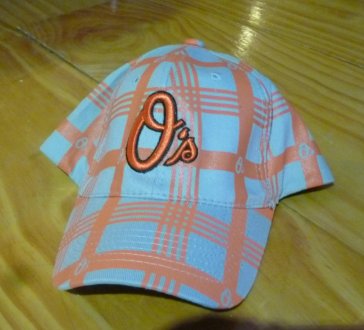 Does that look like a “man’s” hat to you?  If they were going to go plaid, I think they should have made it bolder, like orange lines on a black hat.  The orange kind of fades into the gray.  It’s pretty weak.  Personally, I think the only time one looks manly while wearing plaid is in a case like this:
Anyway, they gave the hats to the first 10,000 people, and lo and behold, we were two of them, even though we rolled in 15 minutes before the first pitch.

When I wrote about the last time we sat in these seats, I pointed out how we were sitting right beside a group of major league scouts.  The scouts were there again this time.  One of them even brought his own radar gun.  I guess he doesn't trust the home team radar readings.
The attendance was as anemic as I anticipated.  They announced it as 17,383, but that’s paid attendance.  I’d be surprised if they drew more than 12,000 butts in the seats. 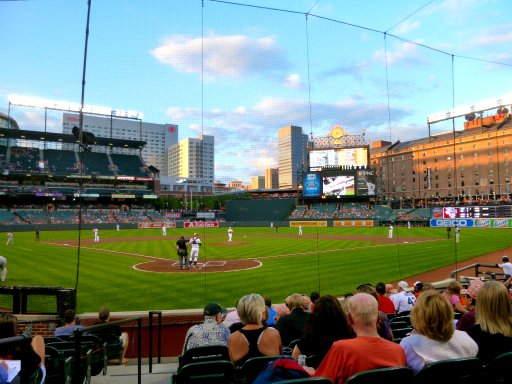 Like me, Sitcom Kelly also brought her camera to this game, but was soon irritated by the same thing I was, in that even though we had great proximity to the ballplayers, the protective netting prevented any quality photographs.
So, given that we had legitimate access to the hoity-toity seats, and the loads of room all over the ballpark, somewhere around the 7th inning we decided to swing over a bit and sit in some open seats behind the Oriole dugout.  We stared out in the same row we were in before, but within an inning, we moved up to the second row.  Now THIS was much better. 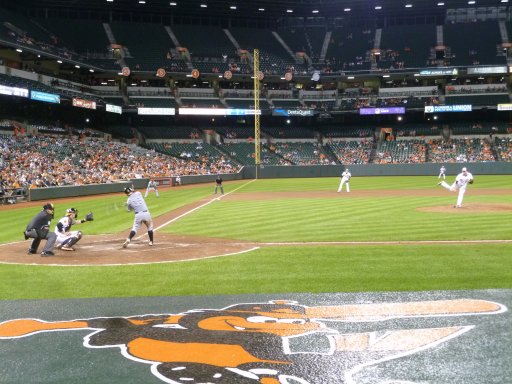 Well, better as long as no one smokes a foul ball in our direction.

From our new vantage point, we could zoom in unobstructed.
I was quite happy with a 2-shot sequence I took in the top of the 9th, with the O’s leading 3-1.  The closer was in and the White Sox slugger Adam Dunn was up to bat.
After the game, we hung around a bit, to watch the players come into the dugout.  We both got some more quality shots, but I’m sure Sitcom Kelly will be pleased with this one I got of her newest athlete heart-throb, relief pitcher Darren O’Day.
At one point, someone from the dugout tossed up a couple of handfuls of gum, from the giant tub of it they keep in there.  By this time, there weren't any kids around, and no one was really hunting for it, so I scooped up a bunch of it.  So if you ever wanted to know what major leaguers chew, (besides tobacco), here you go…
I tried a piece on the way home, hoping that Official Baseball Gum had some kind of superior quality to it, to which we mere mortals were not privy.  The conclusion: Meh…  It’s just gum.  But as a major league ballplayer, when your first piece loses flavor after 20 minutes, you can just grab another piece.

It was a real short game, finishing up in 2:45, and coupled with the lightning storm that delayed the Ratbirds game, I got home in time to watch the start of the 3rd quarter, as Peyton Manning and the Broncos used and abused the Ratbird defense, winning 49-24.  (Mwa haa haaa.)  I hear that Ray Lewis thinks the lightning was a conspiracy against the Ravens between the NFL and Jim Cantori.

The Friday night game wasn't as eventful.  We sat in the 7th row in left field on a beautiful night, and watched the Orioles win, 4-0.
Like I mentioned, we got to see Chris Davis hit his 48th homer of the season, which was followed back to back by with another Matt Wieters.  None landed anywhere near us, however.

The Orioles are kind of a long shot to make the playoffs now, but that’s OK.  They've been competitive all year, so it’s been entertaining.  They couldn't say that in many years past.

But now, look what time it is… It’s… it’s… FOOTBALL SEASON!!  The Steelers’ first game will be on tomorrow, and today I get to see the Buckeyes, so I’m all set to burrow deep into the man-cave and watch me some football.

There aren't many plaid hats in football, I’ll tell you that right now.
Posted by bluzdude at 2:54 PM