Odd Bits - The Just for the Halibut Edition

Couple of things to talk about today…

Syria Killer
To bomb, or not to bomb, that is the question.  Or, take the Russian option.  A lot has happened on the Syrian front in the last day or so.

There’s been a whole lot of talk about the Syrian mess over the last month.  Up until now, I've tried to stay out of it, mostly because I’m of two minds.

On one hand, I’m as sick of war as the next guy (who’s not a defense contractor).  Neither side of this conflict is worth supporting.  On one hand, you have a ruthless dictator bent on maintaining a hold on power, and isn't above using chemical warfare on his own people to do it.

On the other side, you have the (mostly) Muslim rebels trying to overthrow him.  Trouble is, if they acquire power, we’ll have one more country that hates us.  Al Qaeda is already arming these rebels and will find an instant foothold if an overthrow is accomplished.

So it’s been a quandary.  But here’s where I come down…

After witnessing the horrific results of using chemical weapons, almost every country around the globe signed a treaty banning such.  Syria’s Assad broke that treaty, to devastating effect on its citizens.  There has to be consequences to that action, or it becomes a green light for every other despot who’s desperately clinging to power, to gas his opponents as well.  You think Iran’s not watching this scenario intently?

While it would be all well and good for the UN to step in here, Russia’s and China’s Security Council vetoes guarantee that it will not.  And our past misdirection regarding the need for the Iraq War has ruined credibility with most of the rest of the nations that might have otherwise helped us.  We’re the only ones left.

We’re the ones in the role of Global Policeman and this activity is happening on our watch.  We have to do something.  As much as we might wish it, we can’t pull our heads into our collective shells and pretend that foreign affairs are of no concern to us.  The global theater doesn't work that way.

I think sending a few missiles at Syrian military targets is the least we can do.  With this action, I’m assuming the President keeps his word that there will be no American forces on the ground.  That would change my thinking considerably.

I actually like that President Obama went to Congress for approval.  At minimum, it’s a savvy political move.  The Republicans are usually the war hawks, loving nothing better than using a war effort to funnel taxpayer money into the coffers of their Halliburton-style puppet masters.  However this would require them to publicly agree to something Obama wants, and that’s something to which they have become almost genetically opposed to doing.

If Obama gets approval, the GOP can’t complain about bombing Syria.  (OK, they will, but they’ll look like dipshits.)  If they don’t approve, they have to explain why Syria is different than Iraq, or Libya, or any other country we've bombed in the last 20 years.  So far, they seem to be trying to find a way to promote intervention, without actually approving the resolution.

However, all of this may become moot.  Due to a new variable where based on an off-hand remark by Secretary of State Kerry, the Russians offered to “encourage” Syria to surrender their remaining chemical weapons into a UN-monitored stockpile.  Syria has stated that they would agree to this, even though to this point they have denied owning any.

Personally, I could live with that, providing, as John McCain pointed out, we have UN oversight and a firm time table.  That means no obfuscation or playing for time.  If they don’t give up the goods, ALL the goods, the bombs are in the air.  I would also add that if we find so much as a fever blister on another Syrian, the next missile lands on the presidential palace.

If it works, the Russian Plan solves everyone’s problems.  No war, plus no more chemical attacks in Syria.  The Republicans still get to accuse Obama of letting Putin play the hero, but it’s not like they wouldn't find something to criticize in any scenario.  And of course Assad is free to kill the rest of his opponents with conventional weapons.

I’d just hate to be one of the President’s speechwriters today.  They probably had a finished draft of tonight’s address to the nation, right up until the John Kerry and the Russians flipped the table.  Oh well… Sam Seaborne and Will Bailey always got it done on “The West Wing.”

Subway Hate Revisited
I thought of another person I hate on the subway.  Here’s his letter.

To: Lazy Dude in the Aisle Seat Who Won’t Stand Up and Let me Out From the Window Seat
From: The Guy Who Has to Squeeze By Your Big Ass Just to Get Into the Aisle

Look, I've had a hard day too.  If I wanted to climb over things, I’d be out on a jungle gym somewhere.  So when you see that I need to get out, don’t just swivel your knees around, stand the fuck up, move into the aisle and take a step back.  It’s not hard… in fact I do it every single time, when I’m in your position.  The only conclusion I can draw is that you like having my ass in your face as I try to maneuver myself past your shoulders, elbows and backpack.  Enjoy my back pocket, Assface.  Better hope I didn't have the burrito special for lunch.

I’ll Have the Fish…
Get a load of the Pacific Halibut this guy caught, off the coast of Alaska.  As I looked at it, I could only think of one thing:
The fisherman turned down the offer of a voucher for another day’s charter, in order to keep his 231-pound catch.  I think he’s “gonna need a bigger bun”.  (Sorry about mixing movie references there.)

I wonder if there were any consequences from the environmentalists… 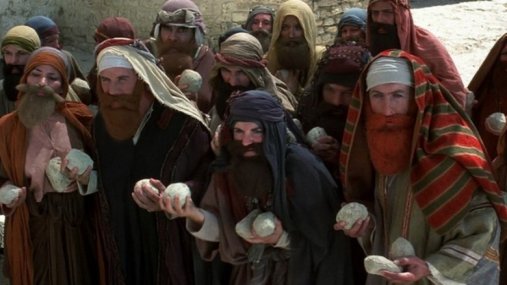