I haven’t been to a high school football game since shortly after I was IN high school, so it’s not something I expected to be writing about today.  But there have been three news stories about high school (and youth) football upon which I feel the need to comment.

It’s either that or write about Obamacare again.

Story 1: Players Father Levies Charge of Bullying After Son’s team loses 91-0.
I know we all want to be sensitive to the bullying situation around the country… we can’t afford to have any more jocks and popular kids shot up by pissed off nerds and goth kids.  But this is ridiculous.

This is Texas high school football, which is notoriously competitive.  The coach of the winning team was playing his third string throughout the second half.  He can’t very well tell his scrubs, guys who rarely get on the field, not to try their best!

The fact that this ass clown father is throwing the “B” word around here is offensive to every kid that ever got his ass kicked after school, or spent an entire school year getting flamed on Facebook.  This isn't bullying, it’s a competition, and his kid’s team lost.  If he can’t stomach that, he ought to put Junior in the marching band.

Better let him play the triangle.   Making him learn how to read music might be considered bullying.

Story 2: Football Program Declares “No More Participation Trophies.”
This one also takes place in Texas, and heaven forbid I ever agree with something that happens in Texas, but I agree with this.  The Keller Youth Association Football Program decided to end the practice of giving out participation trophies to all players.  They say it’s because awards should be earned.

I've mentioned it before that I've had it with handing out trophies just for being able to show up at a field, in a uniform.  In any sport, a trophy means something… it’s an award for individual or team performance.  If everyone gets the trophy, the trophy becomes meaningless. 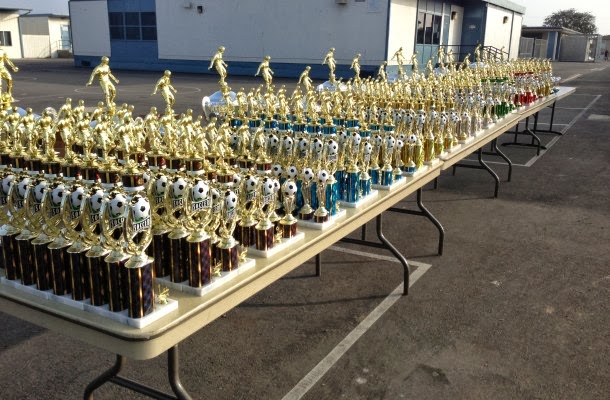 Now if the team or league wants to give out something else for Miss Congeniality awards, like certificates or medals or coupons for a free ice cream, then beautiful.  But there should be something special for the winners.  Life doesn't come with awards for attendance or mediocrity (politics aside).  The sooner kids realize that reward comes from achievement and achievement comes from effort; the sooner we’ll stop having to deal with snotty 20-somethings that think the world owes them a living.

I understand that parents want to bolster their children’s self-esteem and don’t want their feelings to be hurt.  I say everyone’s feelings get hurt one way or another.  If parents want to do their child a service, they’ll teach them how to deal with their hurt feelings, rather than trying to smooth out every bump in the road.

Granted, I say all this as Another Childless Douche.  But I’m also a lifelong non-trophy-winning douche, who never got squat for my attendance or honest effort.  And look how I turned out.

Story 3: Varsity Football Player Gets Kicked Off the Team for Writing a Poem.
This one comes from Ohio, where a varsity defensive end wrote a poem for class in which he was critical of the team’s quarterback and the QB’s father, the coach.  The poem called out the quarterback for throwing almost exclusively to his best friend, who was a wide receiver.  The problem was that the receiver frequently dropped the passes and shied away from collisions.  The writer also called out the coach for not curtailing it, despite the apparent negative effect it had on team morale and offensive production.

You can see the full poem by clicking the link to the story.

Although it’s not really much of a poem, (more like a disjointed rant), I don’t see where it rises to the level of suspension or discharge from the team.  It’s a class assignment, in which the point is to produce art by displaying the truth of what one is carrying inside.  Face it, not everyone is built to wax poetic about why America is the Greatest Country in the World.  Or why World Peace is Good… for the world.  Of peace.  Which is nice.

Sometimes kids see things the grownups don’t want to hear.  Sometimes it comes out in a fit of creativity.  As a school, you can’t ask for kids to bare their souls through creative writing, and then crush their dreams by disciplining them for what is uncovered.  That’s what a job in the Real World is for.

Sounds to me like this coach enjoys running his little empire and doesn't want some twerp upsetting the apple cart, upon which his pride and joy son-the-quarterback is riding into a college scholarship.  I’d be interested to know what the rest of the team thinks about the situation.  Will they rise to his defense?

Is the player telling truth to power, or is he just a whiner?

Maybe the problem was that the poem was too explicit, and not “poemy” enough.  Dude should have been more subtle.

Here’s how I would have done it…

Friday vortex of gloom crushes my soul
Balls out and balls on the ground
Balls always in the same place
Destined to bounce in one direction.

Are we not worthy?
Do we not also toil on the same turf?
Do we not bleed in the dirt?
Can’t we all play with our balls?

OK, so maybe I would have been suspended too…
Posted by bluzdude at 6:47 PM