Of Birds and The Burgh

In April, I wrote about getting boned on some Penguins tickets, when the Boston Marathon bombing upset the NHL schedule and the game I was to attend moved from Saturday to Tuesday.  I wasn't able to extend my stay in Pittsburgh, nor could I move the tickets, so it ended up a $300 shit sandwich.

This weekend, I got to see a little satisfaction, as Pinky and I hit The Burgh for a Pens game against Buffalo (who was the same opponent as in April).  This time, we stayed at the beautiful Omni William Penn.  The Penn is one of those glorious old hotels built in the 1920s, that just screams with the opulence of yesteryear.  After we checked in, we got a couple of beers and sat in the lobby for a while. 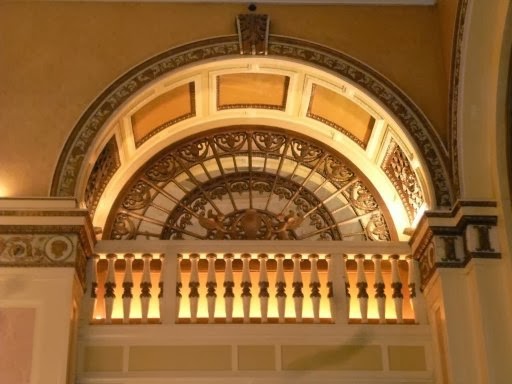 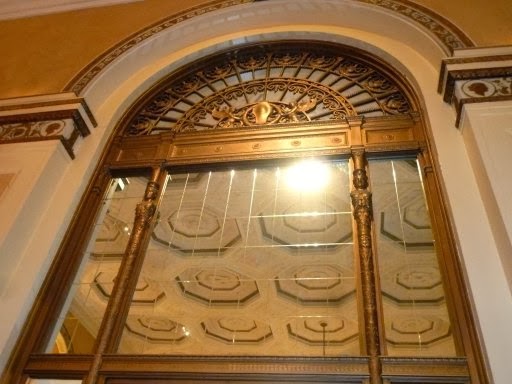 The ornately carved ceiling, as reflected by overhead mirror panes.

The room wasn't as large as the one I had for Podcamp Pittsburgh 5, but it was adequate.  Let’s just say, it wasn't commensurate with the lobby.  Of course if it was, I’d have spent the night smacking my head into the chandelier. I’d probably end up ensnared in it, like a fly in a spider web.

I was keenly excited to visit Consol Energy Center for the first time.  The last Pens game I attended was at the old Mellon Arena, which at the time was the oldest rink in the league.  Sure, it had loads of character, but boy, was it ever cramped, dark and dingy inside.

The CEC is the polar opposite of the old barn.  The corridors are wide and brightly lit, with loads of room to navigate.  I fell in love immediately, but then, I've always been a pushover for effective foot traffic management.

I’d been worried that our seats at the very back of the lower bowl would provide a limited view.  In similar seats at the old place, we were located way back under the overhang of the deck above, effectively killing any view of the scoreboard or banners on the ceiling.

That was not an issue here. 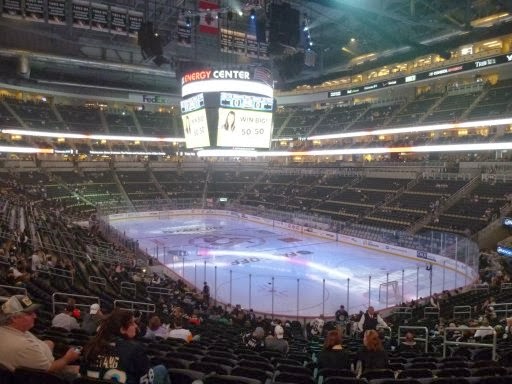 Before this trip, Sitcom Kelly told me there wasn't a bad seat in the house, and now I know what she meant.  The sight-lines were terrific from everywhere. 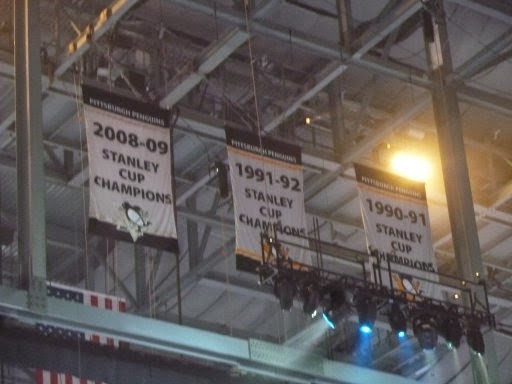 The game was enjoyable enough.  The Pens won fairly easily, 4-1, in a game where I got to see my first penalty shot.

This was Pinky’s first hockey game ever, so I got to play the teacher and show her things that are hard to pick up on TV, like the constant ballet of players coming on and off the ice during the play, the sound of sticks on puck, and the way the boards shake when the players mash into them.  Geez, I love hockey!

Because we didn't have to worry about post-game traffic, we stayed to the very end, unlike about a third of the rest of the crowd.  I just wish I would have stayed to see the awarding of the “Three Stars,” so I could have seen Marc-Andre Fleury come out waving the Jolly Roger, in support of the Buccos.  I love it how the Pittsburgh teams support each other.

In fact, the loudest I heard the crowd all night was when they showed Pirates centerfielder Andrew McCutcheon on the scoreboard, who was attending along with some of his teammates.
On the way out, we passed by an amazingly lit fountain.  One of these will be “calendar material.”  I haven’t decided which one. 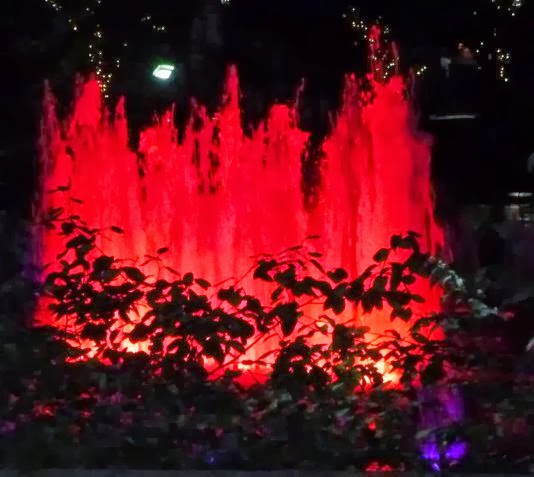 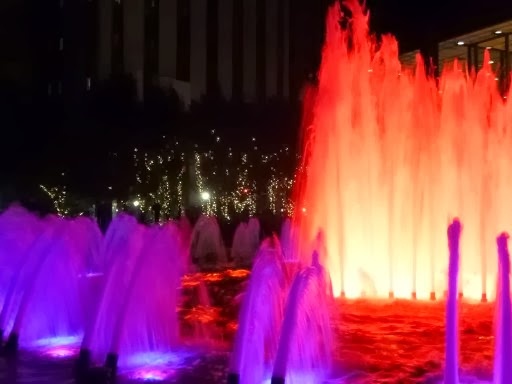 Anyway, we were back in the room for the start of the 2nd half of the Ohio State/Northwestern game.  What can I say?  I support the Bucs AND the Bucks.

This was just a quick “in and out” weekend, so I didn't seek to meet up with any family or blog friends.  But before we bugged out, we HAD to take a stroll around the most photogenic city in the country.  When we left the Penn at 9:00, they had some roads blocked off for the Mario Lemieux 6.6 race.  I told Pinky that if we stood here long enough, we’d probably see Cassie run by.  (Luckily, I didn't test that hypothesis, because I’d have been there a long-ass time.  She didn't run in this one.)

I love walking around dahntahn, especially now that the fountain at Point State Park is functioning again. 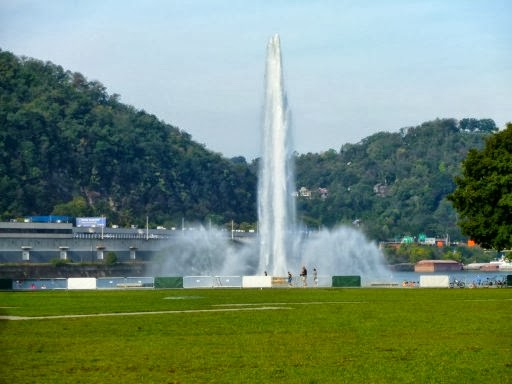 The fountain, toward The Confluence (where the Allegheny and Monongahela Rivers form the Ohio.

While we were down by the river(s), I noticed a commotion. 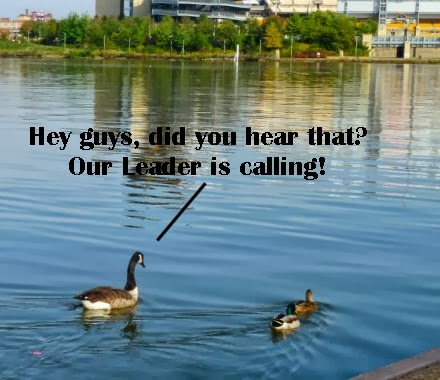 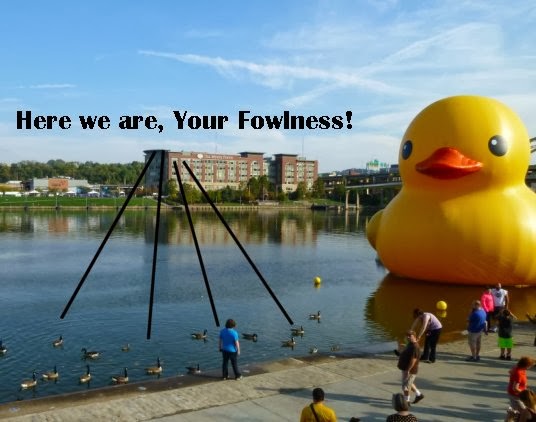 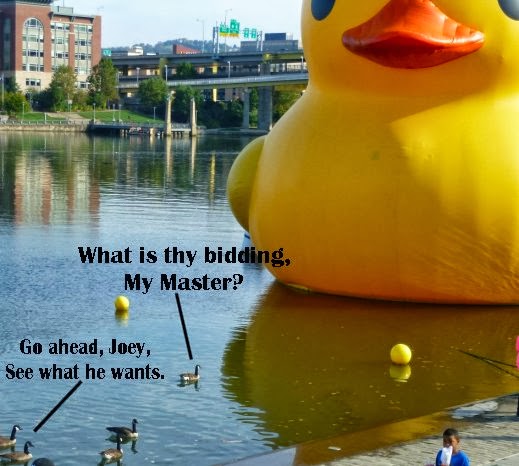 I had to leave after that.  I didn't want to infringe on their privacy.  But the whole “duck” thing quacks me up.  People were all over this thing.  It was challenging getting a picture without a dozen other people in frame.  But I think we need another artist to hang a giant inflatable “Ernie” from one of the bridges, to play with the giant ducky.  Maybe next time.

On the way back to the car, we saw this… 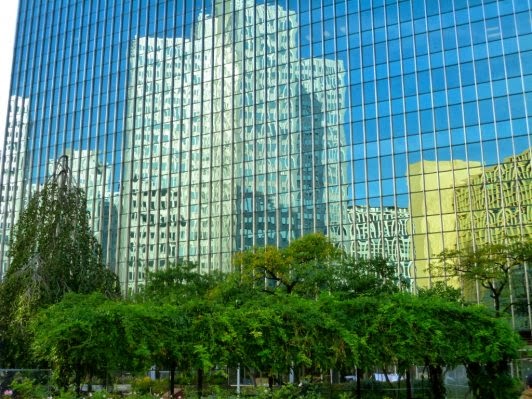 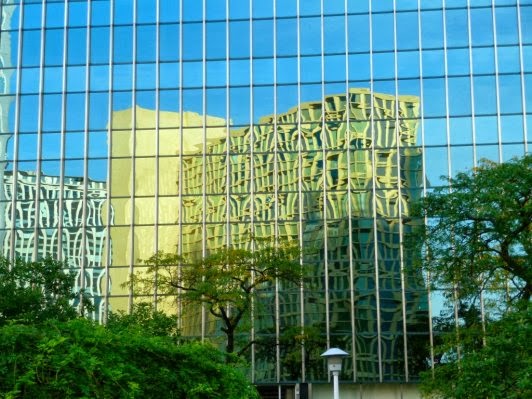 I tell you, you can see everything in Pittsburgh, from the ornate grandeur of old hotels, to the modernity of a shiny glass building, to the ridiculousness of a giant ducky floating on the river.

No wonder I love this city.
Posted by bluzdude at 6:49 PM