The Super Bowl is this Sunday and this year, I get to watch it stress-free.  The Steelers aren’t playing, and neither are any of their chief rivals, or teams that could tie them in Super Bowls won.

They are, however, playing outdoors in a cold-weather climate for the first time.  (Not counting places where it was cold during the game, as an anomaly.)  While it might be entertaining for the casual fan, to see the two teams slugging it out while braving the elements, I don’t like it.

For starters, I think the Super Bowl should be a test of team skills, not an endurance test in an ice box.  The field and weather should be neutral, with the best team winning.  A weather-neutral site factors out where the team’s city is located, and whether they play indoors.  It’s just football.

Also, I don’t like it as a fan who attends games.  (Or used to.  It’s been a while.)  A trip to the Super Bowl should be like a vacation, especially given what it costs to go.  If I’m laying out over $3,500 for a seat (I paid $2600 in 2006 for SBLX, and I’m sure it’s gone up), plus the insane New York/New Jersey hotel rates, plus a possible airplane flight, I want to enjoy myself, not see how much frozen misery I can endure.

I want palm trees, not beer-cicles.  Or I want hurricane drinks, strings of beads, and the activities associated with acquiring said beads.  I don’t want my contact lenses freezing in my eyes.

As you may recall, I wrote about going to Super Bowl XL in Detroit, when the Steelers played the Seahawks.  We knew we’d be warm during the game, because they were playing at Ford Field, which is an indoor stadium.  However, navigating around Detroit in the cold and snow proved to be miserable.  (As if it’s not miserable in Detroit on a pleasant spring day…)  We were lucky we could find anything, because the snow had covered up not only the street signs, but the additional signage (read: marker on cardboard, taped to other street signs) that led to the event parking.  (We basically had to abandon a tailgate party, for which we had already paid to attend, and hide out in a casino until they opened the gates. 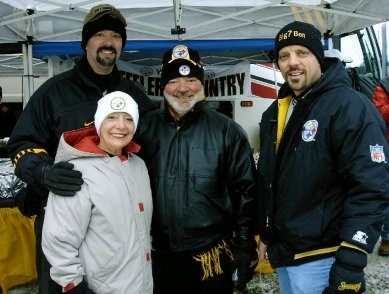 So even though it could lead to a Super Bowl being held in Pittsburgh, or here in Baltimore, I’m still against it.  Let the game be the star, not the elements.

So, about the game…  I’m picking the Broncos, and I’m rooting for them as well.  Peyton Manning is about as experienced in big games as anyone.  I like Russell Wilson, but he hasn’t really been tested under great pressure.  That’s why I’m picking Denver.

As to why I’m rooting for the Broncos, here’s the deal.  I don’t really have anything against either team.  Manning’s a good guy, but so is Wilson.  Both teams play hard and play exciting football.

You might think I’m not rooting for the Seahawks because of that little outburst from Richard Sherman, after the NFC Championship Game.  Sure, I think he could have handled that interview with a little more class, and sure, he came off like pretty much of a flaming asshole, but that stuff can happen.

He’d just made the play to win the game, then had his congratulations rebuffed by the guy who he just bested, then 10 seconds later there was a mic in his face.  Yeah, the blatant hostility shocked me, but after reflecting on it, I understand.  I’m sure he’s not proud of that moment now either.  And he certainly doesn’t deserve to be labeled a thug or a criminal.  That’s just the knee-jerk reaction from middle-aged white racists, who are always on the lookout for someone to confirm their worst suspicions.

The dude is educated out the wazoo, far more-so than his yokel critics on the Internet, and has pulled himself up out of the ghetto to become a professional athlete, and an All-Pro at that.  I guess it just goes to show that anyone can have a idiot moment.

Here’s why I don’t want the Seahawks to win: Their fans are still crying about how the officials “robbed” them of a win against the Steelers in Super Bowl XL.  It doesn’t matter that replay analysis of almost every “bad call” proved they were correct, they still complain about having the title stolen from them.

Personally, I’d blame the 3 or 4 dropped passes, lax defenses that gave up two big touchdown plays, and the inability to run a 2-minute drill.  But that probably makes me biased.

Also, they’re supposed to be these big “12th Man” superfans, but where were they in Detroit?  Steeler fans outnumbered them 85% to 15%.  They think Detroit was too far, or too expensive?  How about New York?

So, screw Seattle… Let’s Go Broncos!  Besides, a Denver win will make my friends at “A Beer for the Shower” very happy.
Posted by bluzdude at 6:33 PM