The Supreme Court heard a case this week where people are trying to remove Massachusetts’ law providing a 35’ buffer zone around clinics that provide abortions.

I haven’t really written about my stance on freedom of choice and abortion rights since I laid it all out in 2010.  (There was some great conversation in Comments after that one.)

But long story short, I am vehemently pro-choice, because nothing offends me more than one group of people forcing their sense of values on others.  In this case, a bunch of predominantly male, “small-government” lawmakers (and the social conservative who elect them) presume to know what’s best for a woman’s health and life circumstance, and have spent the last 40 years setting up hoops, roadblocks and unnecessary and invasive medical testing, in hopes of making abortions too inconvenient for those that seek them.

I feel abortions are a tragedy, and should be avoided by having unfettered access to birth control, sex education and family planning services.  When those don’t work, it’s up to the one or two people directly involved in the situation, and not a Greek chorus of holier-than-thou types who presume to know what’s best.

In reading about the case, it bothers me that the justices don’t seem to have a grasp of what’s really going on outside these clinics.  They seem far more interested in upholding the First Amendment rights of nut-jobs over the right of scared and troubled women not to be stalked, crowded, pawed at, screamed at and lied to by said nut-jobs.  Even the liberal justices seem to be missing the point.

One of the witnesses was an elderly lady, who very calmly and politely explained how she’s talked over 80 women out of having abortions.  It left the impression that these conversations are civil, like the participants are enjoying light conversation.

“Excuse me, I’m sorry to bother you but could you not have an abortion please?  They’re very bad.  Thank you.”

If only these “protesters” were sweet little old ladies offering sage advice, with butter cookies and tea...  But that’s not what’s happening.

Last night I read a link from NARAL’s Facebook page, for an article written for Cosmo by a guy who volunteers to escort women past the angry mobs, into Planned Parenthood facilities.  This is the guy who should be testifying in front of the Supreme Court.

He volunteers in Pennsylvania, where they don’t have a buffer law, but they do put up police ropes, which the protesters routinely ignore.  He documents how these people harass anyone who walks by.  (That’s how he became involved: they harassed him and his 6-month pregnant girlfriend, who happened to be passing by a Planned Parenthood office.)  They surround these troubled, terrified women, try to push flyers into their hands, call them names, shout horrible untruths about what happens during and after an abortion, and essentially function as a bullying mob.

I found a similar story by a female clinic escort, who wrote of how she came to the aid of one young woman who was being similarly accosted.  Multiple doctors had told this woman that having another baby would likely kill her, as well as the baby.  But these vultures didn’t know anything about that, nor would they care.

That’s another thing: where are these do-gooders AFTER they browbeat a woman out of ending her pregnancy?  Campaigning for food stamps, day care, after-care, or school lunch programs?  Hell no.  Those are for the lousy slackers and “takers.”

To quote the great George Carlin, with these people, “If you’re pre-born, you’re fine, if you’re pre-school, you’re fucked!”

I’ve seen this crowd before.  Remember when I went to the Super Bowl in Detroit?  These clowns were standing in the street, yelling at everyone in line. 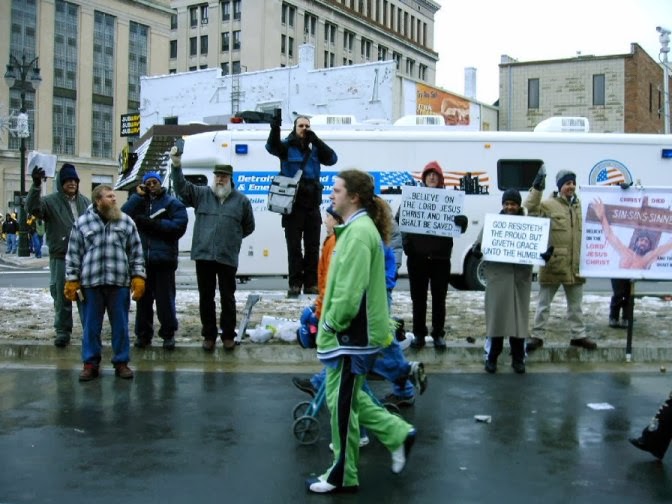 Notice how they’re all men.  Also notice that they stayed back across the street.  Obviously, they’re more eager to physically intimidate women than a line full of football fans.

Sometimes I think that I should go out and do more in the community, and doing something to aid Planned Parenthood is always the first thing that comes to mind.  I’ve given serious thought to volunteering as an escort.  But boy, would that ever be a mistake.

The guy-escort’s column basically told me all I needed to know, to determine that I’m the wrong personality type for such work.  The escort needs to be extremely non-confrontational with the protesters, because there’s nothing they would like better than to press an assault charge on a Planned Parenthood volunteer.  I don’t know that I could do that.

I’m as chill as anyone could be, and I have the protective nature required, but I completely lack the trait needed to sit back and take shit from people.  (Going to Ratbird games in a Steeler jersey tells me all I need to know about that.)

I suppose I’ll have to settle for supporting organizations like NARAL and Planned Parenthood financially, like I’ve been doing.  (Do you know you can donate to PP via the United Way?  You can even pick the state.  I pick the ones that are cutting funding to PP or enacting crippling legislation.)

I’d really hate to see the few states that do something about women’s health have their efforts erased.  As far as I can see, the right to free speech does not trump the right to be left alone.  In other words, “speak all you want, just get the fuck out of my face.”

There are a number of limitations to free speech already, like the proverbial yelling “fire” in a crowded theater, or anything limited by libel and slander laws.  Eliminating the buffer zone on account of free speech is akin to sanctioning bullying and harassment.

How long will it be before some parent sues for the right of their kid to bully, mock, tease or harass another kid?  That would be free speech too, wouldn’t it?  I wonder if anyone thought about opening THAT can of worms…
Posted by bluzdude at 1:59 PM