How Tonsils Lead to Comedy

I was reading a post from my Blog Sister, Red Pen Mama, yesterday, about how she’s considering having her young daughter’s tonsils removed, to help address a chronic sinus problem.  That got me thinking about when I got my tonsils and adenoids out.

And when I hear the word “adenoid,” all I can think about is this: 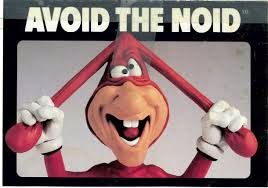 You know Domino’s created a memorable ad campaign when it’s still rattling around in your head almost 30 years later.

I was about 4 when I got my tonsils and adenoids out, and come to think of it, that was the only time I needed to go to a hospital until my first heart procedure, roughly 35 years later.  I guess I had quite a run.

I don’t remember being especially sick beforehand, other than having various allergy-related maladies.  But Mom told me I was having problems breathing through my nose.  (Yes, I was a little mouth-breather.)  I do vaguely recall being frequently told to close my mouth and breathe through my nose, but I guess it didn’t work very well.

As everyone knows, the way parents get little kids to cooperate with surgery in a big, scary hospital, is to promise them all the ice cream in the world they can eat.  As someone who was consistently deprived of Pop Tarts and the “good” cereals, this was like hitting the jackpot.  So I didn’t put up much of a fuss at all.

What strikes me as very strange, now that I think about it, is that they admitted me to the hospital the day before my surgery, and I stayed overnight.  I can’t fathom that now… it was a routine surgery even back in the mid-60s.  I don’t know why I had to be there a day early.  I guess hospital stays were a lot cheaper then.

Not that I’m complaining, mind you…  I had a blast.  I was in a big room with about 6 other boys who were getting their tonsils out too.  Our room must have looked like play time at the monkey house.  Each of us had a big, tall bed, with “crib” railings on it, which snapped up and down, depending on if they wanted us caged up or not.

That’s the first time I learned that grownups can be really sneaky.  I remember running around with the other boys, when a nurse waved me over and told me to hop up into the bed/crib.  I ran over and jumped up, the edge of the bed hitting me just about belt high.  Before I could squirm all the way up, she said, “Stop right there,” pulled up my hospital gown and hit me with the thermometer.  You know, the one they don’t put in your mouth…  She skewered me like a little Bluz-ka-bob.

Eventually all the parents disappeared, I assume they went home to put my siblings to bed and drink martinis, and the rest of us bunked down for the night.  But do you think we went to sleep?  It was hard enough to go to sleep at home with my one brother in a room, in my own bed.  But a room full of other 4 and 5-year olds?  Please…  We were talking and carrying on like it was a slumber party.

But suddenly, and quite urgently, I had to pee.  The nurses told us that if we had to pee in the night, we were to call them, and they’d bring the bedpan (which really looked like a big tin jug).  But I was too shy to yell out from the dark, to some stranger, about my bathroom needs.  And I had seen where they put the “jug.”  It was on a lower shelf in a cabinet between our beds.

After consulting with my roommates, and with their enthusiastic approval and encouragement, I decided I should get out of bed and use the jug.  The railings?  Seriously?  I was up and over those like a tiny ninja.  (Young boys really are part monkey, I swear.)

I went over the bars, found the jug, used it, and put it back in the cabinet.  As I ninja’d back into bed, I wondered if anyone would even notice.

They noticed.  And I noticed they noticed the second I opened my eyes that morning, and found a net over my bed/crib.  I mean it… a big, freakin’, white net.  I assumed that mean the nurse was not amused.  Of course, I hadn’t been amused by her temperature-taking tactics, so… “touché.”

It wasn’t until this very morning, while I was emailing with my mom to firm up the details of the story, that I learned that she was the one that discovered my late-night jailbreak.  She ratted me out to the nurses, and they put up the netting.

First I’m deprived of Pop Tarts and am forced to eat eggs, pancakes, waffles and good-for-you cereal, and then I’m caged up like a wild, stealth-peeing animal?  For shame…

Anyway, they wheeled us all in for surgery that morning and we all made it back out.  I remember waking up and feeling foggy and sore-throated.  I could barely even say “ice cream.”  I think the hospital gave me a measly little cup of institutional vanilla, with which I was aggressively unimpressed.

I think they took me home that night… I don’t remember another night in the cage.  As a present for my recuperation, my parents got me a new Bill Cosby album, the one that has a long bit about getting his own tonsils out.  It hurt to laugh at first, but by the second day, I was pretty much back on my feet and up to no good.

Director’s DVD Commentary: I cut my comedy baby-teeth on the old Bill Cosby records.  I’d listen to them over and over… I didn’t even “get” a lot of the jokes, but they were still funny.  No one can describe being in the midst of chaos, like Cos.  The Tonsils bit was a favorite, as was Buck-Buck (which contained the origins of Fat Albert), Kindergarten, the Chicken Heart, Bill’s no-good little brothers, Noah and the Ark, The Great Go-Kart Race, Karate Schools, playing football for Temple against Hofstra University, and his masterpiece album, “To Russell, my Brother, Whom I Slept With.”

The title track took up an entire album side, and was all about him and his brother messing around when they were supposed to be in bed, fighting with each other and trying to avoid having their Dad come up there with The Belt.  It’s no understatement that this one hit home with my brother and me. 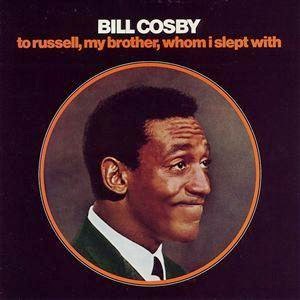 If any of your kids have an interest in comedy, these albums are still available.  I’ve even downloaded a bunch of them as MP3s, because for “some reason,” the old albums are all scratched up.  I’m sure some of the references will be a little dated, but they’re funny, clean, relatable to children, and contain nary a swear word.

I mean, I grew up on them and look how I turned out!