Today is my brother’s birthday; the day he joins me here in Club Five-Oh.

I know I’ve written a lot about my nephews, but not so much about my brother.  It’s not that he isn’t blog-worthy; it’s just that he’s a professional and you never know who might trip over this blog.  I’d hate for him to be up for some big promotion and then have his prospective boss find a post about the sordid stories of his past.

Granted, I tell the stories about the goofy shit I did, but that’s just because I’m about as accomplished as I’m going to get.  While I was having fun getting a degree in radio, my brother was taking more practical things like accounting and business classes.  So he still has room to maneuver and I’m loathe to impede that.

He’s the one that did everything right.  He got a serious degree, went to work in an office, moved up the food chain, got married, and stayed that way.  He produced the only grandchildren among our parents’ kids.  Getting to hang out with him was the reason I moved from Albany to Baltimore.  (Well, my sister too, until she left the state a couple years after I got here.)

People may think I’m the funny one, (because I’m probably more obvious about it), but he’s the funniest guy I know.  He’s always got a funny way of putting things, and putting things together.  He’s always been a good mimic, with total recall for movie quotes.

In fact, Mom was just telling the story to the boys this weekend, about how Ed almost made her wet her pants during a long car trip, as he channeled the Bill Murray character from “Caddyshack.”  The real funny part was that Mom hadn’t seen “Caddyshack” yet, and thought he was taking on some kind of demented personality of his own.

Ed and I are about two and a half years apart and we pretty much grew up as Batman and Robin. 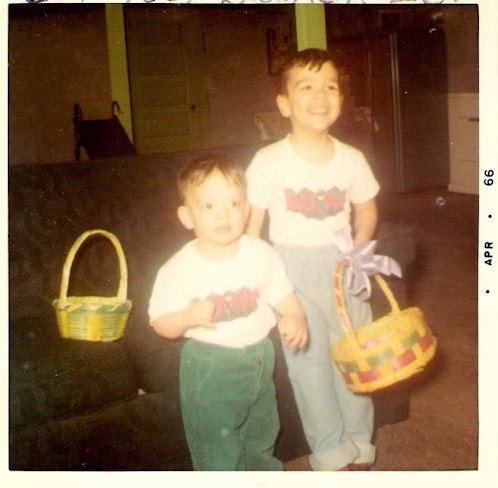 As the elder, I was always Batman.   But it’s funny because I’m the one in the yellow cape now.  He’s the respectable one and I’m the one with the standees in my apartment and hats on the wall.

It’s been cool with us both working for the same company, in the same building.  Upon meeting us most people at work seem to think he’s the older brother.  Maybe it’s because he’s been there longer, or is much higher up in the organization.  Or maybe it’s his much more serious “professional” demeanor.

It wasn’t always like this.  My brother is very fortunate he made it out of adolescence.  By the time he was in junior high and high school, we were fighting like cats and dogs.  That wit of his I spoke of earlier manifested itself mostly in finding that flaw in other people, of which they were most self-conscious, and pounding the hell out of it.

Believe me, my buddies, the Vice President of Hell No and the Chairman of Fuck Off would have pounded the living crap out of him if I hadn’t (constantly) interceded.  I had to walk that line that most older brothers have to, when it comes to delivering an attitude adjustment to the younger brother.  You want to smack them hard enough to deliver the message, but not so hard that they run crying to Mom and Dad.  Because then, no matter what the younger one did first, it’s your fault and you would be the one in trouble. 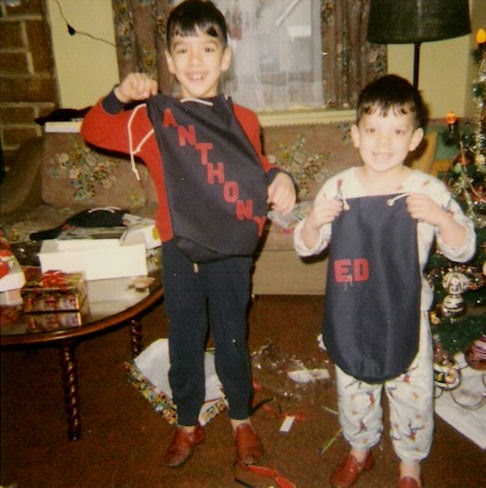 Mom had a sense of humor about it though.  She often said, “I never beat any of my children, but with Edward, I often regret that.”

It helped when I started college, because even though I commuted, it got me out of the house most of the time.  But what really helped was when he went away to Ohio State.  I believe he started his freshman year when I was a senior.

Remember, we lived out in the country, in a very small town, surround by other very small towns.  It was a very white-bread area, full of essentially similar kids, who attended a well-run high school.  He and his friends were pretty big fish in their small pond.

But a school like OSU, with its 65,000 students, was an entirely different kind of pond.  Bro wasn’t such a king-shit in Columbus, and when he came back to town, he had a completely different attitude.  It was like he found a sense of humility.  Or, he just grew up.

But the end result of it was that we became much better friends.  I actually enjoyed his company, rather than just tolerating it.  And that’s how it’s been ever since.

I’ve told you just about all of my good stories about the adventures of my youth.  I only wish my brother wrote a blog, because if you ever heard his stories, like the one that personally involves the nation’s 40th president, you’d be on the freakin’ floor.  I’d cover them here, but as I said above, they’re not really mine to tell.  I’d get the laughs and he would have to bear the consequences.

We were having a Barn Party one summer night; I forget the occasion.  It might just have been an informal neighborhood get-together in the Barn… with beer and loud music.  Like I said, we were out in the country, and in the back yard, we had this big “vapor light,” hung high on the back of the house.  It literally lit up the entire back yard.

You know what a bright light attracts?  Bugs.  And you know what bugs attract?  Bats!  So when we saw the bats buzzing around and feasting on the bugs, somebody piped up with an idea.  If you moistened some toilet paper, wadded it up, and tossed it up in the air, the bats would chase it.  Thinking it was a big juicy bug, they’d grab it with their “hands” and then sensing it was not a meal, they’d release it.

So we played catch with the bats for a while.  Then Ed decided it would be more fun to try this from up on top of our garage.  (I learned not to ask him “why,” about things like that.)  So up on the steeply pointed garage roof, he climbed.  (It was an easy climb… saw-horse to outhouse roof, onto the storage shed roof, and then onto the garage. They were all positioned back to back.)

So, while teetering atop the crest of the garage, Ed started tossing up the TP bombs.  In doing so, he learned a valuable lesson… When you toss TP to the bats, they don’t always grab it at the highest point.  Sometimes, they wait until the TP has fallen right back down by your head.

One of those bats dove after that TP and damn near went right into Ed’s face. 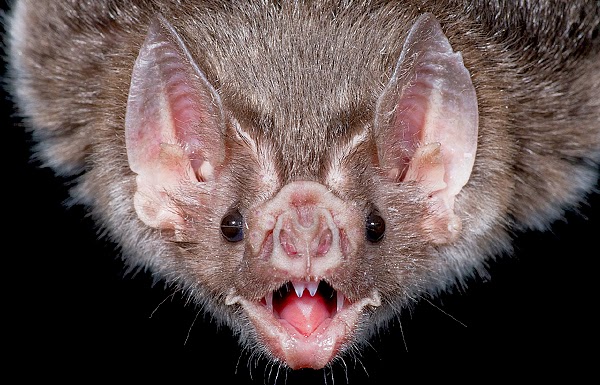 He recoiled so hard, he almost rolled right off the garage.  That put an end to the bat-baiting for the night.

Although we had to get up early for TP cleanup detail the next morning, because it looked like there had been a hail storm located exclusively over the back yard.

With that, I bid a Happy 50 to my brother Ed, wing-man, teammate and chief advisor.  Here’s to rockin’ the next 50… 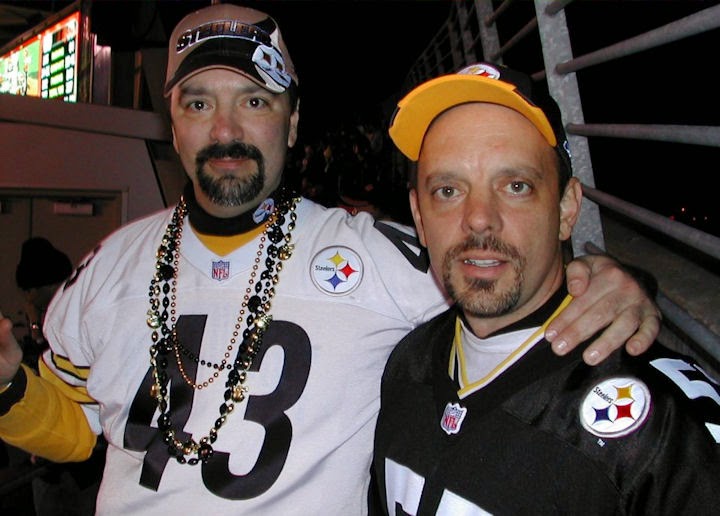