I’ll tell you.  I expect to have a grand summer.  This will be the first time in a very long time that I will be living alone, and not broke.  When I first changed departments back in August of 2006, it came with a significant raise… a “quality-of-life-changing” raise.  But almost immediately after that happened, I basically began providing for a significant other.

In other words, I’ve never had the opportunity to single AND have some extra scratch.

Of course, I have to play it close to the vest for a while, to make back up the scratch I was set back over the last 4 months, which was considerable.  And I also have to replace a number of thing that I threw out, because hers were newer or better.  Thank goodness I put my foot down on parting with my furniture.

But I should have enough to allow me to see a bunch of Orioles games.  I can decide to go down to the ballpark after work just because it looks like a nice night.  Or maybe take a jaunt into The Burgh to see the Buccos a time or two, and maybe hang out with my blog-brothers and sisters.  With apologies to George Costanza, it'll be the Summer of Bluz!

It’s funny though.  I think about where to go if I want to “meet someone,” and I can’t help but think of that line from 30-Rock, where Liz Lemon is talking to a geeky film editor (played by Paul Giamatti). 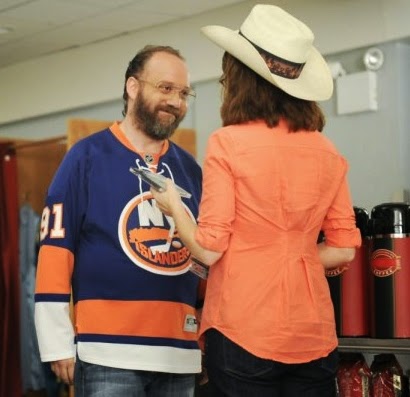 “I went to hockey camp and joined up for Civil War re-enactments, but I still can’t seem to find the women.”*

That’s me, only they’re ballgames.  Maybe it’s time for me to go to one of those Planned Parenthood benefits to which I’m always getting emailed invites.  No, I wouldn’t go to a PP benefit just to hit on women.  That’s kind of creepy.  But it’s a cause I believe in, and there figures to be a lot more single women there than at a baseball game.

Maybe instead of doing like my friend Sherry, with her 52 at 52 series of activities, I’ll trim it down to, say, 1 at 52, and step out of my comfort zone long enough to go to a PP event.  Just as long as there is no Penguins game, or anything else good on TV…

Back in 2010, I wrote a whole post on the advantages of being a Bachelor Guy.  I just had a look, and it still holds up.  There are a number of up-sides to having complete autonomy.

But I also intend to learn from my mistakes.  I need to take better care of the place.  I need to call the landlord when something is wrong or breaks, instead of just making do.  I vow to keep the goofy shit at bay, and only put things on the wall that are framed.  I can still keep an interesting place without cramming things into every vertical square foot in the room.  And I’ll probably keep the Hat Wall in the hallway.

I’m not saying anyone will mistake it for a grownup’s apartment, but it will be a step in the right direction.

* I paraphrased the line from memory.  Spent 20 minutes trying to find the exact quote online, but was unsuccessful.  But you get the point.
Posted by bluzdude at 5:56 PM